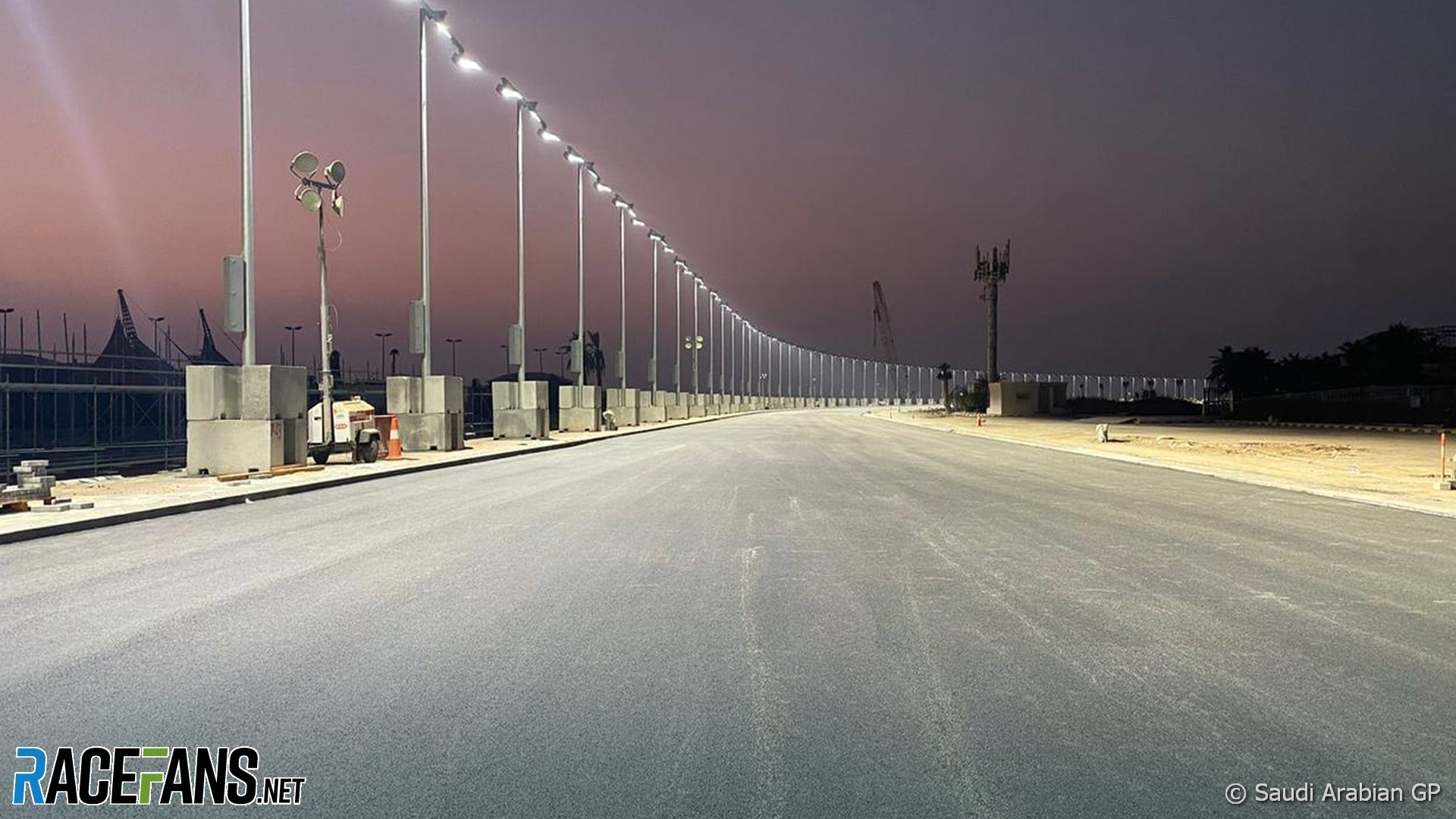 The team building the Jeddah Corniche Circuit is making “extraordinary” progress as the deadline to complete the venue in time for its first race draws nearer.

The opening practice session for the inaugural Saudi Arabian Grand Prix is due to take place five weeks from today.

Tilke Engineering was appointed to design the street circuit partly because of their experience in delivering major construction projects quickly. Bahrain-based MRK 1 Consulting, which has worked with Tilke on previous projects, is also involved in the operation of the new track in Jeddah.

MRK 1 managing director Mark Hughes told RaceFans the eight-month timeframe Jeddah’s circuit is being constructed in is one of the shortest they have worked on.

“From my experience and from having worked on projects, Bahrain was built in 16 months, Abu Dhabi was built in 18 months,” said Hughes. “We built the track in Thailand: From ground-breaking to our first event was 12 months at Buriram and that was another Tilke project. Tilke’s experience of fast track projects is quite exceptional.”

Hughes called the rate of progress in Jeddah “extraordinary”. He last visited the site three weeks ago and receives regular updates from his team on the ground. “What they’ve managed to achieve over the last few weeks is miraculous,” he said.

FIA Formula 1 race director Michael Masi was due to visit the site this week to check on progress and F1 representatives have also inspected the construction work.

“We also have regular visits from Formula 1 themselves, a number of Ross [Brawn’s] team have been there over the past couple of months. The plan is the race will happen on the fifth of December, that will go ahead and I believe it will. From the progress I’ve seen, I’ve got no reason to doubt it.”

Nonetheless he conceded that completing construction within eight months is “a big ask” even compared to other rapidly completed projects. “With the amount of time it took to build Bahrain, Abu Dhabi and Buriram, I think construction started on the 1st of April in Jeddah and the race is in December, that’s a significantly condensed timeframe.”

The temporary layout is being built as an extension to Jeddah’s waterfront corniche. “It’s a series of two roads that run parallel along the coastline. One lane takes you north then you get to a roundabout and come back and go south.

“That runs along the whole of the Jeddah city, and it’s an extension of that effectively so that we will join the existing road network.

“All of the barriers that are there can come out, they’re all temporary concrete barriers with sections of fencing, and that track can be reverted back to a public highway after the event.”

Its roads will not be opened for public use until after next year’s race, which has been given a March date on the 2022 F1 calendar.

“The authorities have said okay, we will leave everything in place between December between the first and second race, which makes absolute sense [because of] the cost of taking everything out, storing and putting it back,” explained Hughes. “You’d have to start rebuilding it almost as soon as you demobilised it.

“So in the long term, it will be highways. In the infield, there are things like five-a-side football pitches and basketball courts and things. So it’s very much a sports and leisure zone. There are cafes and restaurants that are being built on the waterside, it will be an extension of the existing corniche.”