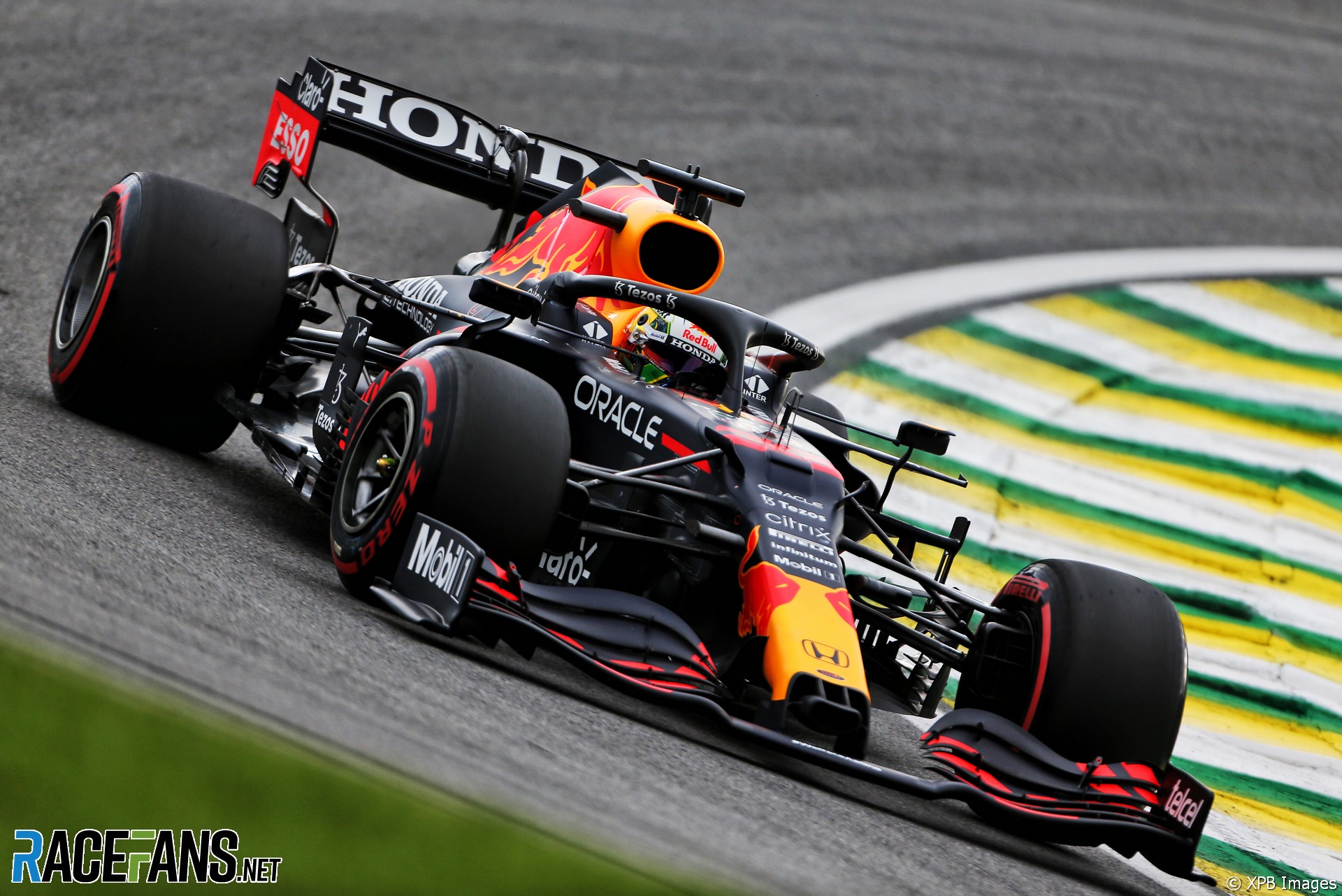 Lewis Hamilton’s rear wing was the chief focus of attention after qualifying, once FIA technical delegate Jo Bauer confirmed it had failed an inspection, putting his pole position for the sprint qualifying race in doubt.

But prior to that, a more visible problem on his championship rival’s rear wing indicated Red Bull may not have got on top of their recent recent wing woes.

Max Verstappen‘s DRS flap was seen moving unusually as he approached the braking zone at turn one, the fastest point on the Interlagos circuit, during qualifying.

Unlike Hamilton’s rear wing, Verstappen’s passed all the post-session checks. Nonetheless, the level of vibration seen is obviously undesirable, and the wing clearly didn’t perform as intended. RaceFans understands the team experienced a mechanical problem which did not improve their performance.

The problem may also explain why Verstappen inspected his own rear wing closely after qualifying before turning his attention to his championship rival’s, in a video which appears to have attracted the interest of the stewards.

This is the third race weekend in a row in which the team has experienced a problem with its rear wing. The first occasion was at the Circuit of the Americas where all teams suffered the effect of severe bumps at the track. Red Bull made various repairs to their wings, and Verstappen went on to win the United States Grand Prix.

At the México City Grand Prix last weekend, the team had to repair its wings after what Verstappen described as a ‘crack’ was discovered final practice. Having been comfortably quickest in that session, they were beaten to the front row of the grid by Mercedes. However circumstantial factors contributed to the defeat, the team insisted the wing repair wasn’t the cause of their loss of performance, and Verstappen scored a comfortable win in Sunday’s race.

Red Bull has a further hour of practice on Saturday morning to address the problem before the sprint qualifying race and Sunday’s Grand Prix. As this is a sprint qualifying weekend, parc fermé restrictions are already in force – earlier than they would be at a regular event, which prevents all teams from replacing certain components.

However some exceptions to this are permitted under the regulations, which state: “At an event where a sprint qualifying session is scheduled, replacement parts that are different in design will be permitted provided that the part is of a specification that has been used previously in a qualifying practice session or a race.”

“In such cases, the competitor should inform the FIA prior to the start of the sprint qualifying session of any part where this may be necessary,” it adds. “Any parts removed will be retained by the FIA.”

It remains to be seen what steps Red Bull will have to take to get the undesirable rear wing behaviour seen in qualifying under control, and whether it will affect the rest of their weekend. As they showed in Mexico, their ability to solve these kinds of problems in the field is first-rate.