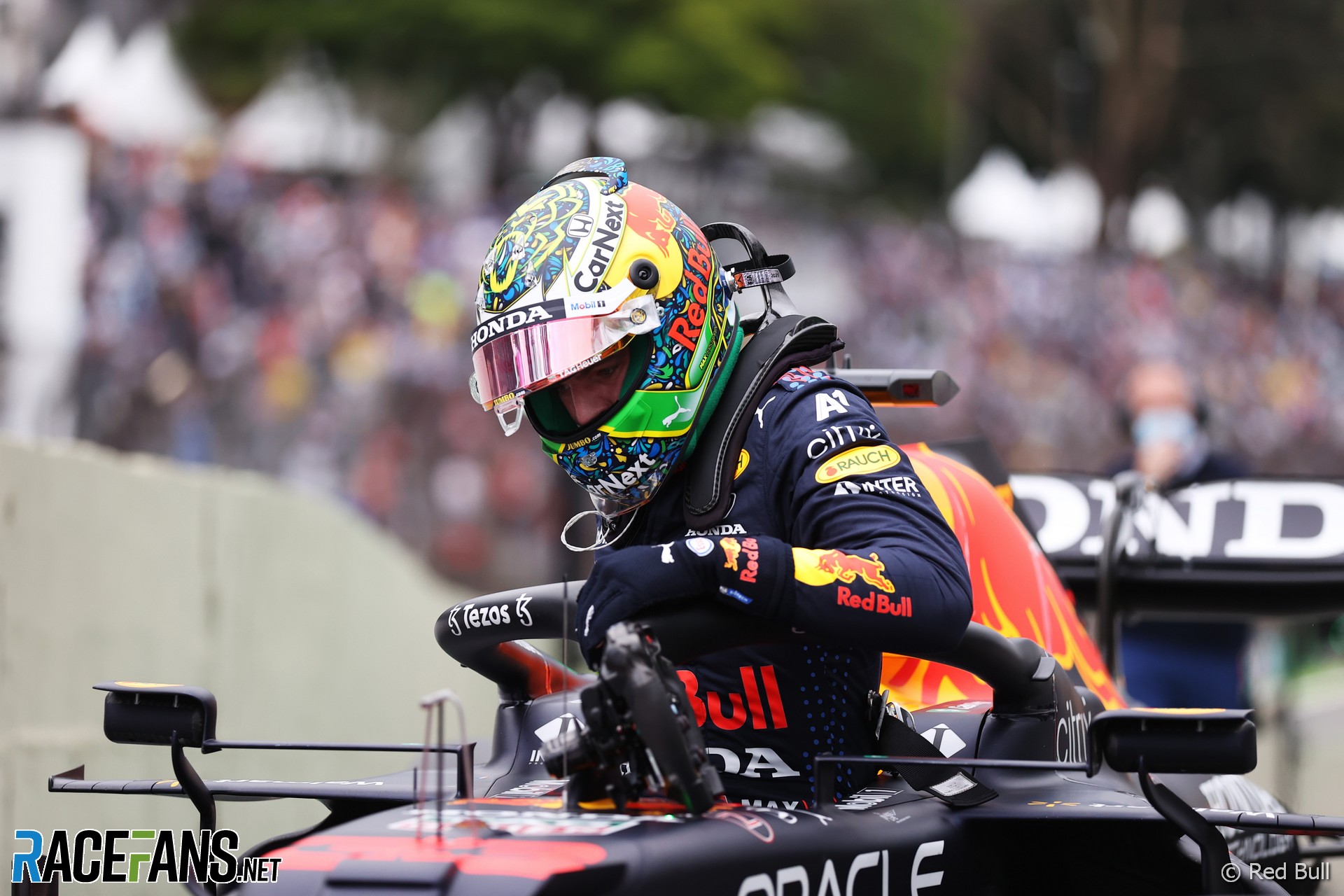 [raceweekendpromotion]Max Verstappen has been fined €50,000 (£42,600) after the stewards found he broke parc ferme restrictions by touching Lewis Hamilton’s rear wing after qualifying.

Amateur video shot by a fan, CCTV footage and onboard material from several cars was used to examine the moment when Verstappen inspected the rear of Hamilton’s car after the Mercedes driver claimed pole position for today’s sprint qualifying race. The Mercedes subsequently failed a technical inspection of the rear wing DRS flap, the outcome of which is still being considered by the stewards.

Verstappen’s action was a “breach of the regulation” with “has potential for serious consequences”, the stewards ruled. However they decided he touched the wing with “insignificant” force and did “no direct harm”.

They therefore decided to limit his penalty to a fine. Verstappen qualified second on the grid and stands to inherit pole position if Hamilton is penalised for the DRS infringement, as is widely expected.

The stewards heard from the driver of car 33 (Max Verstappen) and team representative.

The stewards also examined a fan video taken from across the track, CCTV video footage taken from pit lane and in car footage from car 14, car 33, car 44 and car 77. In all, these videos gave a clear picture of what occurred in parc fermé following the qualifying session.

Verstappen exits the car, then moves to the rear of his car. He then takes his gloves off and puts his right hand at the slot-gap of the rear wing of his car. He then moves to car 44 and repeats the exercise, touching the rear wing in two places, once on either side of the DRS actuation device, but on the bottom rear side of the wing, in the area of the slot gap and never near the actuator or the end fixation points.

It is clear to the stewards that it has become a habit of the drivers to touch cars after qualifying and the races. This was also the explanation of Verstappen, that it was simply habit to touch this area of the car which has been a point of speculation in recent races between both teams. This general tendency has been seen as mostly harmless and so has not been uniformly policed. Nevertheless, it is a breach of the parc fermé regulation and has significant potential to cause harm.

Considering the fact that no direct harm was caused in this case, in the opinion of the stewards, and that no earlier precedent of penalties for this exists – on the one hand; but that it is a breach of the regulation and has potential for serious consequences on the other, the stewards determine to take action in this case and order a fine of €50,000. The stewards further note that it is intended that all teams and drivers take notice that future breaches may incur different penalties from the stewards of those events.

61 comments on “Verstappen fined €50,000 as stewards rule he did ‘no direct harm’ touching Hamilton’s wing”