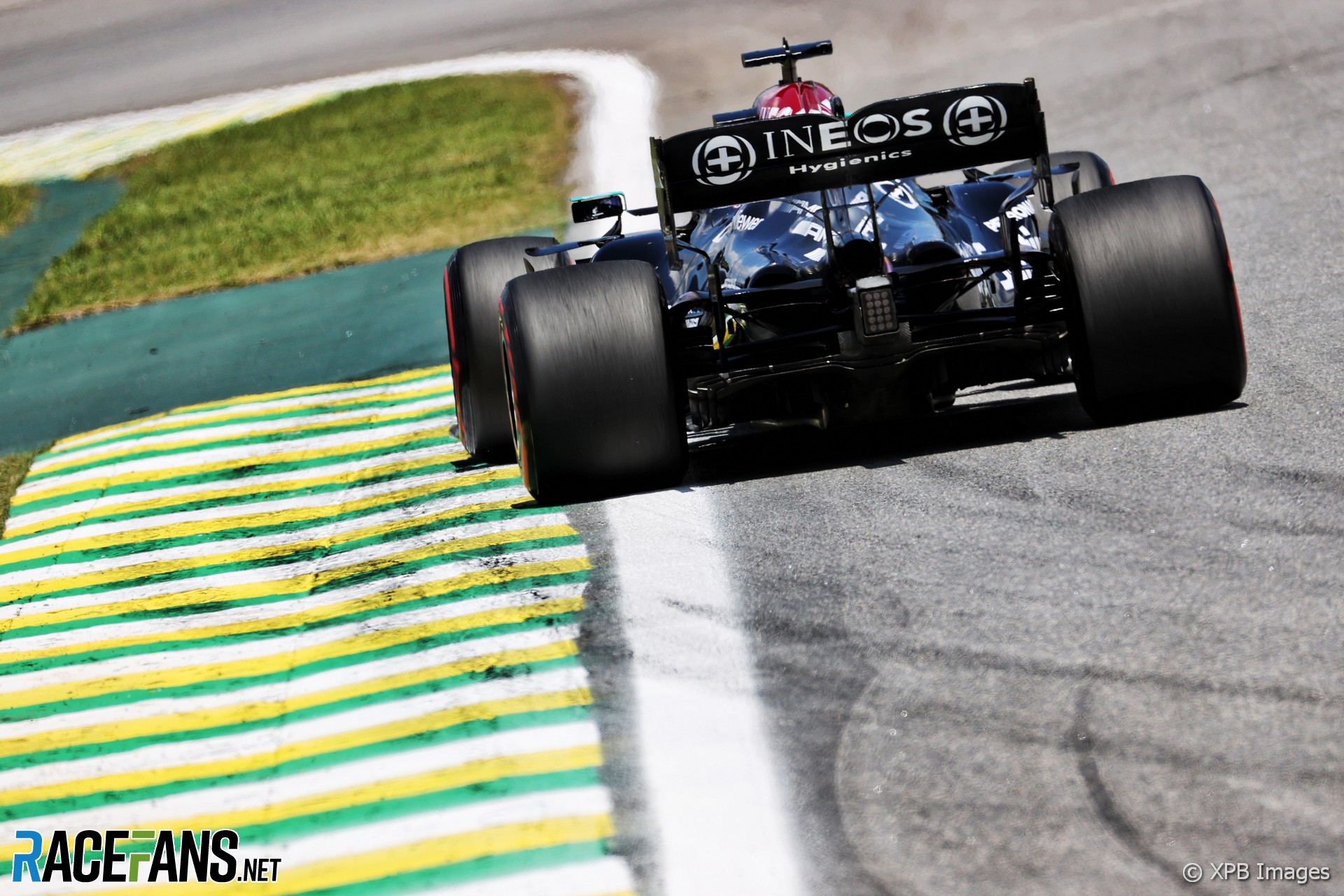 [raceweekendpromotion]Mercedes team principal Toto Wolff said the team were astonished Lewis Hamilton was disqualified from the results of qualifying after his rear wing failed a technical inspection.

Wolff said the the team believe the wing was damaged during qualifying, which led it to fail a test of its Drag Reduction System. Team representatives met with the stewards on Friday evening at Interlagos, and again the following morning, before their decision was announced after Saturday’s final practice session.

“Until late this afternoon we believed that it was okay because the wing was damaged,” said Wolff. “One side was okay, the middle was okay, the right was not okay.

“That means we actually had a performance disadvantage. And we thought that, in consideration of all these aspects, the FIA would say there was damage and therefore, we weren’t in breach of the regulations. They also said there was nothing that happened with intent from our side.”

A Mercedes crew member who observed Hamilton’s car failing the test “came back and said ‘something’s broken’ because of the odd behaviour of the rear wing”, Wolff added. As a result he didn’t initially believe the team’s sporting director Ron Meadows when he later relayed the news Hamilton had lost his pole position for the sprint qualifying race.

“We were reading ‘disqualified’ which honestly I couldn’t believe,” he said. “I thought that Ron Meadows was taking a joke when I saw the WhatsApp. So strange things happen but you have to take it on the chin.”

Following the news, Hamilton raced from the back of the grid to finish fifth in the sprint race, which Valtteri Bottas won in the other Mercedes. “The last 60 minutes of motor racing form Valtteri and from Lewis just brought all the enjoyment back with all the frustrations that happened before,” said Wolff.

Hamilton arrived in Brazil 19 points behind Verstappen in the championship with four races remaining. Wolff said the team’s “disbelief how things went” was mixed with “a certain respect for the stewards’ difficulty in that situation, because it’s certainly not easy ruling on such a [contentious] topic, where it’s about a world championship and they need to look at the at the specific situation and maybe not at the big picture.”

Nonetheless he was dissatisfied that the team hadn’t been given the opportunity to fix the fault without incurring a penalty.

“I think how the process went from telling us, discovering that we’ve marginally failed the test – we’re speaking 0.2 of a millimetre – to not allowing this to be fixed like the normal protocol would be, but rather it being reported to the stewards, the bullet was out of the gun and I think that put the stewards in a very difficult situation to come up with the right judgement.”

Wolff pointed out other teams have been permitted to repair parts of their car under parc ferme situations during sessions in the past. Mercedes were unfortunate, he believes, as the damage was discovered after the session had concluded.

“In the past, sometimes there was a common sense buffer that didn’t exist yesterday or today,” he said. “But it’s all to the dot within the regulations so you need to respect that.

“You need to acknowledge that it’s a fierce fight with several entities involved or stakeholders involved and take it on the chin.”

Mercedes had the option to appeal against the decision, which would have reinstated Hamilton to pole position for the sprint qualifying race. However had they done that and the appeal failed, Hamilton would have left the weekend point-less.

“We would have liked to show the weaknesses of the arguments or the system,” said Wolff. “We didn’t because we didn’t want to lose all points for today and tomorrow in case of a failed appeal, and it would drag the whole decision a few weeks out.

“We need to do the racing on the track and if we lose, then we lose. And if we win, then we win.”

Mercedes will be more likely to query the legality of other teams’ parts as a result of today’s decision, said Wolff.

“Something went against the modus operandi these last 24 hours which was either under pressure from other stakeholders or just different and if the modus operandi is different now you maybe need to look at others also with a more strict eye and severe eye. I can tell you that in the next few races, we’re going to look at every single race tape that’s going to fall off a car and ask questions.

“If such thing as gentlemen’s agreement exists in Formula 1 – because there ain’t no gentleman – then now it doesn’t anymore. So there you have no millimetre of leniency of fixing things on a car. If it’s broken, it’s broken. You can’t touch it. And this is how it’s going to go this year.”

He cited repairs Red Bull made to their rear wings during qualifying for the Mexico City Grand Prix as an example of an occasion when teams had been able to make repairs under parc ferme conditions.

“This time it was judged, and this is in the [statement] of the stewards, that if it would have happened during the session, we would have been allowed to fix it. But not at the end of the session, when both are parc ferme situations.

“So you can ask why during the session and not at the end of the session. But anyways, it is what it is and I think we can probably pick examples either way.”