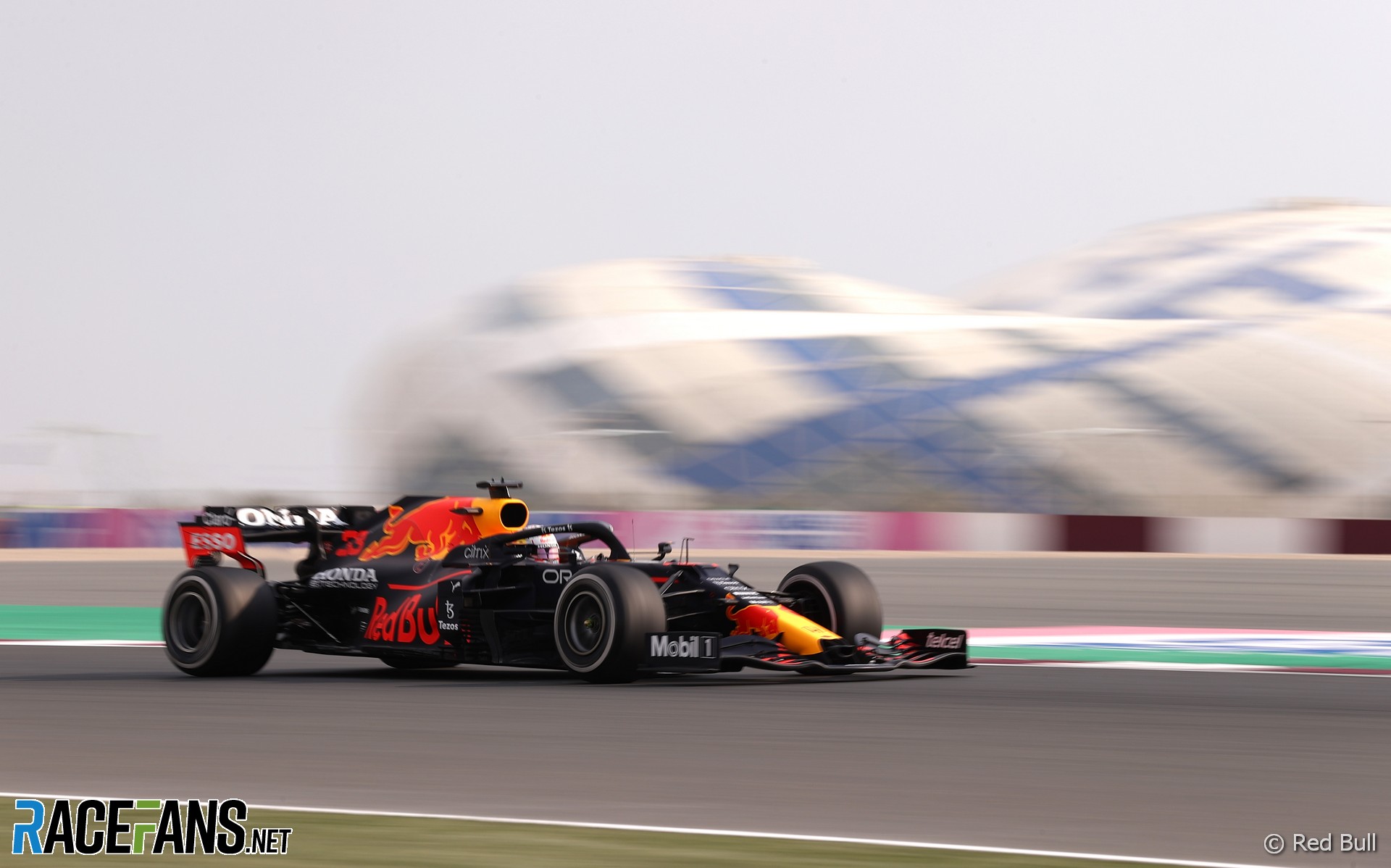 Max Verstappen comfortably led Formula 1’s first ever session at the Losail International Circuit by over four-tenths of a second.

His closest rival was not either of the Mercedes drivers, but former team mate Pierre Gasly in his AlphaTauri. The pair of W12s came next, but Verstappen’s championship rival Lewis Hamilton was over three-quarters of a second slower having reported a lack of power and pitted briefly due to a car problem.

The Losail circuit was, as expected, dusty and dirty as practice began. The track temperature started at 42C and fell to 38C over the course of the session, as the peak of afternoon heat began to ebb.

Drivers ran wide over red and white kerbs, in the first half of the session, several scuffing the floors of their cars. Mick Schumacher had a curious off that saw him cut the inside of turn seven slightly and kick up sand onto the already dirty track – he repeated the error there later in the session, going deep into the gravel at turn seven and having to almost excavate his car, dropping a large amount of stones into kerbs and back onto the circuit as he gingerly made his way back to the pits during the final minutes of the session.

Several other drivers had trouble with kerbs, notably Lando Norris and Hamilton. Norris triggered an emergency switch on his car and some damage to the floor going over the green and white kerb on the outside of turn 14 and had to pit with a loss of power, however, he was able to return to the track in the final final four minutes of the session. Hamilton suffered a similar but less dramatic issue, after going wide at the same place and having to pit for what seemed to be front wing repairs, coming back out in the last three minutes of first practice.

Hamilton had also complained, early on in the session, of being “massively down on power” and been asking his team, during the hour of first practice, where he was losing out compared to Valtteri Bottas and Verstappen.

Verstappen was fastest all session, with the Mercedes cars seeming to take a relatively long time to warm up to the layout. Norris was second fastest for most of the first half an hour, before Bottas, Hamilton and Yuki Tsunoda passed him on drivers’ second runs. Gasly’s fast time was set in the final moments of the session.

Carlos Sainz Jnr was frustrated by traffic during his soft tyre runs, unable to set a representative lap until the last minutes of the session, when he beat team mate Charles Leclerc for sixth-fastest. Sergio Perez was the slowest Honda-powered driver, more than a second back from Verstappen, despite doing most of his running on soft tyres.

Esteban Ocon, ninth-fastest, was more than three quarters of a second quicker than team mate Fernando Alonso, who only managed 17th. The two McLarens took tenth and eleventh place in the timings, Norris ahead of Ricciardo, unable to improve on his initially good time due to pitting for repairs.

Lance Stroll suffered a hydraulic failure mid-session which saw him limp back to the pits and not return to the track, severely limiting his running. Meanwhile, team mate Sebastian Vettel repeatedly complained of things loose in the cockpit of his car, including by his left foot and an electrical cable that he had to hold down with his thigh, according to his radio messages.