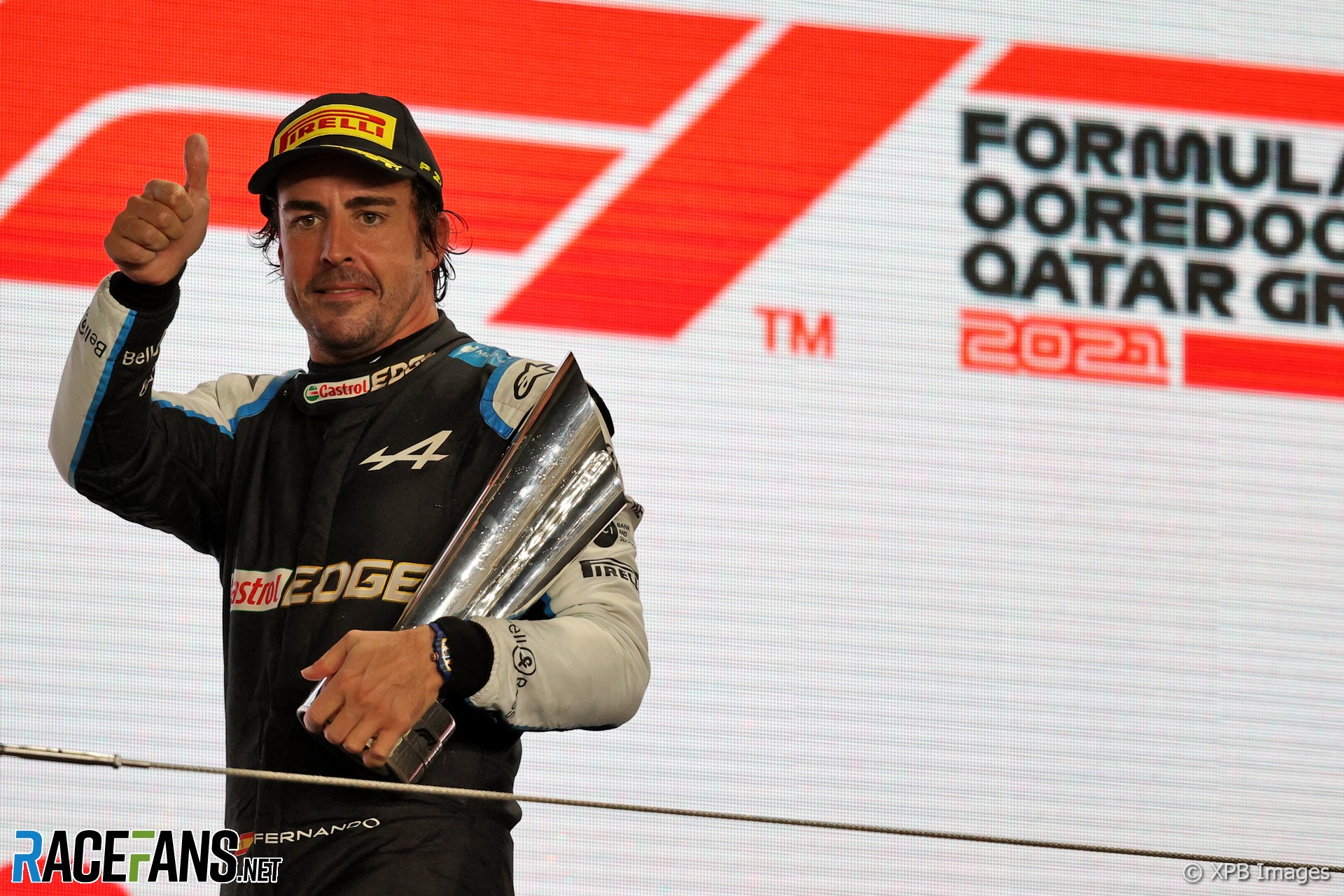 Fernando Alonso said he’d been waiting a long time to return to a Formula 1 podium following his third-place finish in the Qatar Grand Prix.

He reached the rostrum for the first time in seven years having started third, after grid penalties for Valtteri Bottas and Max Verstappen were applied after qualifying. He held onto the position thanks to a risky one-stop strategy on a day when several of his rivals suffered punctures.

“We planned one-stop from the beginning but we never knew how bad was the wear and degradation, it’s a new race for everybody,” remarked Alonso. “But I think it was quite well executed in the race, [the] pit stop was fantastic, the team was great and the reliability of the car is superb – and they deserve it.”

He did 23 laps on his first set of soft tyres, putting him in the window for a one-stop strategy. There were concerns over whether Alonso could make a 34-lap stint on the hard tyres work, especially after drivers such as Lando Norris, George Russell, and Nicholas Latifi suffered late tyre failures.

But he was able to manage his rubber to the end, aimed by a late Virtual Safety Car intervention for Latifi’s stopped Williams, which delayed the rapidly-closing Sergio Perez behind him.

Alonso finished 2.8 seconds ahead of the Red Bull driver for the final podium position – his first since finishing second in the 2014 Hungarian Grand Prix.

“Unbelievable,” said Alonso. “Seven years, but finally we got it. We were close a couple of races but not enough. Sochi was the last possibility.”

He admitted he hoped “to be leading after lap one” as he started on the soft rubber. “I thought, with the red tyre, I could have a go on Lewis Hamilton][. But I couldn’t.

“Then with Checo it was very close at the end. But very happy for the team, also Esteban [Ocon] P5 – so a good Sunday.”

“I am enjoying it,” added Alonso, who returned to F1 this year after sitting out two seconds. “I was waiting so long for this, I’m happy!” he exclaimed.

With Alonso third and Ocon fifth, plus the two AlphaTauris of Pierre Gasly and Yuki Tsunoda finishing out of the points, Alpine now have a 25 point lead over AlphaTauri for fifth in the constructors’ championship, with just two races left.