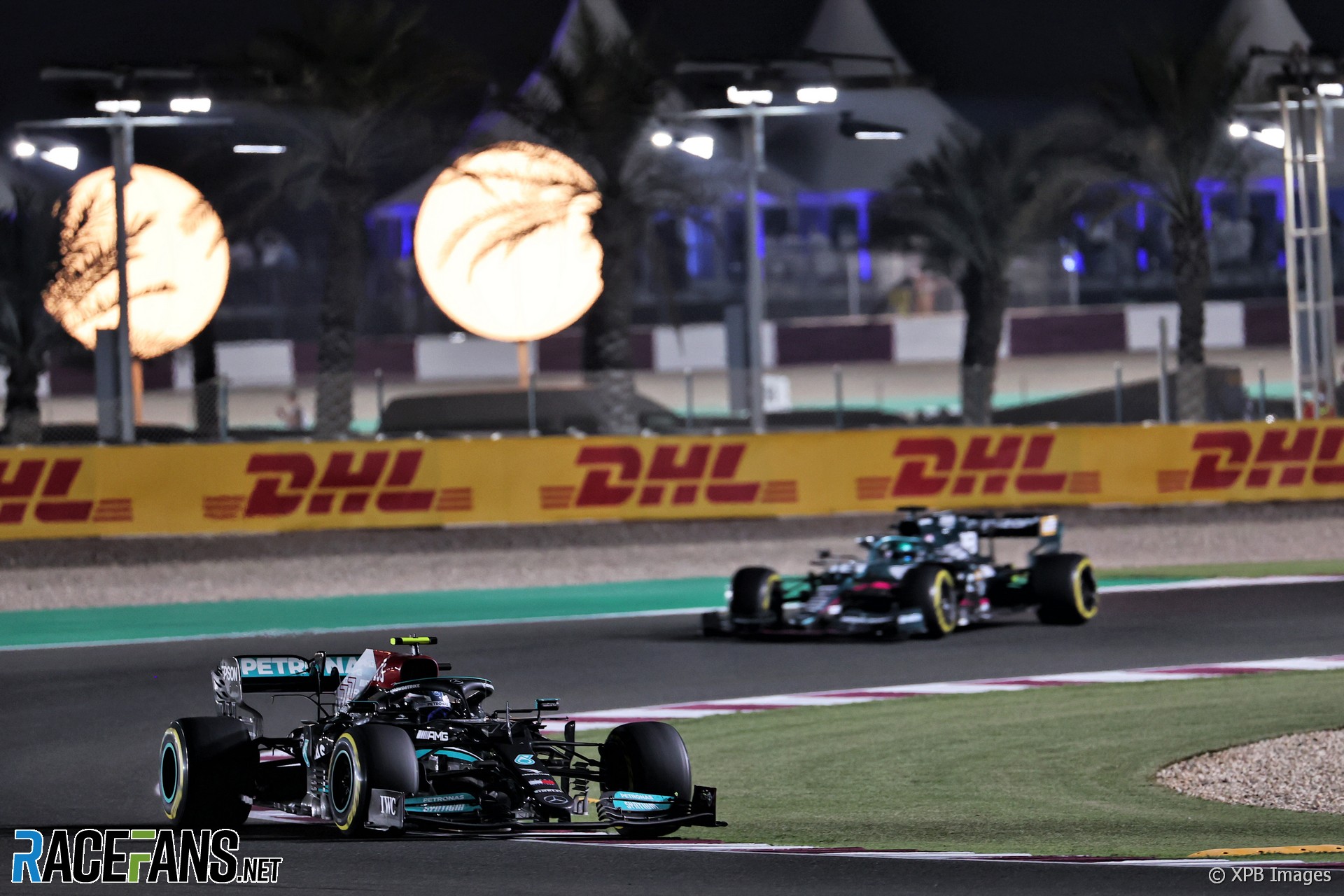 Mercedes retired Valtteri Bottas from the Qatar Grand Prix due to the extent of damage his car suffered after he picked up a puncture.

Bottas’ front-left tyre failed on lap 33 of Sunday’s race. The puncture occured at the beginning of the lap, forcing him to cover over five kilometres on three wheels, his car dragging along the floor. That caused considerable damage to the W12.

After his tyres were replaced Bottas continued for 15 laps before retiring from 12th place.

“There was no downforce any more and we retired it,” team principal Toto Wolff explained. “The car was running hot, the car was damaged and wasn’t fast enough anymore, so we decided to preserve the power unit.”

Although Bottas looked unlikely to reach the top 10, he could theoretically have aided the team by fitting fresh tyres at the end of the race in a bid to set the fastest lap. While finishing outside the top 10 would have denied him the bonus point, it also would have prevented Max Verstappen from claiming it.

However his lap times before retiring were almost three seconds slower than Lewis Hamilton’s. As Verstappen was able to lap 1.8 seconds quicker than Hamilton after he fitted fresh rubber, the damage to Bottas’ car was clearly too great for him to beat the Red Bull driver to the fastest lap.

“We couldn’t really see that we were going to get into the points with him,” Mercedes trackside engineering director Andrew Shovlin explained. “There was quite a lot of aero damage.

“We were starting to get another vibration on that set of tyres, whether it was that or not we’ll need to let Pirelli have a look at them. But ultimately, we decided that scoring anything was becoming such a long shot that it just made sense to bring the car back in.”

It was an unfortunate end to a weekend which had started “brilliantly” for Bottas, said Shovlin.

“On Friday he had an absolutely faultless day, he was extremely quick, single lap and long run. He did some great work on the set-up, got the car in a good place, and that was the direction that ultimately Lewis moved in.

“But then from Saturday onwards, for Valtteri, it all just seemed to become a bit more difficult. In qualifying, probably our biggest issue was just getting the car in clear air. We had a really unfortunate session where whenever we left, people were out in front of us, he couldn’t get the temperature in the tyres.

“Then in the race, the start was difficult for him. It was a tricky opening few corners. He recovered brilliantly from that and we thought we were still going to pull out a really good team result from the race today and the puncture took it all away.”