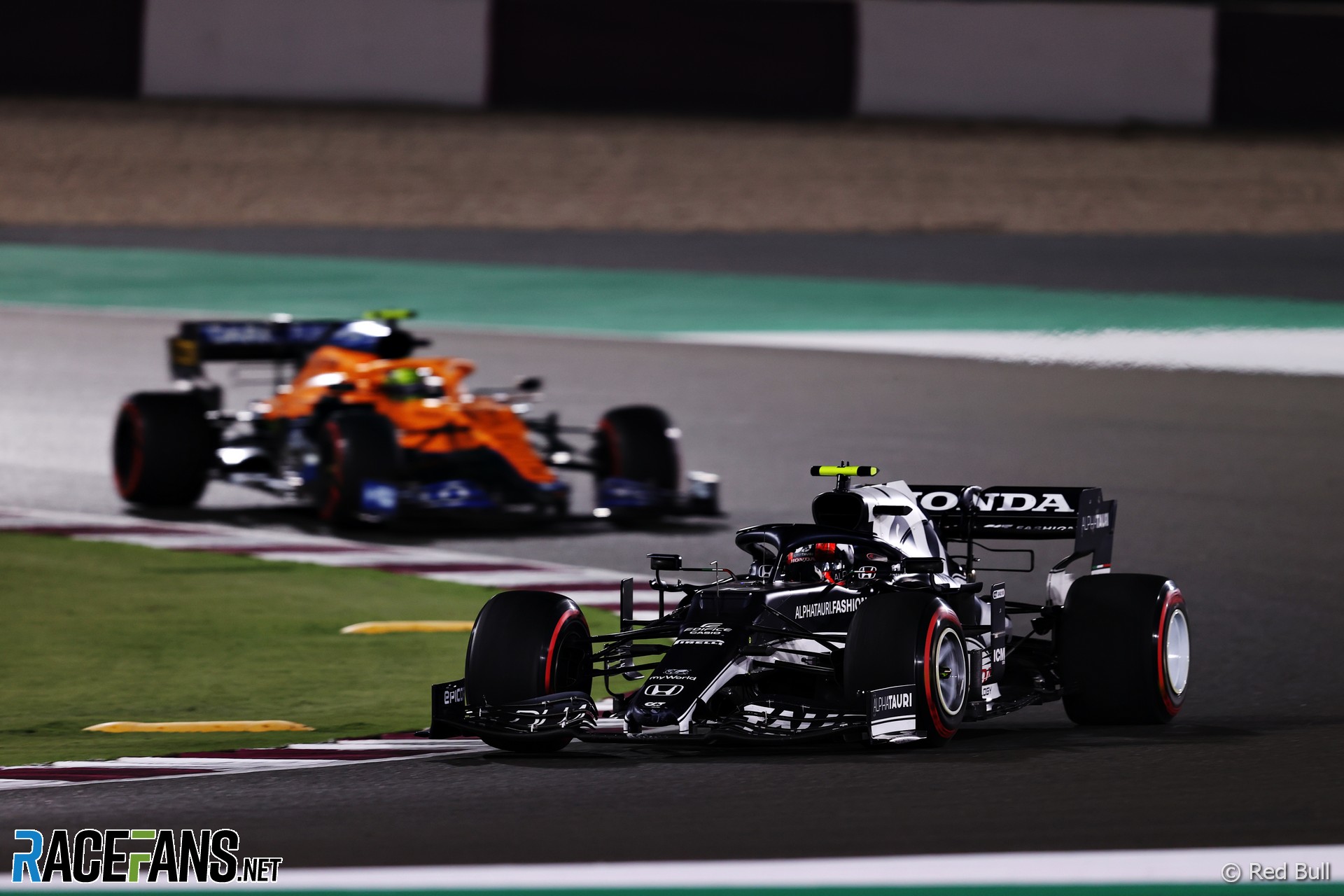 Pierre Gasly was mystified by his loss of pace in the Qatar Grand Prix as he failed to score after starting on the front row of the grid.

AlphaTauri had both cars in points positions early in the race but failed to add to their championship tally. Gasly lost second place to out to Fernando Alonso at the second corner and fell down the order steadily across the 57 laps.

“Our pace was shocking, basically,” said Gasly after finished 11th. “At the moment we don’t really have the answer.

“We tried to stick with Fernando for the first few laps, I could barely make it. And then after that, we tried to go for an aggressive two-stop strategy but the pace was never there. It was shocking.”

Gasly believes the car’s performance rather than the team’s strategy was to blame. “I tried to push as hard as I could in the car and even with fresher tyres than Fernando I was miles away when he was on used tyres. It was so frustrating.”

“I don’t understand how we can be that slow during the race,” Gasly continued. “We need to review everything. We changed the front wing and floor after yesterday’s incident in quali, I don’t know if it had an impact.

“We used the medium tyres in quali that we used again in the race, so they were not brand new. I don’t know if that an impact but we need to review everything because even pushing really hard on the tyre the lap times were never there today.”

AlphaTauri’s one-lap pace in qualifying flattered them, Gasly believes. “When we pushed we overheated the front really quickly and put so much energy in the tyre we were sliding. So apparently over one lap we can take it but the whole race distance was difficult.

“Even on brand new tyres, on the first lap when we’re pushing flat-out, still even my lap times were not that great, so. Today was anything. We could have done five stops – three, two, one, it doesn’t matter, honestly. It was a question of pace.”

Rivals Alpine claimed a podium finish and bumper haul of 25 points, drawing well clear in their contest for fifth in the championship.

“Alpine surprised us in more than than one way this weekend,” Gasly admitted. “Already the qualifying pace was was impressive, their race pace was really impressive. But I think today was the most impressive performance they have done.

“To go from Brazil, where they were, to here Fernando is on the podium, is just unbelievable. So I don’t know what they’ve found. But this is massive, they were in front of McLaren, in front of Ferrari and it didn’t happen many times this year for them.”

AlphaTauri would “need a couple of miracles in the last few weekends,” Gasly said, in order to make any fight back for fifth place in the constructors’ title. “Obviously we can’t do [that] every weekend, but definitely today I don’t understand [how] both cars can qualify like that, in the top 10 and having good pace and both go backwards during the entire race and just not show any signs of speed.”

Gasly admitted it was “very frustrating, when we see where the Alpines finished.

“But at the end of the day, we just need to be objective with ourselves. And they did a much better job than we did and we can just congratulate them.”