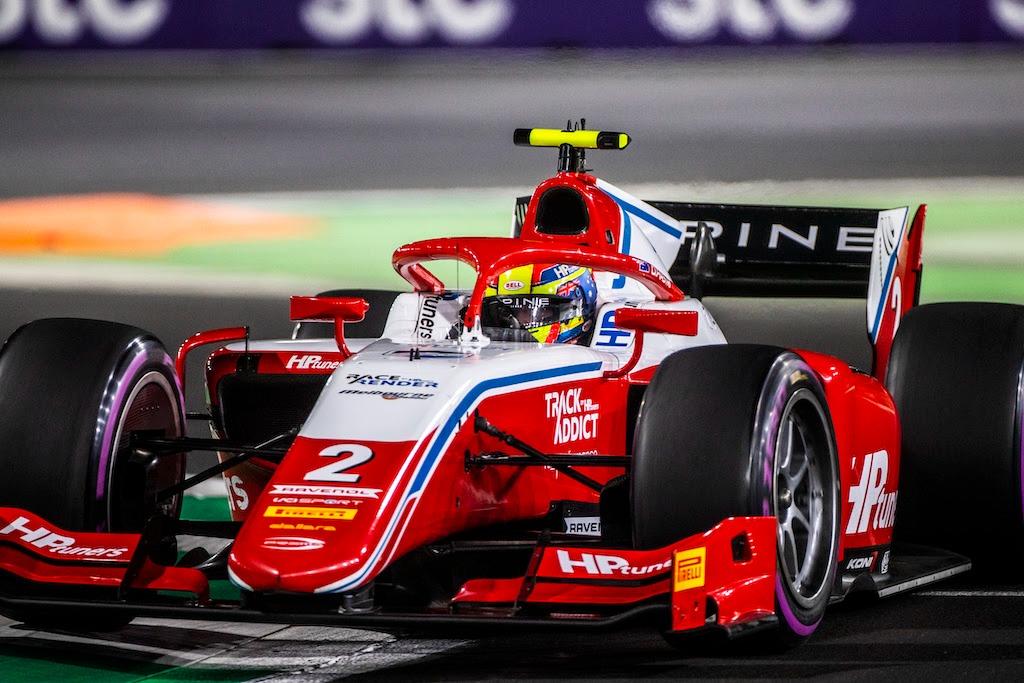 Alpine junior Oscar Piastri has continued his charge towards the Formula 2 title with victory in the second sprint race on the Jeddah Corniche Circuit.

Piastri started from third behind Red Bull junior Jehan Daruvala and Bent Viscaal, but after Daruvala pushed Viscaal wide at the exit of turn two on lap one it became a battle between the two drivers affiliated to Formula 1 teams for victory.

Their duel didn’t properly begin through until lap five of 20, as the race was put behind the safety car on the opening lap due to two incidents on the run to turn one. Ralph Boschung cut across Guilherme Samaia and sent him and Alessio Deledda into the barriers on the outside, while Clement Novalak drove into the inside wall before the debutant’s car careened into Marcus Armstrong who had won the first race of the day.

Daruvala built a lead of a second after the restart but kept bringing Piastri back into play by repeatedly locking up into turn one. The lead was then virtually handed to Piastri anyway on lap 12, as Daruvala was given a five-second penalty for cutting across turn one a few laps earlier and keeping himself ahead of Piastri rather than giving up the position.

Piastri then tried going for the lead on-track anyway, attempting a brave move at the high-speed turn 20 before going down the inside of the final corner on lap 14. The DRS was available to Daruvala though down the pit straight and he went straight back past, and it took a few more laps before Piastri tried a move again. On lap 17 he tried the inside line for turn one and managed to make the corner as he forced Daruvala to give him space on the entry.

Daruvala dropped over a second-and-a-half in the space of a lap, and did not get the chance to reclaim it as the race was put behind the safety car again when Hitech’s Liam Lawson spun into the barriers exiting turn 13.

The slowing of the pace severely hurt Daruvala and Alpine junior Christian Lundgaard, who had passed Viscaal for third but had also received a five-second penalty for cutting across to turn two when he made his move, and their pair were dropped down to 14th and 15th in the final classification.

Viscaal therefore inherited second, ahead of Piastri’s team mate Robert Shwartzman, Dan Ticktum and Jack Doohan taking fifth in just his second race in the category. Shwartzman is now 47 points behind Piastri in their battle for the title, with 92 still available to score.

Sauber junior Theo Pourchaire finished an remarkable sixth place, making up 13 positions from his starting spot and passing Enzo Fittipaldi late on. Following Pourchaire’s progress up the order, but not quite as impressively, was future Alfa Romeo F1 driver Guanyu Zhou who went from 17th to eighth to score the final point of the day.