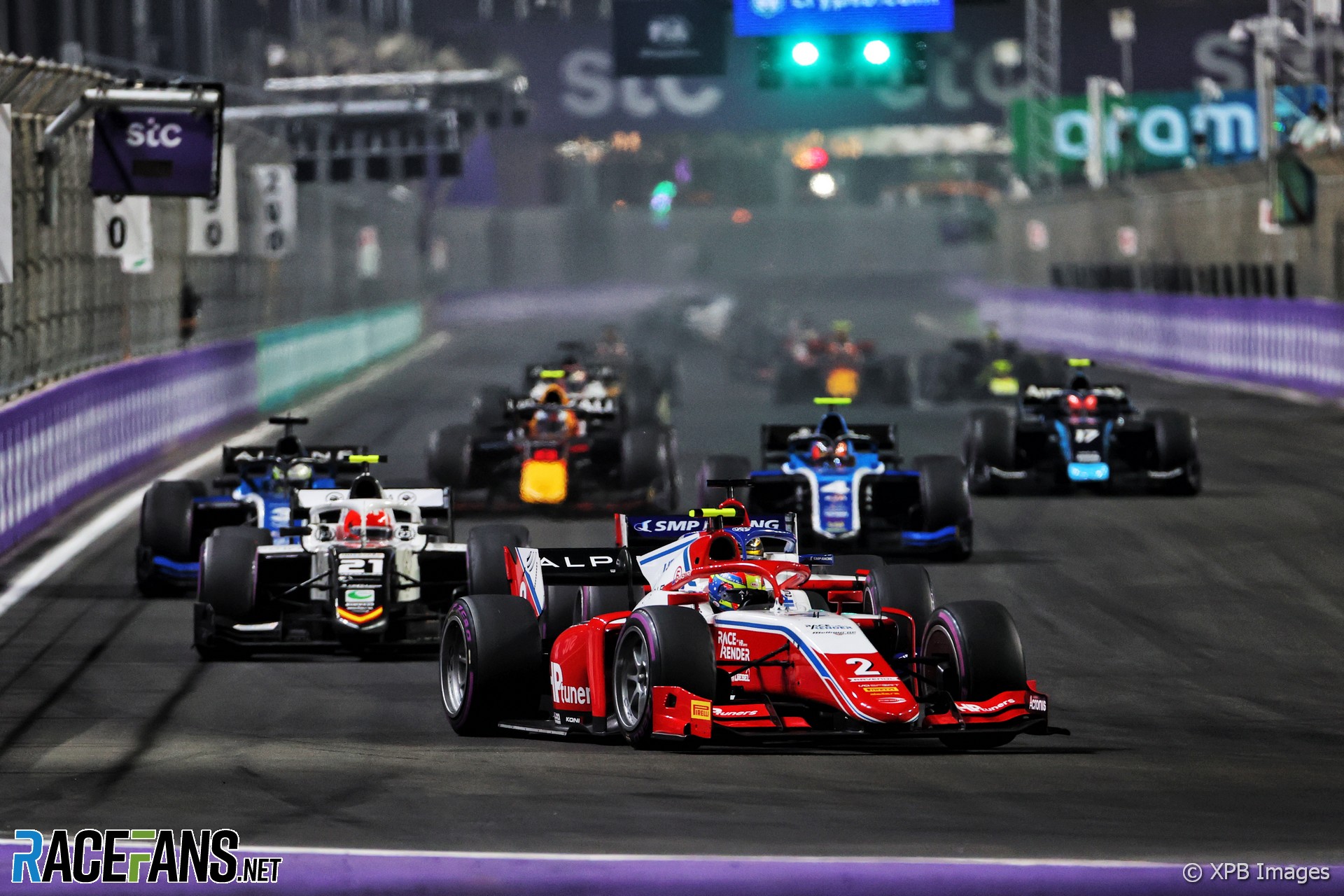 F2’s Sunday afternoon feature race was originally scheduelled to take place at dusk, but barrier repairs at turn 14 prior to the start spilled over to the scheduled grid formation time. By the time race director Michael Masi had approved of the repairs, the race should have already been well underway.

As vehicles and marshals remained on the track repairing the barriers, the F2 field had to be summoned from their support paddock and drive the wrong way around the track until they could get around to the pit entrance and then turn around to enter the pits.

Several drivers changed their choice of tyres once there, before a reconnaissance lap was provided, followed by a further lap to make it to the grid to form up for the race. The 28-lap race only lasted three corners before red flags were waved though, as ART’s Theo Pourchaire stalled from third on the grid and was rear-ended by Charouz’s Enzo Fittipaldi. Debris flew over the pit wall while Pourchaire’s car lurched forward as it was struck at speed.

At turn two, Trident’s Marino Sato rode over the kerbs and into Carlin’s Dan Ticktum, which then pushed him into Hitech’s Liam Lawson, causing the latter to spin. Everyone was able to avoid his rearwards-facing car, but by that point the race was already suspended.

Pourchaire and Fittipaldi received treatment in their cars as priority during the lengthy red flag period that followed, and once they were safely taken away from the scene, work got underway on clearing fluid from and then sweeping the area of their collision.

Race control decided the cars would not return to grid order, with MP’s Clement Novalak rejoining the action from the back after a formation lap stall meant he missed the grid formation, and the restarted race would last for 20 minutes plus one lap with a rolling start.

The compulsory pit stop that all feature races include would remain in the shortened event, with the window to pit opening at the end of lap four. Piastri led from pole all the way to that pit window, with Prema team mate Robert Shwartzman only briefly challenging him into turn one on the restart.

The result was taken back two laps to the end of lap four – just as Piastri entered the pits, meaning the championship leader had taken a second win in a row ahead of Shwartzman.

Campos’s Ralph Boschung claimed his first F2 podium in third place, a position earned after he ran Virtuosi’s Guanyu Zhou off-track at turn one on the last counted lap. Stewards noted the incident, but chose not to penalise.

Zhou’s team mate Felipe Drugovich was fifth, ahead of Hitech’s Juri Vips and the ambitious Christian Lundgaard who with his ART team had opted to switch to the supersoft tyre rather than start on it. Marcus Armstrong picked up eighth, although the DAMS driver had actually dropped out of the top 10 prior to the red flag. His restoration into the points came at the annoyance of Liam Lawson and Dan Ticktum, who were classified ninth and tenth but had actually lost time in the pit stops due to teams double-stacking.