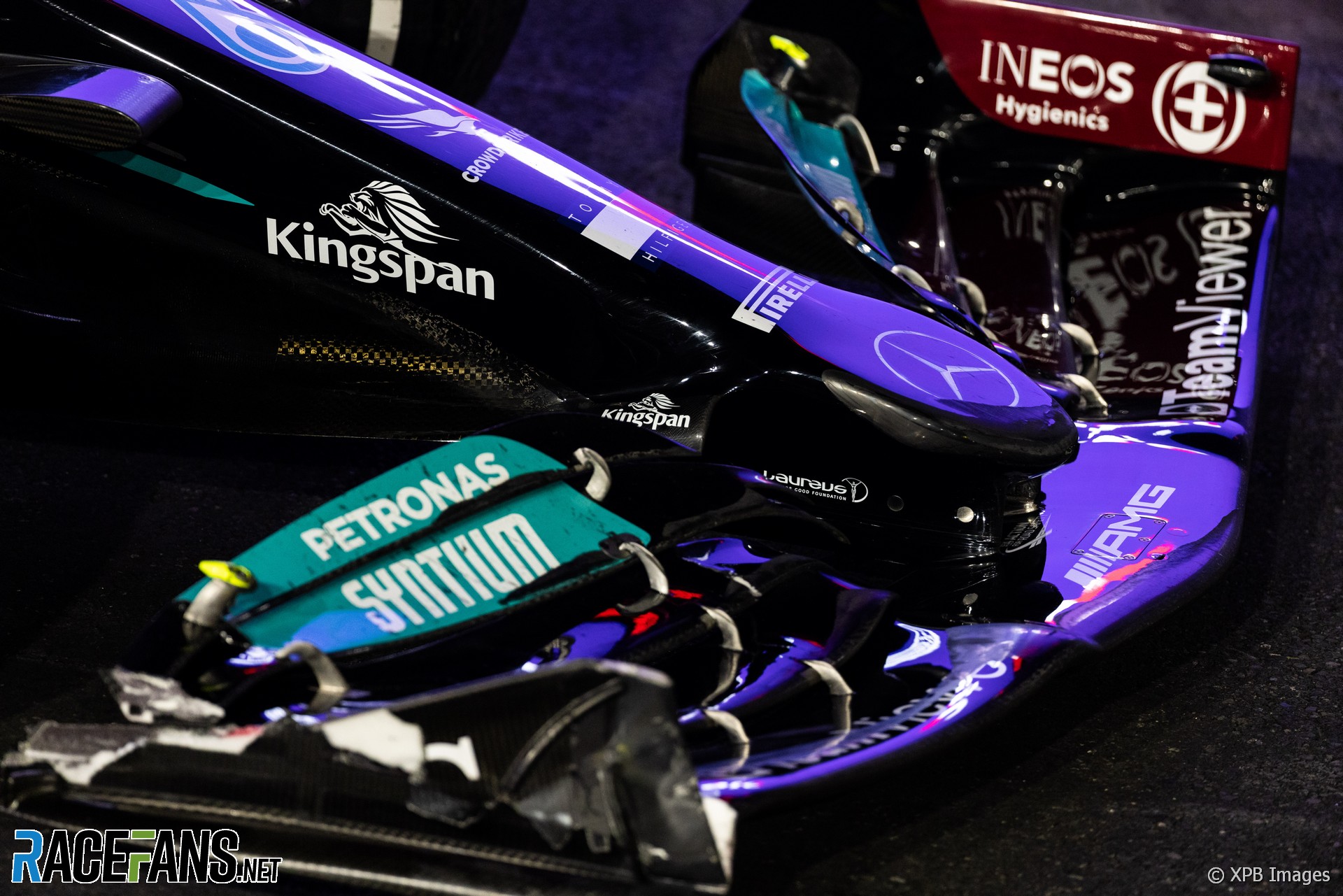 The team’s trackside engineering director Andrew Shovlin said the damage from his tangles with Max Verstappen and Esteban Ocon were costing Hamilton up to four tenths of a second by the end of the race.

Verstappen was involved in both incidents in which the right-hand side of Hamilton’s wing was damaged. The Red Bull driver passed the Mercedes at turn one during the race’s second restart on lap 17. Hamilton was sandwiched between his title rival and Ocon, and his front-right hit Ocon while the front-left tapped Verstappen’s rear-right tyre.

Shovlin described Mercedes’ relief of emerging from the first incident. “Losing the position wasn’t that big a setback for us,” he said. “The relief was more than we managed to get through that three-abreast moment where Lewis got sandwiched without losing the wing completely or suffering some serious car damage.

“More of the focus was on making sure that everything was okay. And we still hadn’t had a significant loss of performance at that stage.”

However Hamilton suffered a further loss in performance when the wing took another hit on lap 37. This occured when Verstappen braked early for the final corner and Hamilton lost his right-hand front wing endplate as he hit his rival’s rear.

The lap time loss was more noticeable from that point on, said Shovlin. “It was going up and up. We started off with probably only about a tenth or two after he got sandwiched and Esteban rode over it. We were quite lucky that it sort of seemed to hit the road, we lost a few bits but it bounced back, no more damage.

“After Max we then lost the whole side of it, so you’re getting up to nearer four tenths of performance.”

Having come close to losing pole position for Verstappen in qualifying, Mercedes enjoyed stronger pace in the race. Verstappen used the medium compound tyre for the final stint with Hamilton on the more durable hard rubber.

“The other thing we’d seen that gave us a lot of optimism was the speed that Lewis had,” Shovlin said of Hamilton’s pursuit of Verstappen on the harder rubber.

“His best lap, and he was just warming up, was still half second quicker than Max’s in the first stint, and that was telling us that we can actually win this on track.”

That became more difficult when Hamilton and Verstappen came to blows as they tried trading positions, with the latter having been instructed to hand the lead over to Hamilton to avoid a penalty for an illegal overtake at turn one where they hadn’t touched.

A few laps after the front wing-breaking collision, the durability of Verstappen’s medium tyres meant he had to start managing them and so Hamilton was able to get back past. Once ahead the Mercedes driver upped his pace to take the extra point for fastest lap, going three quarters of a second faster than Verstappen’s earlier benchmark once he was on a low fuel load late on.

Shovlin said the pursuit of fastest lap came from a “very determined” Hamilton, with Mercedes unsure on the risk of pushing to the limit.

“At the time we were very much in two minds,” he said. “We were seeing other people struggling with the tyres. We could see that the wing was most definitely not guaranteed to stay on the car after the afternoon or evening that it had.

“And it’s a difficult decision between do you go for the point, and Lewis knew fine well it would put him level [at the top of the standings], or do you play it safe? Ultimately Lewis was the one who took the decision, and that decision was probably aided by the fact he can’t actually see the front wing, because if he was watching the TV like we were, he may have thought better of it.”