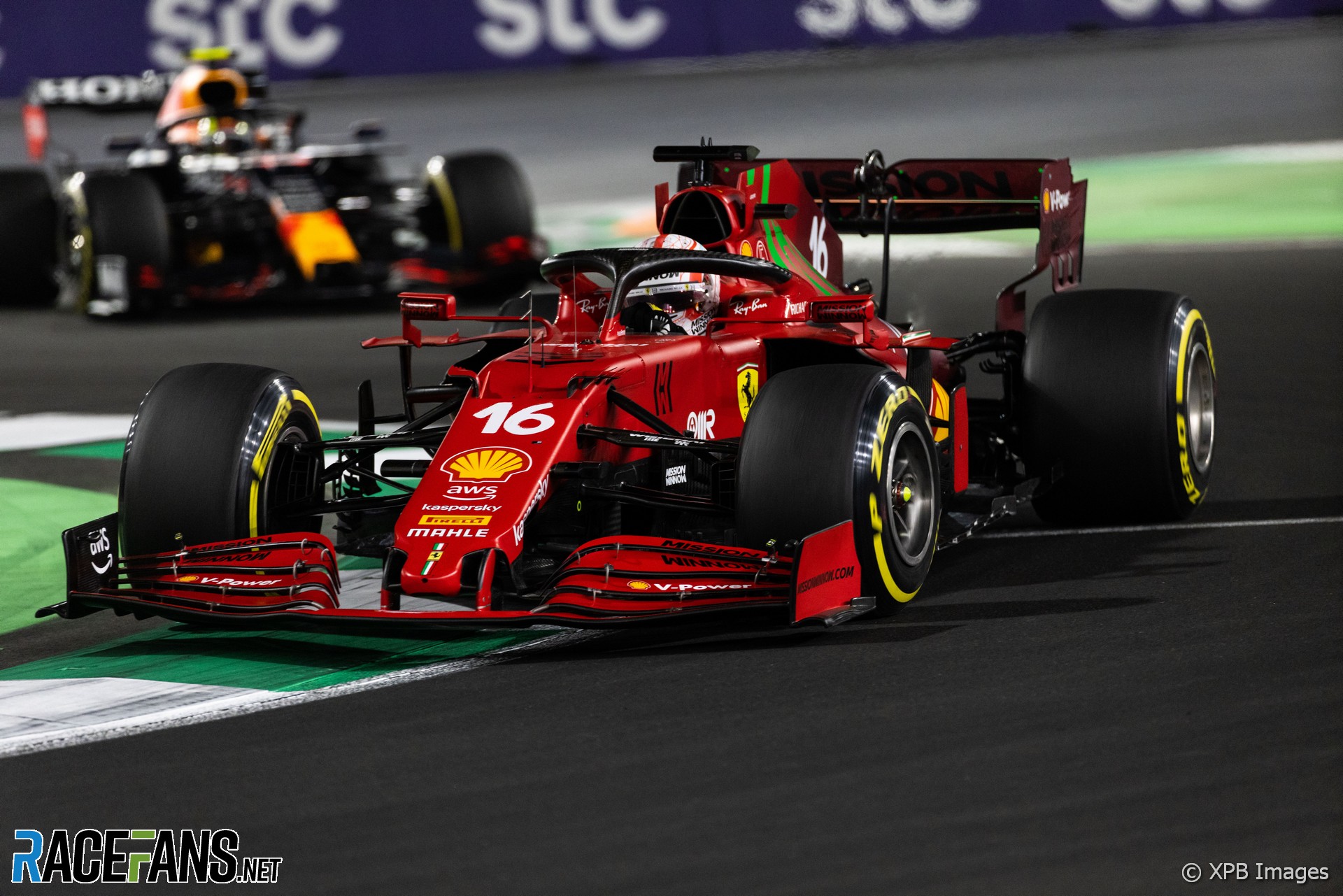 Leclerc: left feeling “very dizzy in the car” by laps behind VSC

Leclerc, who finished seventh, said the main challenge in Jeddah was “just staying on track” especially through the many Virtual Safety Car periods. “After the VSCs, with those hard tyres, it was very difficult for me. I really, really struggled,” he said.

At one stager the VSC was deployed continuously for four laps, considerably longer than a typical period. “The VSC of – I don’t know how many laps, for the debris – oh my god, this was horrible,” Leclerc described.

As drivers only receive short notice before a VSC period ends, they have to keep their tyres up to the ideal temperature throughout. “As a driver just to turn left, right, left, right, left, right for 10 minutes, I was feeling honestly very dizzy in the car,” said Leclerc. “To have this happen is not great but the pace was good.”

Pierre Gasly admitted he was concerned how little green-flag running there might be after two red flags in the first 16 laps were followed by a spate of further interruptions.

“At some point I started to think ‘Okay, we’re going to do like half of the race under VSC or full safety car if it keeps going like this’,” he said.

Gasly called the race a “pretty difficult one” given the frequent VSC periods and other disruptions, often due to debris. “I think in the end, they kept us all safe, which was not an easy one because we’ve seen what’s happened in Formula 2 and was pretty tricky but yeah overall, I don’t think I’ve ever had such a race.”

Prema have won the F2 teams’ title for the second year running, having also won last year when Mick Schumacher took the drivers’ championship. Prema’s points tally, 375.5, leaves them 140 clear of closest rivals Carlin on 235.5 points, with one round to go.

The drivers’ title can now only be won by one of their racers, Oscar Piastri and Robert Shwartzman. Guanyu Zhou and others dropped out of contention over the Jeddah race weekend.

Ahead of his last race in attendance as FIA President, @JeanTodt was joined on the grid by all 20 drivers and F1 CEO Stefano Domenicali as a mark of respect

From all of us at F1, thank you Jean for your tireless work and invaluable contribution to this sport we all love pic.twitter.com/RMmrevWaGS

Just wanted to tell you that I’m globally fine ! For the moment I don’t know if it’s already the end of the season for me. But the most important is not that, that was a really big one and Enzo is injured.

I wish him the best recovery possible !

"Yet what a way to run a sport; by committee. After 16 laps and two red flags, Verstappen was either in the wrong or not and, if he was, surely that’s for the race director or stewards to decide the punishment, not a basis for consultation with Verstappen’s team?"

"Andy Chang wrapped up the Chinese Formula 4 title with his first win of the year on Saturday of the season finale at Ningbo. The Macanese driver, who took podiums in British Formula 3 back in 2014 and was title runner-up in Chinese F4 last year, started the weekend being pipped to race one pole by series returnee Oscar Gao."

There’s been plenty of controversy over time penalties issued, this year and whether they sufficiently punish a frontrunning driver. From Lewis Hamilton’s Silverstone penalty that saw him go on to win the race, despite being found at fault for his crash with Verstappen to the Red Bull driver’s own post-race penalty in Jeddah, which saw no change to the results, Steven Robertson asks if there could be a fairer way to ensure penalties have the same effect on all drivers.

Time penalties don’t mean much when the front runners are so far ahead, Verstappen ended up with 15 seconds of penalties and still finished second.

If Bottas got 15 seconds of penalties he’d have dropped from third to seventh. What sort of penalty system is this? Dropping positions instead would be more of a deterrent.
@Emu55