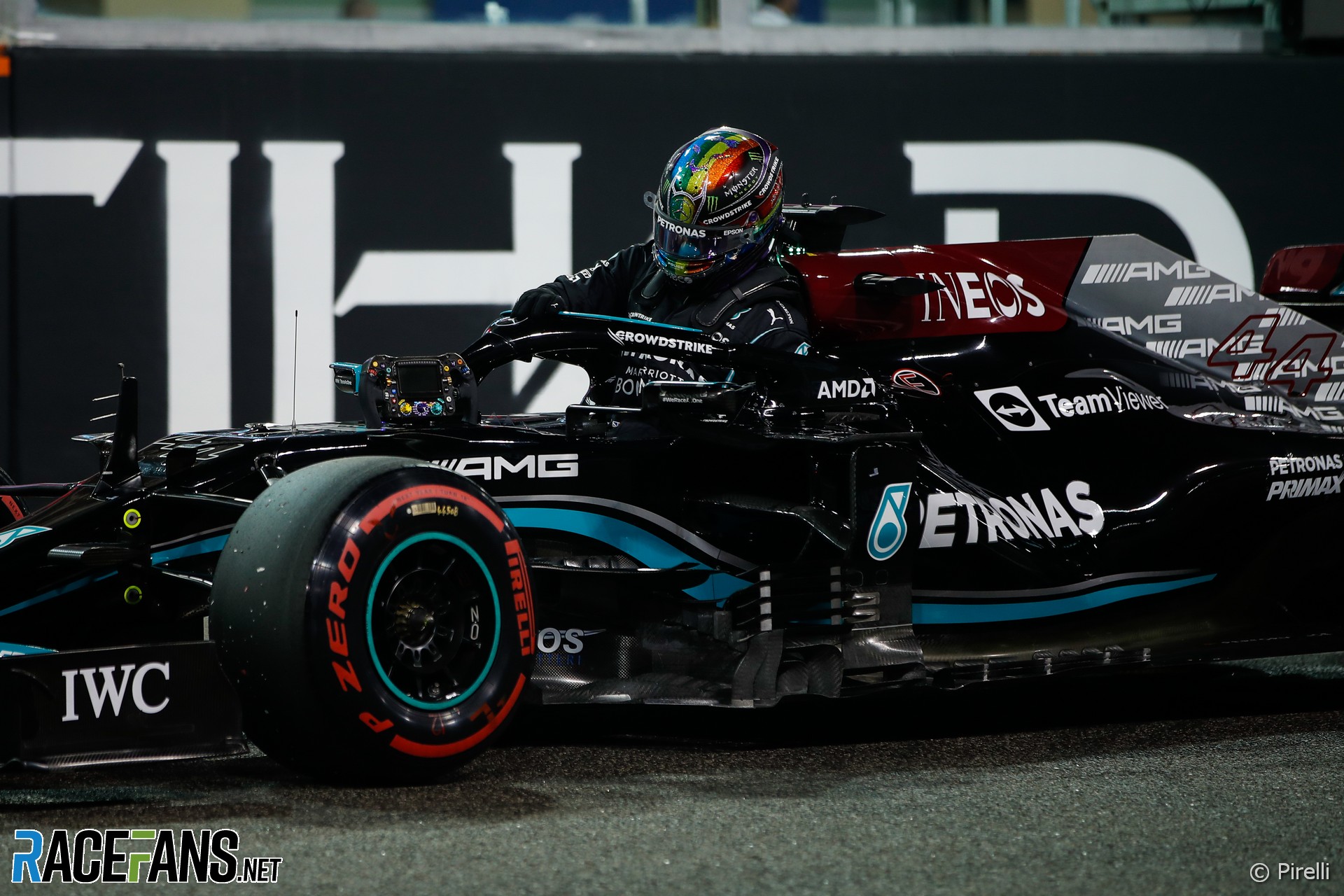 His hope is that starting on the medium tyre compound will give him a strategic advantage over his soft-shod rival. And, importantly, it lessens the pressure on Hamilton to get ahead of his rival at the start.

Hamilton smelled a ruse in the mid-qualifying lock-up which led Verstappen to swap his mediums for softs in Q2, meaning he would start on them. “I’m always kind of sceptical with everything, so it’ll be interesting when we go back and look at the information and onboard laps,” he said.

Sitting next to Verstappen, Hamilton observed: “It’s very rare that people lock up in turn one.” He suspects Red Bull always intended to start the race on softs. “I think we’ve got the right tyre but I guess we’ll see tomorrow.”

Pirelli brought the three softest compounds in their range, the C3, C4 and C5, to the revised Yas Marina circuit. Behind pole-winner Verstappen on softs and the medium-shod Mercedes, third-placed Lando Norris is also on soft tyres. He’s also on the racing line, and Hamilton will be anxious to ensure the McLaren doesn’t sweep by and separate him from his target.

The other soft-shod Red Bull of Sergio Perez in his wheel-tracks will be another concern. Failing to pass the Red Bull ahead of him at the start may prove an inconvenience; falling behind the other could be disastrous.

The changes to the Yas Marina layout potentially allow a driver with a starting advantage to carry it further into the lap. Where drivers previously funnelled into a single file parade, the new and more flowing early sequence should allow them to stay alongside further. The opening laps of the Formula 2 races were alive with three- and even four-wide action.

Although the considerably faster F1 cars can’t pull off manoeuvres like that with such ease, two cars could easily follow each other for the entire first sector, especially with the possibility of slip-streaming down the back straight.

Much has been made of the possibility of a collision between the two contenders, particularly after FIA F1 race director Michael Masi reminded everyone watching that points deductions are an option for the stewards if they suspect someone has done the dirty. Given that, and what’s at stake, it would be unwise for either driver to risk a retirement.

If Verstappen can feel confident about keeping Hamilton behind at the start, Mercedes will expect their choice of strategy to bring them into contention later in the race.

How far will Verstappen be able to get on his softs? Few drivers have explored their limits, except Esteban Ocon. In second practice he took a set of soft tyres on a 16-lap stint that saw the Alpine lap fairly consistently, though at somewhat pedestrian 1’30 lap times.

There was no significant drop-off in Ocon’s times over the stint, his final lap being one of the faster ones but without knowing how heavily fuelled the car was it’s hard to say whether that could correlate to race pace. Verstappen did an eight-lap soft tyre stint where he lapped considerably quicker (times much closer to 1’28) but of course, over a shorter distance and with potentially lower fuel.

But Ocon’s stint shows the softest tyres in Pirelli’s range may not necessarily be as great a disadvantage over a race stint as they have been at other tracks. The cooling surface over the dusk sessions in Abu Dhabi may also help.

How hard Verstappen has to push his tyres may prove critical. If it’s Hamilton filling his mirrors he may be unable to relax. If it’s Norris or – best-case scenario – Perez, he can coax that soft rubber.

He may have to exercise particular restraint at the exit of turns five and nine – the two quick left-handers, where heft kerbs lie in wait. These have been only partially eased in response to the concerns raised by Pirelli over the ‘pyramid’ kerbs which are similar to those which led multiple drivers to suffer punctures at Losail.

Verstappen on soft rubber being chased down by Hamilton on harder tyres was the scenario we saw in their nail-biting battle at Jeddah. Hamilton prevailed in that fraught contest having repeatedly used his straight-line speed to pressure Verstappen.

But he doesn’t have the same edge this weekend, as the speed trap below shows, Verstappen having opted for a lower downforce configuration. That change wasn’t made without problems for Red Bull, however. Ahead of final practice and qualifying, Verstappen’s rear wing had to be adjusted and repaired.

Nonetheless Hamilton goes into a race where he must out-score Verstappen confident that he’s on the right tyres and the right strategy. The final chapter of this thrilling season will reveal whether he was correct, or of Red Bull have pulled off a championship-clinching masterstroke.

Who will win the 2021 drivers’ championship? Share your views on the Abu Dhabi Grand Prix in the comments.