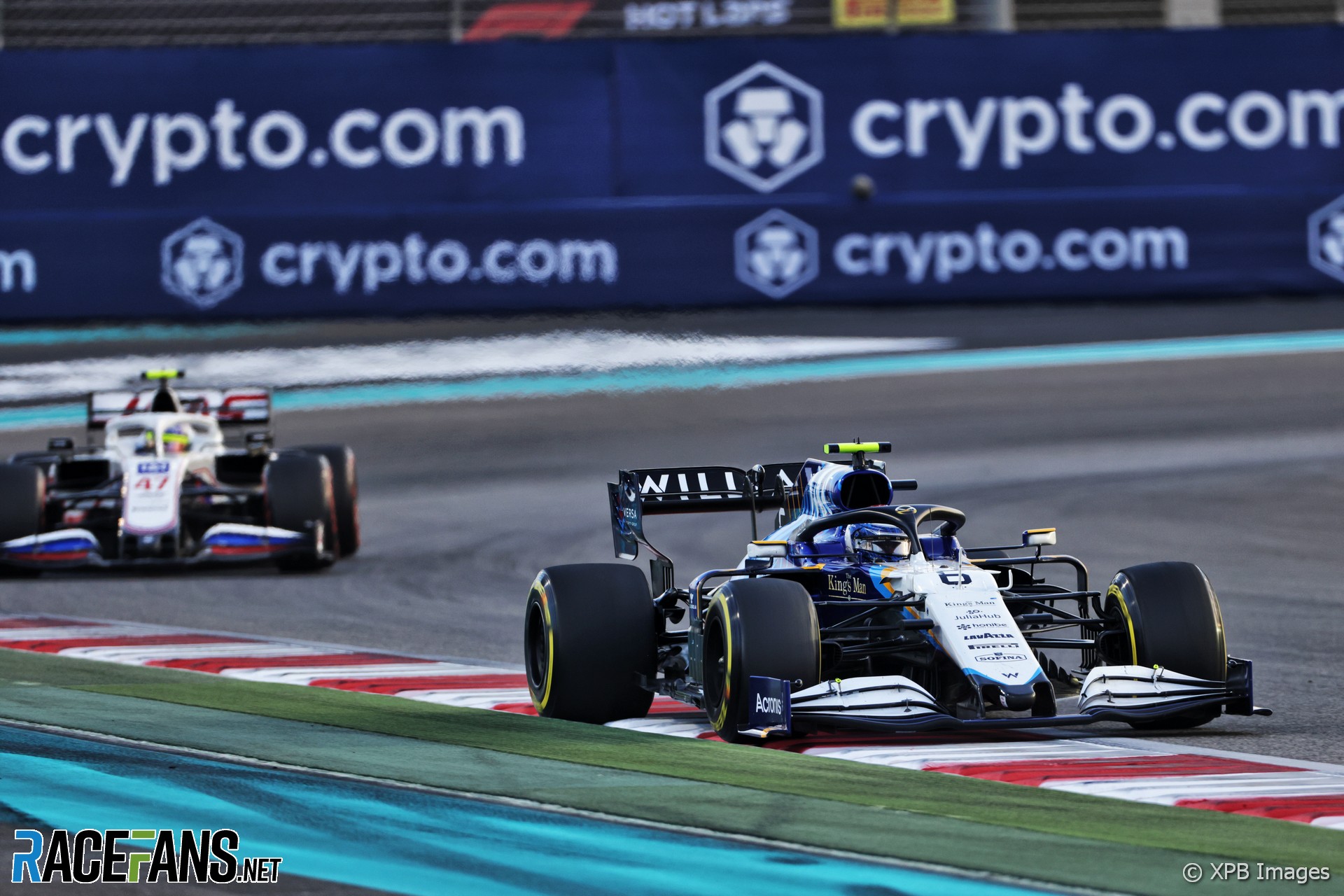 In the round-up: Nicholas Latifi says his turn 14 crash, which triggered a controversial conclusion to the 2021 Abu Dhabi Grand Prix, was caused by dirt on his tyres.

Latifi crash was consequence of battle with Schumacher

Latifi caused a late-race Safety Car which ultimately affected the outcome of the Abu Dhabi Grand Prix and 2021 world drivers’ championship when he crashed his Williams into barriers at turn 14. The race was restarted with a single lap to go, after which Max Verstappen passed Lewis Hamilton to win the race, and championship.

“It was a tough race out there today and we were struggling for pace throughout,” Latifi explained. “Towards the end of the grand prix I was racing with Mick Schumacher and was forced slightly wide, but fairly, at turn nine.

“My tyres got dirty from running off track and I subsequently made a small mistake and unfortunately crashed. This obviously wasn’t how I wanted to end our season, so it’s disappointing.”

Fittipaldi to stand in for Mazepin at Abu Dhabi test

After Nikita Mazepin tested positive for Covid-19 before the Abu Dhabi Grand Prix, Haas have announced reserve driver Pietro Fittipaldi will run in his place during the post-season tyre test this Wednesday.

Fittipaldi drove two races for Haas at the end of last season, in place of the injured Romain Grosjean, including the 2020 race at Yas Marina.

Lewis Hamilton’s brother, British Touring Cars racer Nic Hamilton, savaged the FIA’s handling of the the Abu Dhabi Grand Prix in a social media post after the race. “The FIA broke their own rules, which is a disgrace to our whole sport,” he said.

“Nevertheless, regardless of being mistreated today, the Hamiltons were humble in defeat.”

He pointed out his brother and father congratulated Verstappen and his father in their moment of triumph. “People can say what they like, but my father’s gesture proves all of the doubters and haters wrong and shows who we are as ‘The Hamiltons’. Proving people wrong is in our DNA, which Lewis does on a daily basis, with utter professionalism and decency in defeat, even though we all know, that he was let down by the sport that he has given so much to.”

“Congratulations to Max for such a fantastic season from him,” he added.

Antonio Giovinazzi, who drove his final F1 race for Alfa Romeo yesterday, said “it’s a pity to end the season like this” following his first retirement of the season.

“We were having a good race, fighting a world champion like Vettel, but at least I could enjoy watching the final laps of this race. It’s been a great battle between Max and Lewis, both would have deserved the title.”

“It’s been an emotional day overall, seeing Kimi [Raikkonen] retire and seeing all the things the team did for us today,” Giovinazzi continued. “He’s a great person, very fair and all of F1 will miss him.

Giovinazzi will drive for Dragon-Penske in Formula E next year. “I hope this is just a ‘see you soon’,” he said. “My full focus is now on Formula E, but I hope to be back next year. I’m happy with my journey, the way I progressed over the years, I gave everything I could.”

After I was wrongly accused of announcing Felipe Massa as champion in 2008, I’ve had a complex about last-lap title deciders.

A confusing reading of the rulebook doesn’t do it for me.

But Max – and Lewis – you definitely did fight for it

Pretty clear that a curiously selective application of the safety car rules in Abu Dhabi created the opportunity for a Netflix-pleasing final lap of head-to-head racing by the two championship contenders. If you were @MercedesAMGF1, you'd appeal too.

It's a shame Verstappen and Horner actually came out praising Mercedes and Hamilton!! Next thing they know .. boom… protest! Have mercy over those fans who've witnessed this. These off-track dealings have made a mockery of the sport! #F1

The broadcasting of those FIA/team radio messages are fascinating. A few years ago we wouldn't have known how that played out behind the scenes.. They've made Masi look so out of his depth IMO for a few races now

"Red Bull and Honda junior Ayumu Iwasa will join DAMS for post-season Formula 2 testing at Yas Marina Circuit next week alongside the team’s current driver Roy Nissany. Iwasa came 12th in the FIA Formula 3 Championship this year with Hitech GP, and since that concluded in September he has been repeatedly rumoured to be making the step up to F2 for 2022."

Usually, I hate sports – but becoming a Formula One fan has changed my life (Metro)

"I got angry at football on TV, asking why it was all men, all of the time. Formula One, if anything, felt worse. Until recently, Pit Girls strode around the circuits wearing very little and posing; it’s an incredibly macho sport."

After Mercedes committed to appealing the Abu Dhabi Grand Prix’s result, Dr Mouse says it’s not the team’s actions that are driving the controversy.

To me, it isn’t the appeal which leaves a short taste, but the way the season ended. It was a farce.

Any team in this situation would appeal. The FIA broke their own rules, and in doing so decided the championship. Mercedes will lose millions from this, with sponsors often paying bonuses for winning races and the championship. If the situation was reversed, Horner would certainly be appealing it, as would any team principal.

I have no doubt the result will not be changed, but I still support this appeal and any further legal action Mercedes take. We need to shine a spotlight on this. We can’t have the officials breaking the regulations like this. If Mercedes just drop it, nothing will change.
@drmouse