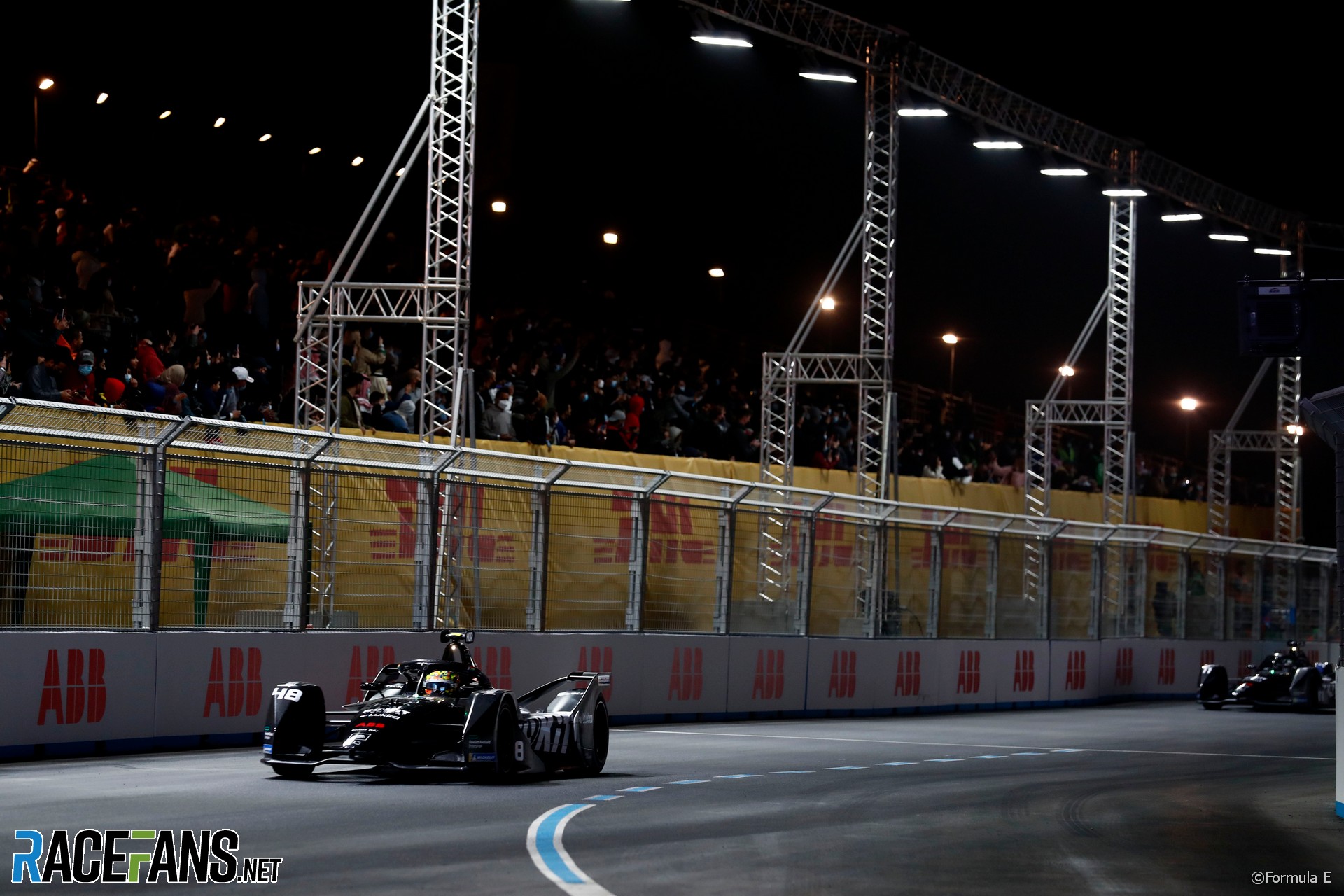 Edoardo Mortara took victory in the second Diriyah E-Prix after overtaking Venturi team mate Lucas di Grassi with the use of attack mode.

The race ended under Safety Car after a late spin for Alexander Sims left his Mahindra in the wall and needing to be recovered. Robin Frijns finished second for Envision behind Mortara, while Di Grassi finished third to make it a double podium for Venturi.

At the start, De Vries leapt out in front as Mortara and Frijns fell into order behind. Lucas di Grassi and Andre Lotterer held onto fourth and fifth, respectively, while Alexander Sims ran off at the first corner and dropped down the field.

With De Vries choosing not to take his second attack mode, Di Grassi eventually caught the leading Mercedes and got a good run along the start straight. The Venturi driver pulled alongside and tried to drive around De Vries into turn 18, but De Vries ran wide and pushed Di Grassi out, who then kept to the inside to robustly battle past the Mercedes and into the lead of the race. The stewards announced they were investing the incident, before later deciding to take no further action.

Once Di Grassi’s attack mode had expired, Venturi team mate Edoardo Mortara had his attack mode still active and began catching Di Grassi ahead. Mortara was able to get a run on his team mate and made a clean pass into turn 18 to take the lead.

De Vries dropped back to fourth when he eventually took his second attack mode, but once it had expired, he then found himself under pressure from the Techeetah of Jean-Eric Vergne, who then attacked the Mercedes into turn 18. As the pair went side-by-side into turn 19, they made contact and De Vries came off worse, losing momentum and dropping down to tenth place.

Frijns passed Di Grassi for second place, but then with just under ten minutes remaining, Alexander Sims lost control of his Mahindra at turn six and hit the wall. While his car sat stricken on the side of the circuit, the Safety Car was deployed to allow the Mahindra to be recovered.

As the field snaked behind the Safety Car, the drivers had to come to a sudden stop when they arrived behind a crane making its way through the narrow, twisty first sector, before eventually continuing moments later.

Mortara duly rounded the final corner to take the chequered flag, with Frijns finishing second and Di Grassi completing a double podium for Venturi in third. Andre Lotterer finished fourth, ahead of Jake Dennis and Vergne in sixth.

Stoffel Vandoorne finished seventh, ahead of Oliver Rowland and Pascal Wehrlein. Polesitter and race one winner, De Vries, claimed the final point in tenth. Oliver Askew put in the best rookie performance again in 12th, while Dan Ticktum and Antonio Giovinazzi finished as the last drivers running in 20th and 21st, respectively.