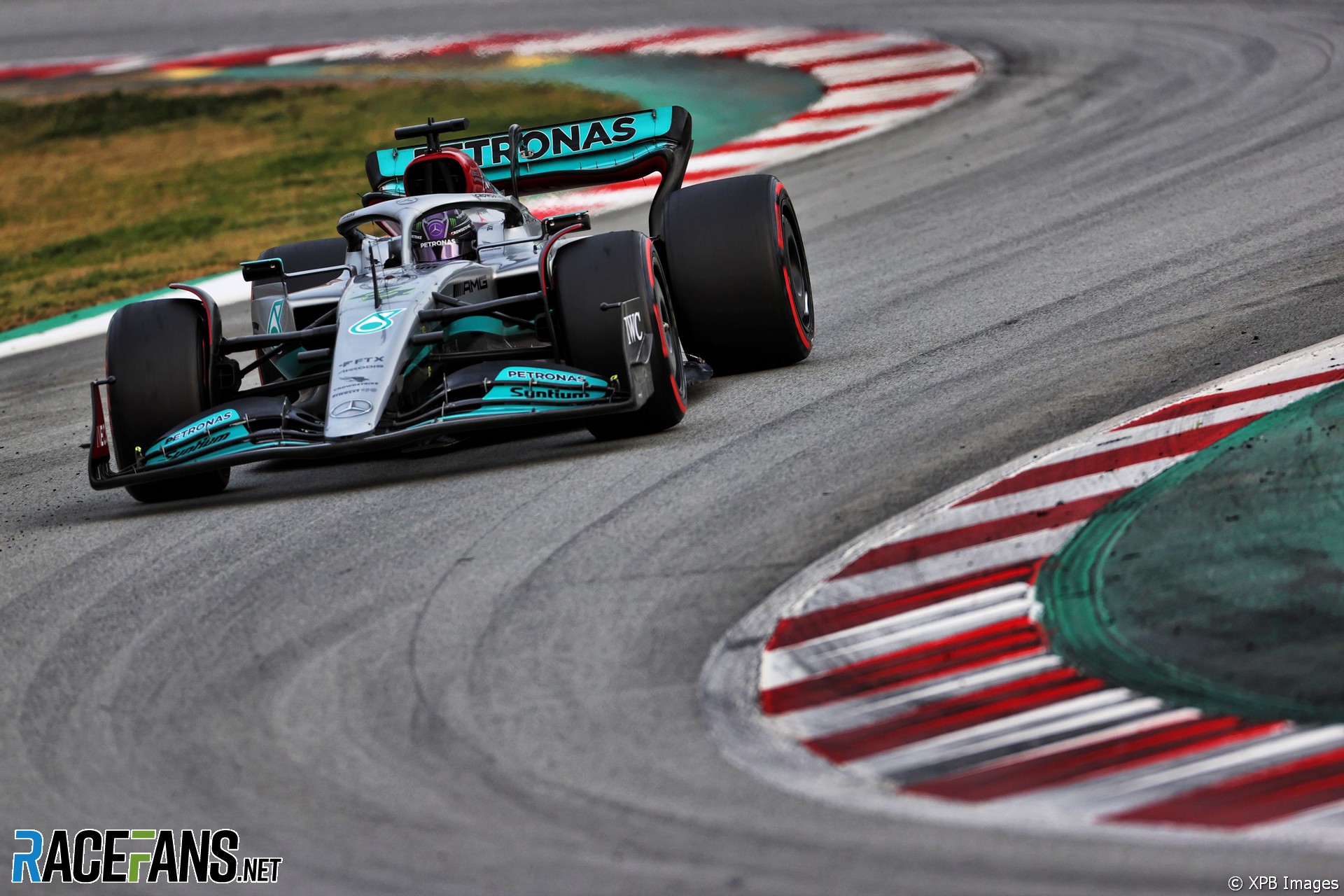 Lewis Hamilton and George Russell put Mercedes on top of the timesheets at the end of the final day of the first pre-season test for the 2022 F1 season.

After Russell set the pace in the morning session on the the softest tyre compound, Hamilton used them late in the final hour of running to put both Mercedes drivers first and second on the final day and for overall fastest lap times from the test.

In the morning, Russell’s early benchmark of a 1’19.233 was enough to see him go quickest of the test so far during a disrupted first session in which there were five red flag stoppages.

During the lunch break, Pirelli soaked the circuit to allow for some wet weather tyre running during the afternoon session, which helped to demonstrate the visible impact the new technical regulations have made to how cars disperse spray at high speed.

The track eventually dried out, allowing many of the drivers who had taken over the cars for the afternoon session – namely Hamilton, Perez, Carlos Sainz Jnr and Daniel Ricciardo – to enjoy some runs on the dry tyres. Hamilton used a fresh set of soft tyres to lower the fastest lap of the day and the entire test with a 1’19.138, just under a tenth faster than team mate Russell.

Early problems in the day led to a number of teams cutting their day’s running short. Alpine suffered the most spectacular problems when Fernando Alonso experienced a hydraulic leak which led to a fire on the rear of the A552, which meant Esteban Ocon was unable to get any running in the afternoon.

A similar problem halted Aston Martin. After Sebastian Vettel stopped on circuit prior to the lunch break, Lance Stroll was unable to drive a single lap in the afternoon session as Aston Martin confirmed that an oil leak had caused a similar fire in the AMR22.

Yuki Tsunoda was left sitting in the garage after team mate Pierre Gasly pitched his AlphaTauri into the barriers in the morning session, causing damage that the team was unable to repair in time for Tsunoda to take over in the car.

Valtteri Bottas’s difficult test continued on Friday as he was only able to record 10 laps in the C42 in the afternoon. He has covered the fewest total laps of any of the 20 race drivers to have partaken in the test.

The second three day test will take place in Bahrain between Thursday 10th and Saturday 12th of March.