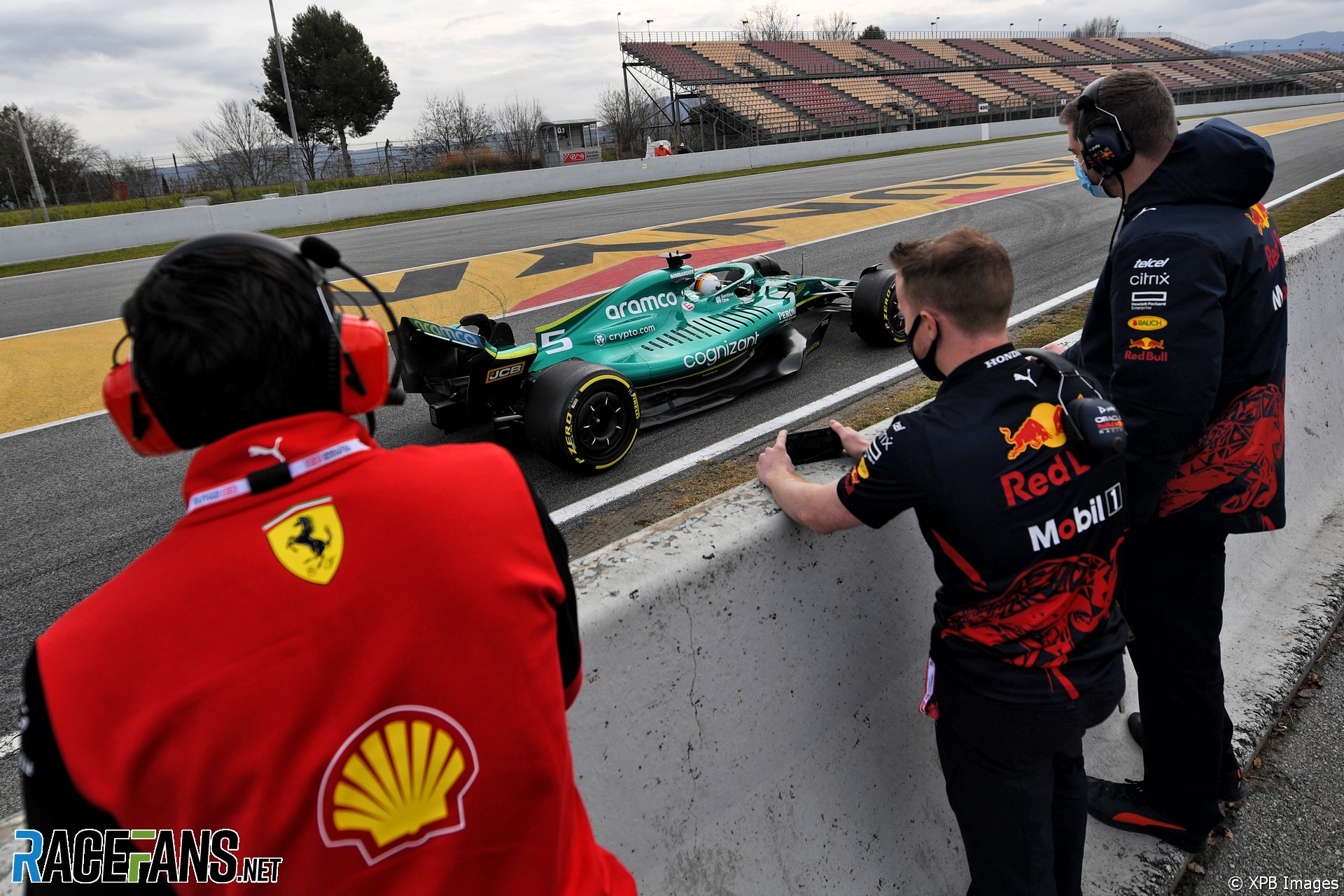 The first pre-season test is always one of the most exciting times of the motorsport calendar – but the buzz over the first real run outs for F1’s radical new cars was quickly muted by far more serious issues in the world.

In her first Paddock Diary, RaceFans’ newest reporter Claire Cottingham provides an insight into the first three days of on-track action for 2022.

Formula 1’s first pre-season test had a real buzz about it. Many fans – and I include myself among them – were itching to see the new machinery after the sneak peek during various car launches and many teams did not disappoint once on track at Circuit de Barcelona-Catalunya.

Arguably the anticipation was heightened after it was announced there would be no live television coverage of the three-day event. As was the case with all tests until a few years ago, fans had to rely on the on-site media – photographers, camera operators and journalists – to update them from the track.

After a relatively easy flight into Barcelona on Tuesday evening, I woke up early to collect my accreditation from the circuit, on an unexpectedly cold morning.

George Russell was the first of the Mercedes drivers to run, getting to grips with the W13 as he finally got his hands on the new chassis properly, watched on by team mate Lewis Hamilton.

Looking out over from the media centre, which overlooks the pit lane, I kept an eye on the ever-inquisitive Hamilton, as he studied the Mercedes leaving the garage.

Hamilton then started making his way up the pit lane, clearly eager to scope out the competition, taking a keen interest in Max Verstappen and the Red Bull. The photographers eventually caught on to who was standing next to them, as Hamilton craned his head into the garage for a better look. You can’t blame him; this was his first opportunity to check out the competition and he took full advantage.

Continuing on his way, Hamilton briefly bumped fists with various team members, before returning to the Mercedes garage ahead of his afternoon session, seemingly happy with his discoveries.

After two years of interviews conducted over Zoom and similar platforms, F1 introduced the return of face-to-face press conferences ahead of the 2022 season, with Hamilton, Daniel Ricciardo, Sergio Perez, Nicholas Latifi and Guanyu Zhou joining us during the hour’s pause in track activity for lunch.

Hamilton especially looked relaxed from his break, explaining he had taken a significant time away from his phone and social media and spent his downtime with family. Ricciardo said much the same, after finally visiting family in Australia as Covid-19 restrictions were lifted.

Regardless of the ever-present masks, some normality had returned to the F1 paddock, warmly welcomed by all parties. I was able to ask Hamilton about his thoughts on the changes to the pre-race ceremony, with limited talk about the actual handling of the new cars as only Latifi had been running in the morning.

After a detailed conversation with Ted Kravitz from Sky Sports F1 about how to mould the wax of a Mini Babybel into the shape of a Ferrari sidepod, the first day of testing was over.

Day two began with a chilling reminder of how fragile human life is.

On my phone was four breaking news notifications from the BBC telling me Russia had invaded Ukraine overnight. Tensions on the border had risen in recent weeks, and the implications of the attack were clearly going to be seismic worldwide and it was inevitable that it would also be felt in the paddock, particularly given Haas’s links to Russia through sponsor Uralkali and driver Nikita Mazepin.

The F1 test continued. Cars took to the track at 9am, but there was a different feeling in the paddock, one of worry and concern regarding the unfolding events.

People in the capital, Kyiv, had been hearing explosions and air-raid sirens all day. Suddenly, F1 showing off its new cars seemed almost irrelevant, and thoughts turned to what implications this would have on the sport – especially the Russian Grand Prix scheduled for September.

Sebastian Vettel was the first driver to be asked his thoughts on the escalation in the press conference, and he didn’t hold back.

The Aston Martin driver said he was “shocked” by the events unfolding and that he had made up his mind not to race in Sochi, if indeed it went ahead. Verstappen added: “When a country is at war it is not right to race there.”

Ripples were sent through the press room with the magnitude of the comments, as the furious typing began. Shortly after, I learned that the F1 CEO Stefano Domenicali had called a meeting with teams to discuss the Russian GP at 8pm that evening.

On Friday we arrived at a cloudy circuit, with the sound of engines firing up echoing around the empty grandstands. I immediately made my way to Haas to see if the Uralkali branding, Mazepin’s father’s company, had been removed from the motorhome.

It was a difficult moment for the entire team. Reserve driver Pietro Fittipaldi, whose team principal Guenther Steiner later admitted could replace Mazepin, stood inside the motorhome, watching as images from Ukraine dominated the news.

The final set of press conferences got underway, with most drivers in seemingly good spirits. But the mood changed significantly at the mention of Russia, and F1’s decision to cancel the race. After asking his thoughts on the situation, I felt goosebumps as Pierre Gasly spoke of his personal connections to Ukraine and fears for the country. You could’ve heard a pin drop.

In the afternoon, I made my way to the pit entrance to watch the cars contend with a wet track for the first time, but over the course of the three days the tone of the test had changed unmistakably.

Hamilton crossed the line fastest as the curtain fell on the first testing session in 2022. Though for everyone the focus remained on the job at hand, there was undoubtedly a sense of concern and sorrow, and a feeling that real life had pierced F1’s paddock bubble again.