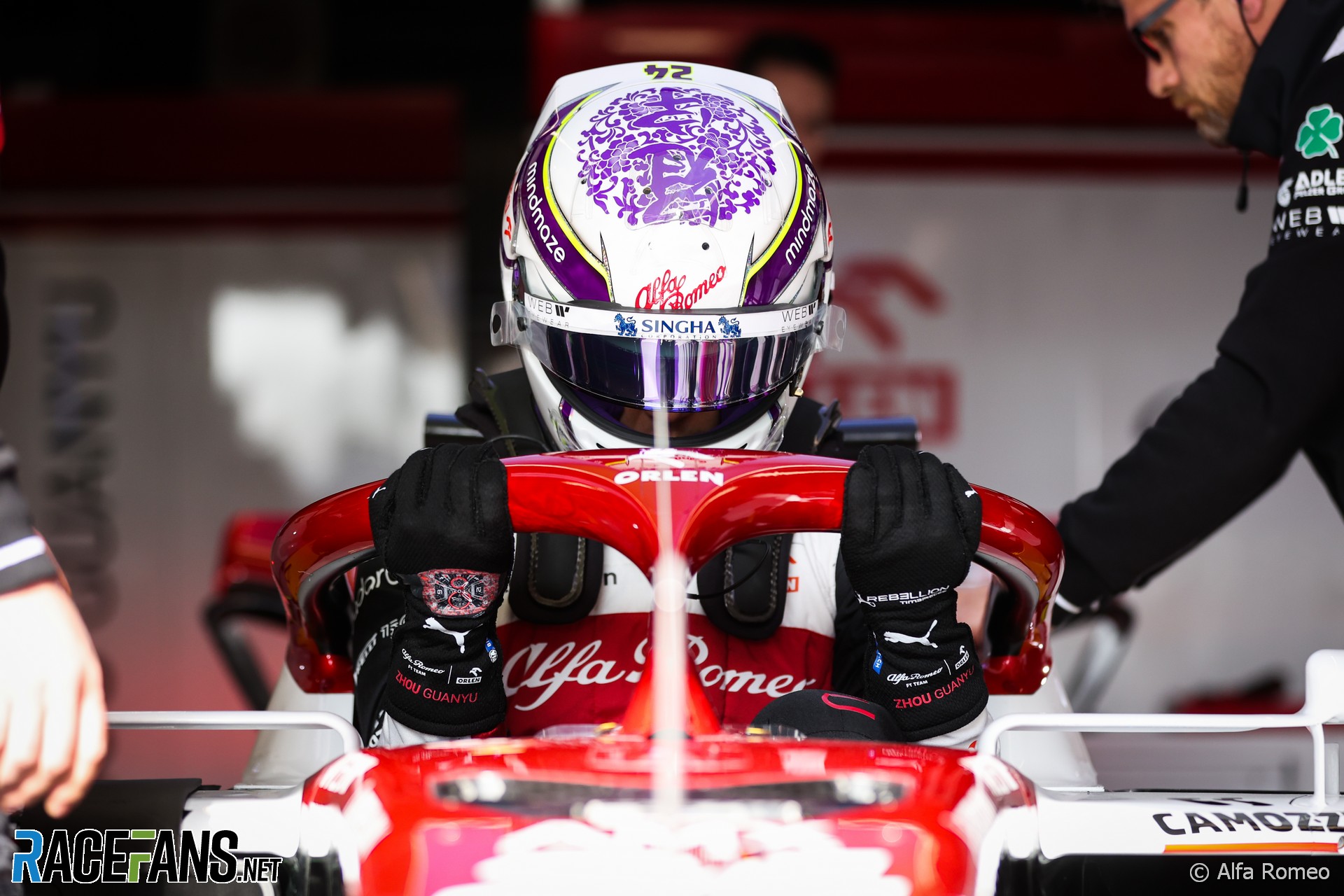 In the round-up: Guanyu Zhou says he feels he is under less pressure preparing for his debut F1 season than he was under at the end of his final year in F2

More pressure on me in F2 than F1 – Zhou

Guanyu Zhou feels he is under less pressure preparing for his debut F1 season than he was under at the end of his final year in F2.

Zhou will become F1’s first Chinese driver when he makes his debut in this month’s Bahrain Grand Prix.

“To be the only rookie on the 2022 Formula 1 grid, I think there’s, of course, a little bit of pressure, but it doesn’t really get to me because I feel [there was] more pressure last season,” Zhou says.

“I had too many people watching me, having their eye on me, the end of my Formula 2 campaign. So that was a lot of pressure, but I think I dealt with that pretty well.”

Zhou says his aim for his debut year is to score regular points and aim to reach Q3 at every race weekend.

“I hope to achieve as many points as possible and try to always fight for the points, always [reach] Q3 for the team – I think that’s always the goal for the team.”

Alexander Albon says his new Williams team are operationally “very similar” to Red Bull, despite the difference in resources and recent championship performances between both teams.

Albon has moved to Williams to begin his third season as a race driver in Formula 1 after a year as Red Bull reserve driver following his replacement by Sergio Perez in the team.

Asked by RaceFans to compare how the two teams differed, Albon said that Williams operate “pretty similar” to his previous team.

“That’s not a bad thing at all,” said Albon. “The structures internally are slightly different in terms of how many people are working in what area of the team and things like that. How they designate jobs when at the track and things like that. But no, obviously they’re working in a very similar way. If there was something that stood out I would tell you, but there honestly isn’t.

Former IndyCar racer Danny Ongais has died at the age of 79. Having racied motorbikes in his native Hawaii in the sixties, Ongais enjoyed success as a drag racer, before moving into Formula 5000 and Indy racing.

He made 11 starts in the Indianapolis 500, but was badly injured in a crash during the 1981 race. Six years later another crash ruled him out of the race: His place went to Al Unser, who won. In 1996 Ongais took the place of Scott Brayton when the race’s pole-winner was killed in a crash during practice. Starting from the back, Ongais took seventh for Menard.

Alice Powell says wants to challenge for the W Series championship this season after finishing third and second in the drivers’ standings over the first two seasons.

Pre-season testing for the third season of W Series begins this week in Barcelona. The series will again support the Formula 1 calendar at eight rounds this year, with two-time champion Jamie Chadwick returning after she was unable to secure funding to race in Formula 3 or F2 this season.

Powell, who also returns for a third season, said she is aiming to take this year’s W Series title. “I’m delighted to be back and fully focused on W Series this year,” she said.

“I’m expecting this season to be even harder than last – Jamie Chadwick is back to defend her title, Abbi Pulling is back for a full season… and there are some really fast young drivers attending the pre-season test in Barcelona this week. But hopefully I’ll have the right tools to launch another strong bid for the title and be able to win the championship. I’ve finished third and second in the two previous seasons, so surely number one is next.”

Well I am back in the car at @TXMotorSpeedway the day after tomorrow, any suggestions how to manage these on both hands? pic.twitter.com/vt8c6IqagB

Herbert: It could happen again for Lewis (Sky)

"Mercedes and Red Bull topped the timesheets in last week's pre-season test in Barcelona and Johnny Herbert believes Mercedes have the edge going into the first race of the season."

"Beginning on Wednesday, the official three-day test will give teams and drivers time to prepare ahead of the 2022 season opener, which will see the field return to the Bahrain International Circuit in Sakhir for the first two races of a 13-round, 26-race campaign later this month."

"In itself, forcing teams to run total F1 rookies in free practice is okay. It will add at least something guaranteed to the reserve driver role and make it meaningful. Honestly, FP1 is not exactly the session worth paying the most attention to during the weekend. Track conditions are often inadequate or sometimes, such as with the night races, totally irrelevant."

"The British driver Arvid Lindblad was particularly outstanding. He was named 2021 Rookie of the Year thanks to his convincing results during the European Championship and the FIA Karting World Championship - OK."

There’s plenty of excitement among some Formula 1 fans about new season of Netflix F1 show Drive to Survive. However, @stefmeister wishes there was a documentary series designed to appeal just to hardcore F1 fans…

I watched and quite liked the first season of Drive to Survive but I tuned out of it part way through season two and also didn’t watch much of season three as I just don’t like the way the show plays with things to create narratives that don’t exist and things.

I was hoping it would be and would much prefer it to be a proper documentary and it simply isn’t. It’s clearly not something aimed at fans like me who have been watching long term, Who are deeply knowledgeable of the sport and who watch all of the races so are able to see through a lot of things they do to to ‘spice things up’.

It’s just disappointing/frustrating for me that there isn’t an alternative that gives fans like me something that is more of a proper documentary.
@stefmeister