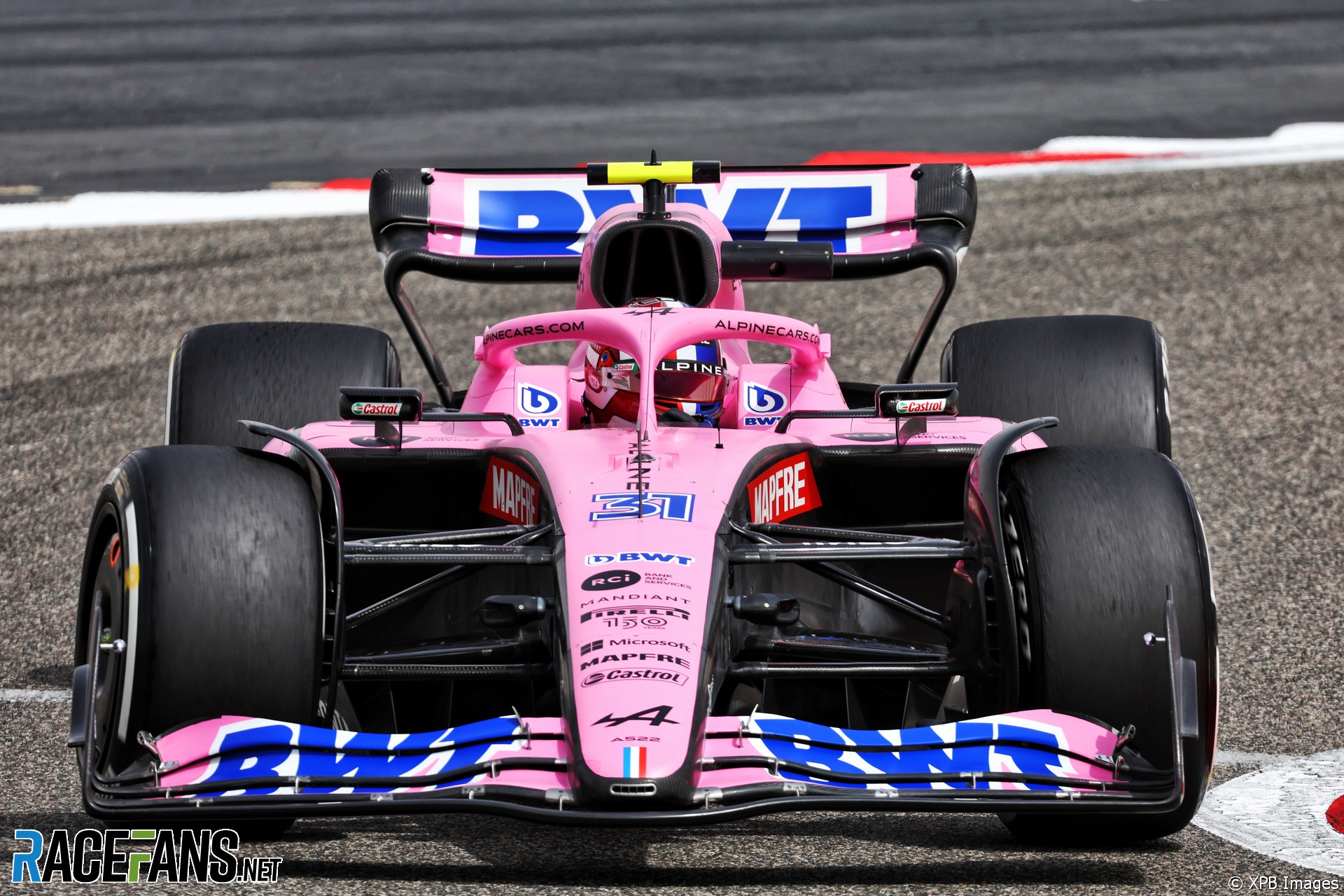 Esteban Ocon topped the times for Alpine in the morning session for the second day of running at the pre-season test in Bahrain.

In a car which had been re-stickered overnight and is now carrying the special pink livery it will use at the first two races, the Alpine driver set a best time of a 1’34.276 on the C4 tyres. That was just under a tenth quicker than Charles Leclerc after covering 59 laps over the course of the four hour session.

Max Verstappen was third fastest in the Red Bull RB18 having set his best time of the session on the C2 tyres, with Sebastian Vettel fourth fastest in the Aston Martin AMR22.

With more blustery conditions out on the Bahrain International Circuit than on Thursday’s opening day, many drivers battled with understeer especially through the downhill left hander of turn ten.

After McLaren admitted to brake problems on their MCL36 after the first day of running, Lando Norris – who is running a second full day in place of the unwell Daniel Ricciardo – was delayed further by the issue and only able to complete 29 laps.

But there were more severe braking concerns for Williams when Nicholas Latifi’s rear brakes began smoking before catching aflame. As Latifi tried to recover to the pits, he was sent spinning at turn 13 before coming to a halt. The Red Flag was immediately shown as marshals and Latifi himself attempted to put out the fire, which then caused one of the rear tyres to explode. Once the fire was out, the car was recovered to the garage where the team begin assessing the damage to the FW44.

There were problems too for Aston Martin when Sebastian Vettel left the pits and instantly felt a problem on his AMR22. Vettel cruised around turn four before pulling off the circuit and stopping on the Outer Circuit, allowing the session to continue without interruption. The car was brought back to the garage but Vettel was able to take to the circuit once again in the final minutes.

Mick Schumacher got his first run in the test in the Haas, but was only able to cover 23 laps in the VF-22 – the fewest of any driver bar Latifi. The team later confirmed he had been sidelined with an exhaust problem.

The final minutes of the session saw the FIA attempt to run a test of a race standing restart procedure, where drivers were instructed to join the track and complete a formation lap before running a dummy race restart from the grid. The FIA delayed the start attempt to allow Max Verstappen and George Russell to join the circuit, but the procedure was abandoned when Valtteri Bottas came to a stop at turn eight.