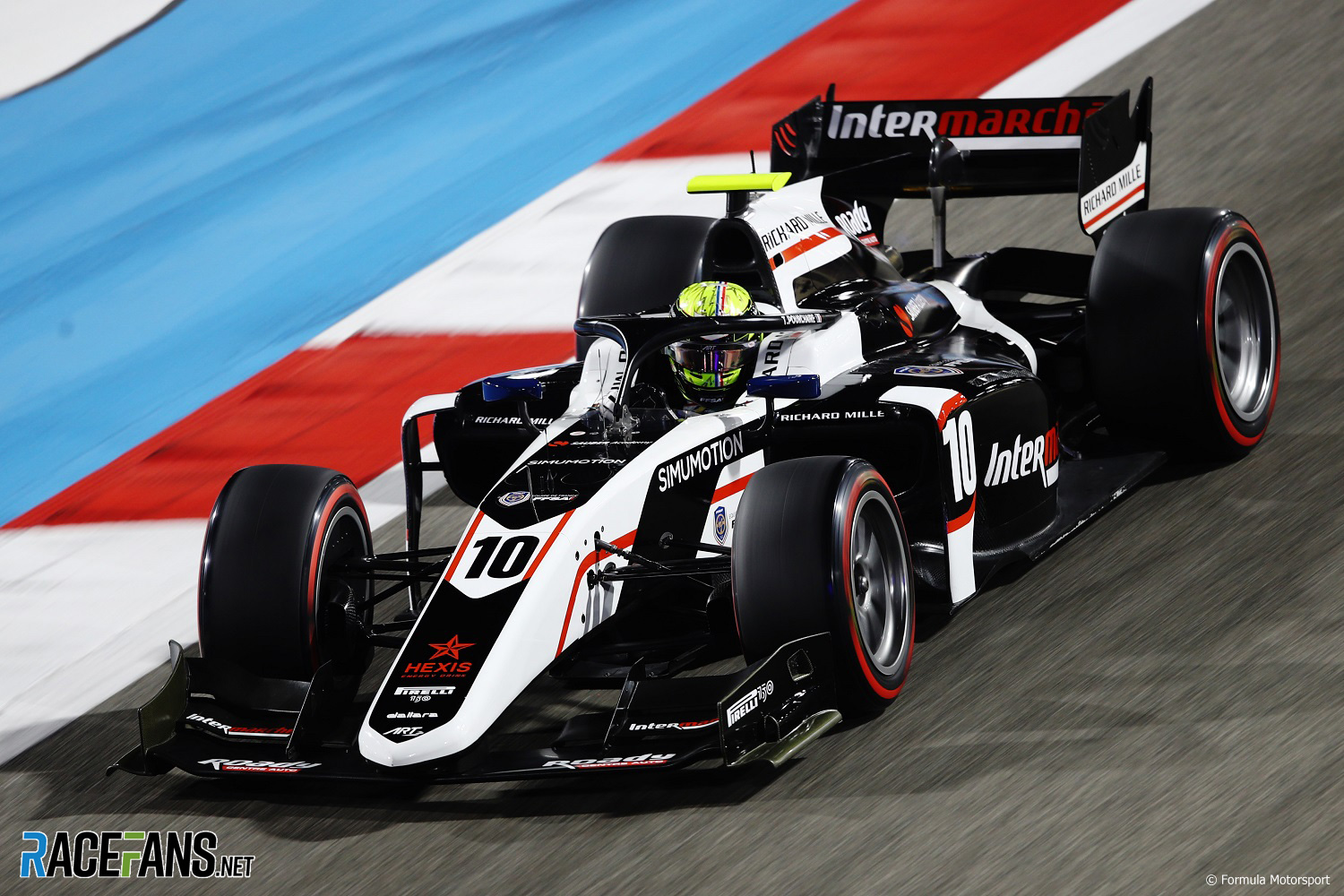 Jack Doohan took polep position during Friday’s qualifying session, with Theo Pourchaire lining up alongside him. Juri Vips and Logan Sargeant sat on the row behind as Ralph Boschung and Liam Lawson on the third row. Before the light went out, Dennis Hauger was unable to get away for the formation lap and his car was pushed to the pit lane.

When the race began, Vips claimed the lead off the line, Boschung following him up the straight, nearly claiming the lead through turn one. Doohan and Pourchaire had suffered extreme wheelspin, Doohan dropping down to third and Pourchaire relegated to fourth.

Frederik Vesti stopped on track at turn one at the start of lap two, prompting the first appearance of the safety car. The race restarted on lap five and Boschung, unlike at the race start, seemed to be caught napping. Doohan passed him into turn one, then Pourchaire followed into turn four, moving them both up to second and third, respectively.

Olli Caldwell was issued a 10-second stop-and-go penalty for being out of position at the restart. Ayumu Iwasa, who had once again started from last after crashing out on his first lap of Friday qualifying, had moved from 22nd to 11th seven laps in and was able to pass Caldwell for tenth into the popular overtaking spot of turn four.

Bizarrely, the first pit stops came from drivers who had started on hard tyres while those on the soft compound, were able to continue. Vips, Marcus Armstrong and Doohan were still running their starting tyres on lap 11, after Armstrong had claimed third from Pourchaire through turn one.

Iwasa passed Boschung, who had pitted, through the first turns of lap 12 to take seventh, showing the ongoing advantage to drivers who had started on softs.

Juri Vips pitted on lap 14 to disastrous effect, with the car needing to be raised twice in order to successfully switch his tyres. He re-emerged from the pit lane in 13th, having led the whole race. Doohan then pitted from the lead the following lap, coming back out to battle Pourchaire and the two collided in the fight for fourth, Doohan’s front wing ending up drastically bent by the contact.

Iwasa, the only car yet to pit at this point on lap 15, held the lead from Armstrong and Verschoor. Clement Novalak stopped on track on the same lap, but the race was able to continue uninterrupted.

Finally, Iwasa pitted on lap 18 with a somewhat slowed stop on the rear left, emerging in ninth, behind Roy Nissany. Pourchaire took the overall lead, with a 1.4 second gap over Felipe Drugovich in second.

Vips, on a furious recovery drive from his disastrous pit stop, overtook Boschung into turn one on lap 21, claiming fourth.

Caldwell, already penalised for being out of position on the restart during his first pit stop, was told to box on lap 22 in order to serve another five-second penalty for exceeding track limits at turn four.

On lap 28 the safety car was called on again following contact between Enzo Fittipaldi and race one winner Richard Verschoor. Hauger pitted for more tyres, but disaster struck when one of the set he was supposed to be switching to came off when he was released, sending it flying down the pit lane. Then the same problem happened a few garages down with Calan Williams. Both drivers’ races were ended and the pit lane was briefly closed to avoid yet more incidents.

The safety car was called in on lap 30, with Pourchaire leading the restart on the penultimate lap. Pourchaire got away with the lead, before race control announced that the restart lap would be the final lap of the race due to exceeding Formula 2’s maximum race time limit.

Pourchaire therefore took the chequered flag, his third Formula 2 win, with Lawson and Vips following him across the line.