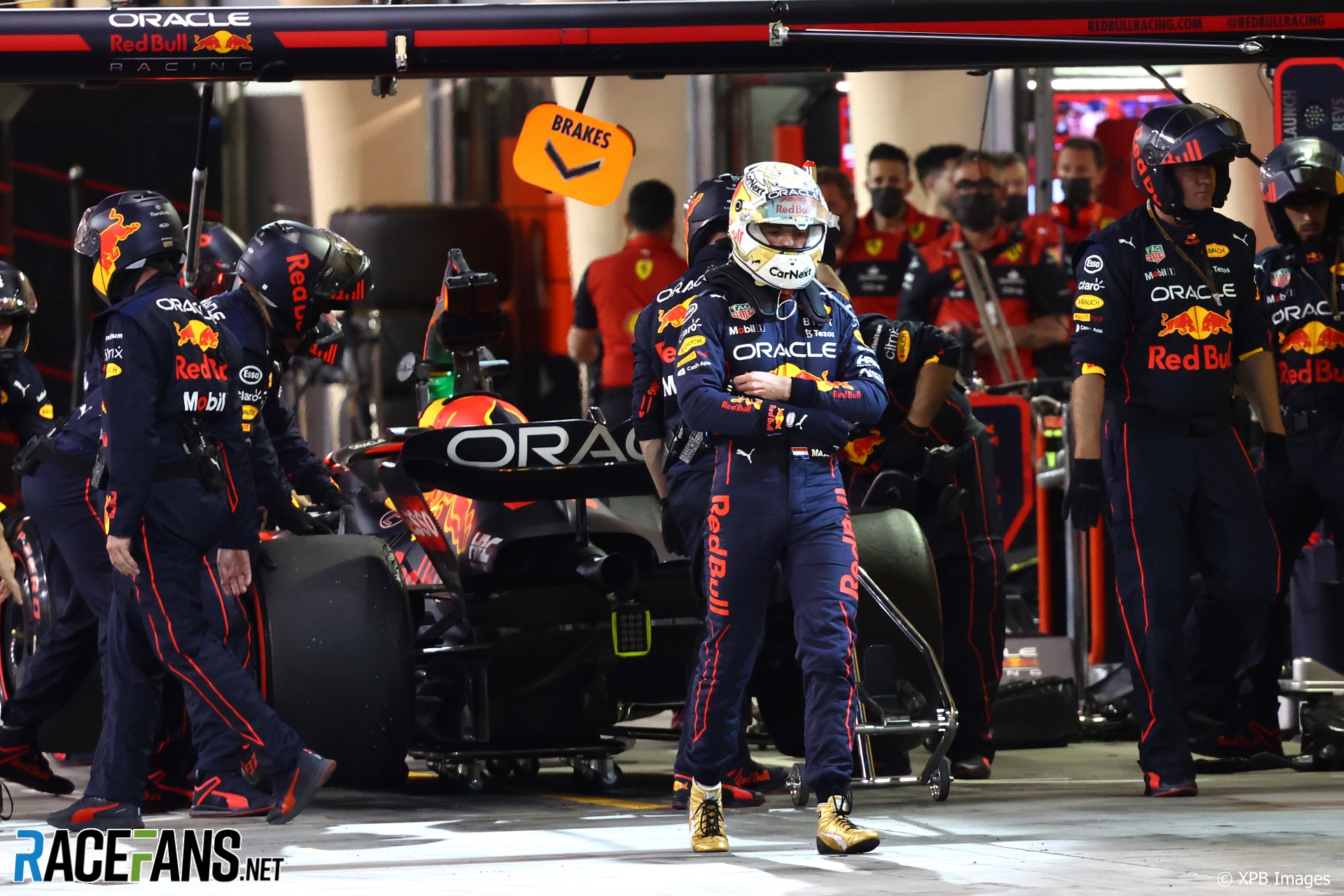 Max Verstappen’s first race as world champion must rank as one of the most frustrating of his career.

The Red Bull driver was vexed by braking problems, and ill-handling car and rapid tyre degradation. He also complained to his team about their strategic choices, becoming convinced he had missed out on an opportunity to pass Charles Leclerc for the lead.

His misery deepened in the final laps as he attempted to take on Leclerc by making an extra pit stop, only for the Safety Car to be deployed, which allowed the Ferrari driver to fit fresh tyres and stay ahead. Making matters worse for Verstappen, his steering suddenly became very heavy after his last pit stop.

Then, to cap that misfortune, a power unit problem ended his race. Having looked like a contender for victory when he headed the practice sessions earlier in the weekend, Verstappen left the first race point-less.

Verstappen lined up second behind Leclerc and the pair kept their places at the start with Carlos Sainz Jnr in pursuit. They started on soft tyres, Verstappen favouring used rubber so he had a fresh set to switch to later.

Lambiase soon told him to begin moderating his pace to conserve the car and tyres. However Verstappen soon encountered problems with his engine braking.

Verstappen’s braking problems began to clear up, though he had to significantly reduce how hard he was hitting the pedal. His soft tyres were also dropping off quickly, and the team began to prepare for his first pit stop.

Verstappen was advised not to push his fresh tyres too hard after leaving the pits. However, as he had pitted before Leclerc, he also had an opportunity to use the extra performance to jump ahead of his rival.

He fell short of doing so, but nonetheless had an opportunity to pass the Ferrari. He managed to do so, but only temporarily, Leclerc re-passing him each time.

The Red Bull could only sustain the pressure temporarily, however. “I was overheating a lot if I wanted to attack,” Verstappen explained afterwards. “So after the fighting I had with Charles I had to let him go.”

Verstappen got his overheating under control again, but it cost him time to Leclerc. The gap opened up between the pair of them, and soon Verstappen was indicating to his team that it was time for another fresh set of rubber.

The gap between Leclerc and Verstappen had opened so wide that Red Bull knew they wouldn’t be able to jump ahead of him however quick the world champion’s out-lap was. Lambiase made that point to Verstappen, but after Leclerc came out in front of him again the frustrated driver made it clear to his team he felt the ‘undercut’ had been possible.

Exploiting every avenue to take the fight to Ferrari, Red Bull brought both their drivers in together for a final stop. But bad luck struck again: Soon after leaving the pits Verstappen reported his steering had deteriorated.

Team principal Christian Horner explained what had happened after the race. “I think he bent the track rod when the car got dropped off at the final pit stop,” he said.

“That made the car inconsistent between left and right. So he did a great job with that.”

Lambiase chose his words very carefully in his communications with Verstappen. Red Bull were clearly at pains not to give the race director or rival teams any indication there might be a safety problem with the car, which might lead them to have to retire it.

“It wasn’t a safety concern,” Horner confirmed after the race. “It was just very uncomfortable for him to drive.”

Verstappen said the car was “not easy to drive because of just not having a feeling for what the car was doing” after the breakage.

“It was not natural. You can lose power steering or whatever, and it’s just heavy, but it was almost stuck in some places. So really difficult to drive.”

The next blow came when the Safety Car was deployed in reaction to Pierre Gasly’s AlphaTauri came to a stop as its power unit caught fire. Red Bull’s tactical move against Ferrari was thwarted.

When the Safety Car came in, Verstappen was more preoccupied with keeping Sainz behind him than attacking Leclerc ahead. But then came the power unit failure which ended his race.

“You always say to yourself and the team as well, we have to score points,” said Verstappen after the race. “It doesn’t matter if it’s first or second in the first race. You could see that in turn one at the start – I didn’t risk too much.

“But to lose so many points also for the team is very disappointing because in the championship, where sometimes it can be really tight to the end. These are very important points.”

Verstappen suffered a year’s worth of misfortune in a single race in Bahrain and left his race engineer in no doubt how he felt about it. But despite the occasional strong words on the radio, the relationship between the pair remains strong according to the driver.

“I don’t hold back, I say what I think in the car,” said Verstappen. “I was not happy with what we were doing or the balance of the car I had, with the strategy.

“It was not necessarily directed to GP because I have a really good relationship with him. But of course, he’s the only one I can talk to. But we have to analyse quite a few things.”

103 comments on ““I don’t hold back”: Verstappen’s full radio transcript from his luckless Bahrain GP”