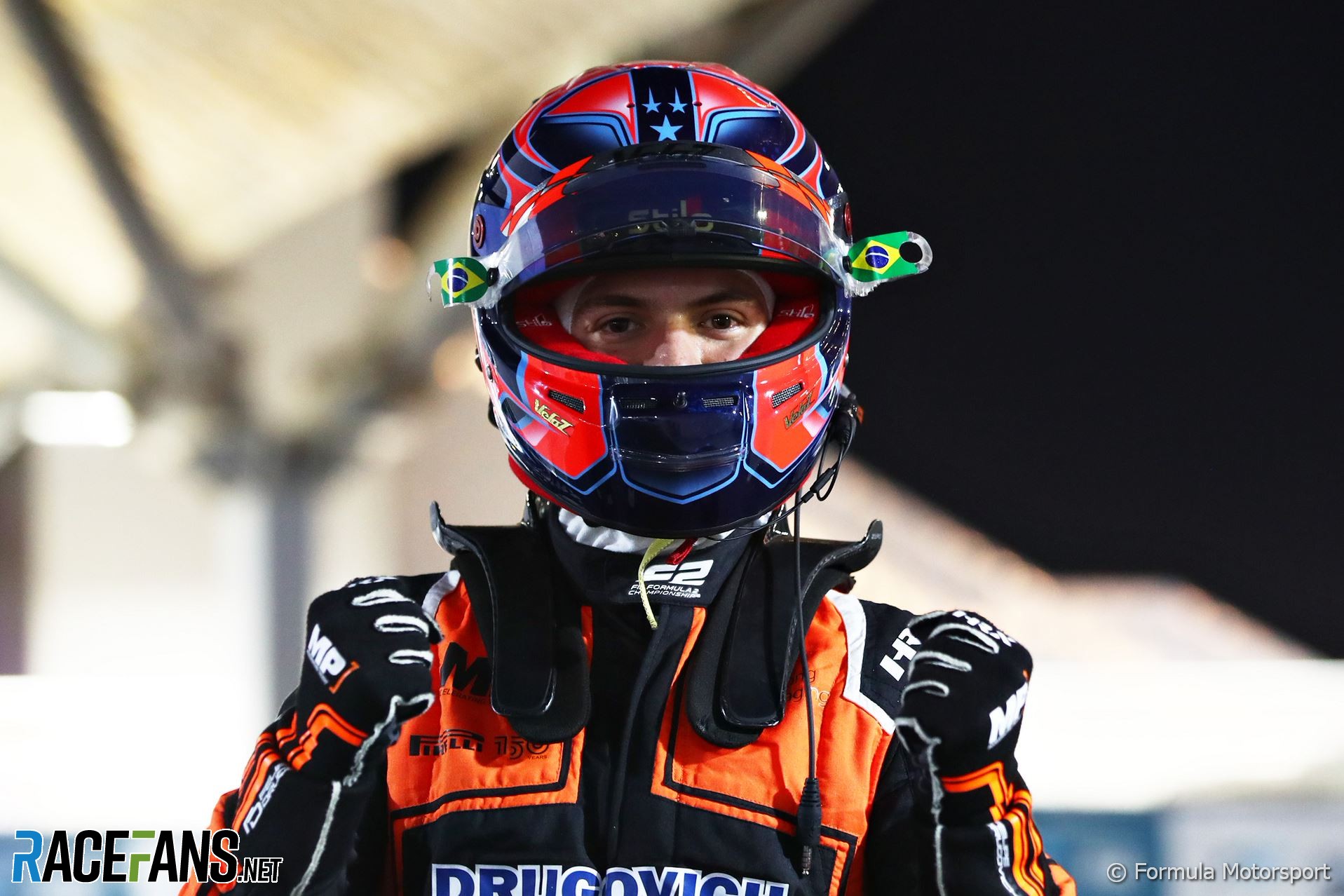 Felipe Drugovich took pole position for the Formula 2 feature race in Jeddah in a qualifying session which saw no fewer than three red flags in half an hour.

F2’s only practice session was disrupted by two heavy crashes earlier in the day. As a consequence of his crash, Cem Bolukbasi was taken to a local hospital for precautionary checks and therefore unable to compete in qualifying.

Theo Pourchaire was able to take part after his heavy crash in the final 10 minutes of free practice. However, with 18 minutes of the qualifying session remaining he was forced to pull his ART over to the side of the track, with a fire in the engine bay. Pourchaire, who had to extinguish his car following his crash in free practice, was forced to do so again.

At the time, drivers had only set their first laps, with Ralph Boschung leading the times for Campos, with a 1’41.538. The clock was stopped during the retrieval of Pourchaire’s car and drivers were sent out again with slightly over 18 minutes left in the session.

Drivers set out on flying laps immediately as the track went green, the risk of further disruption meaning banking a lap was essential. Marcus Armstrong was able to set the fastest lap of all, despite a strong, repeated challenge by Boschung to take back the top spot.

Boschung was on a flying lap that would have reclaimed the top spot when another red flag with 12 minutes remaining forced him to abort. Logan Sargeant had crashed at the exit of turn 13, leaving his car stranded on track with broken rear suspension, wheels splayed.

Jake Hughes was leading the times at that point, but after the session restarted quicker laps were posted. Ayumu Iwasa took the early lead with a 1’41.194 but Boschung was again on a flying lap, setting purple sectors, when the third red flag of the session was shown. Visibly and furiously frustrated in his car, coming back into the pits, Boschung was once again forced to abort.

To add insult to Boschung’s injury, this third red flag appeared to be an error; the medical car was sent out to lap the track after drivers had returned to the pit lane but circled the track without coming across any incident to attend to.

After the medical car had returned, it was declared there had been a false alarm where GPS had shown Frederik Vesti’s car stopped on track. Race control red flagged the session but Vesti had returned to the pits without any on-track issue.

To further ruin what had looked like a strong qualifying session for Boschung, who certainly could have been in the hunt for pole, when the session restarted with just under five minutes left Boschung’s first full-on lap was interrupted by being blocked by Vesti. Unable to take on more fuel, Boschung’s session ended early and he was forced to watch as drivers’ lap times fell.

Verschoor set an impressive 1’40.548, the first driver below 1’41 but Drugovich snatched the fastest time, crossing just before the chequered flag with a 1’40.422 that saw him neatly seal pole. Boschung was forced to settle for fifth.

Jake Hughes qualified 10th, so will take the partially-reversed grid pole for the sprint race tomorrow.