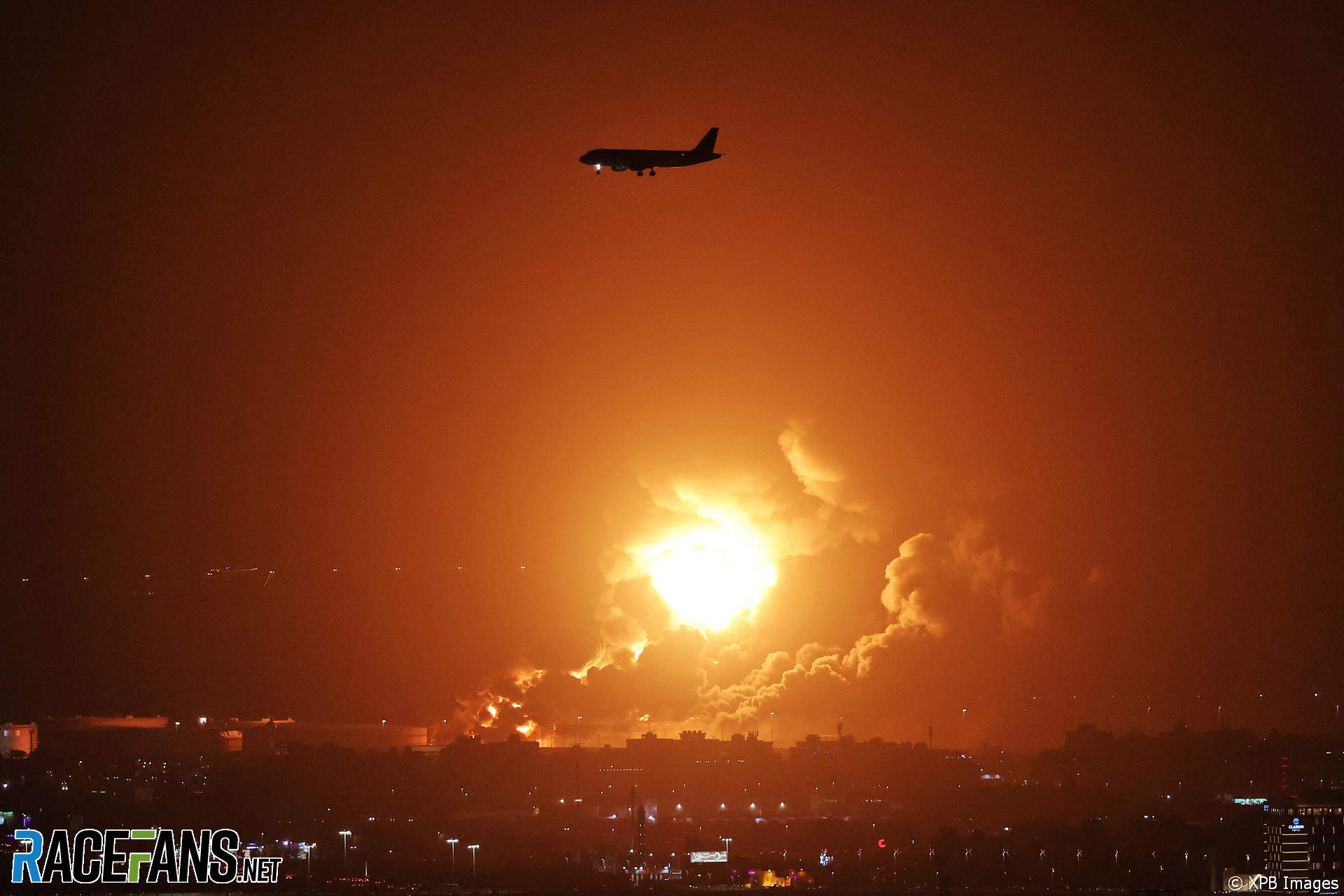 Formula 1 told drivers it will reconsider the safety and security of all its events following the missile attack which occured yesterday, 10 kilometres away from the scene of this weekend’s race.

Valtteri Bottas and others revealed details of the discussion in the late night meeting between the Grand Prix Drivers Association and F1 bosses following the attack.

He confirmed drivers raised concerns about the safety of the event after seeing smoke from the large fire which broke out at the oil plant which was struck near the circuit.

“We drivers, we were all concerned if it’s safe for all of us to be here, to race here,” said Bottas. “And we got decent explanations on things.

“Also we went through all the options – like what if we don’t race? For example, that will still mean the teams would have to stay here for a couple of days packing stuff. And it’s not like you can create suddenly new flights to get home.

“We’re already here, so our best option was to race here. They’ve increased all the safety facilities and all this defence. So I think everyone agreed that we might as well do the race and hope for the best.”

F1 is in the second event of a 15-year deal to race in Saudi Arabia. Bottas said the series will consider whether it is safe to continue racing there and at other venues.

“Obviously last night was quite late and in some places you don’t need to have that discussion,” he said. “So it’s a unique grand prix.

“At least Formula 1 promised us to reconsider all the events for the future, including this one, to make sure that we go to the right places, that they can guarantee our safety 100% always when we go there.”

Bottas said he “preferred not to answer” whether he was in favour of racing at the track this weekend or in future. However, he said the GPDA was “really, really united at the moment” despite the decision to do ahead with the race.

“It felt like everyone was kind of feeling the same. With any issues, we will always regroup and go through them and give our view. If it makes a difference that’s nice but it’s not always guaranteed it will.”

GPDA director George Russell said F1 CEO Stefano Domenicali had the backing of the association and also expects further discussions after this weekend.

“I think clarity was needed, the conversation was certainly needed and I think it was good. We’re all standing united, firstly between all the drivers and then together with Formula 1 and ultimately we trust in Stefano and Formula 1 as a whole.

“We wouldn’t be here if we didn’t think it was right to be here. So obviously that’s going to need some clarity after this race weekend where we go from here. But from what I understand, everything was under control in this specific region and what happens outside of this region you cannot control.”

The drivers were “very united in asking for some transparency”, said Fernando Alonso, because “we were not happy just seeing the smoke clouds while driving and maybe not knowing the truth and the facts and everything.

“So we wanted some transparency in that, we found that and I think we were happy.”

He said he is satisfied with the reassurances he’s had from those in charge about the security of the event. “We are here. Once we are here, I think we need to just make sure that the safety of everyone is guaranteed in a way.

“We [the drivers] look like we were there talking about our safety. But honestly, we are concerned about your safety: Media, mechanics, fans, everyone.

“So we think that all the organisers and the authorities and everyone, F1, FOM, are happy with how things are right now and how [they are] for the safety of everyone. So we have to move ahead. But we will hopefully not see any more of this kind of thing.”

Lewis Hamilton said the drivers “worked together as a group, we all discussed and made a decision as a sport.”

“I don’t feel a particular way about it,” he added. “I’m looking forward to get out.”