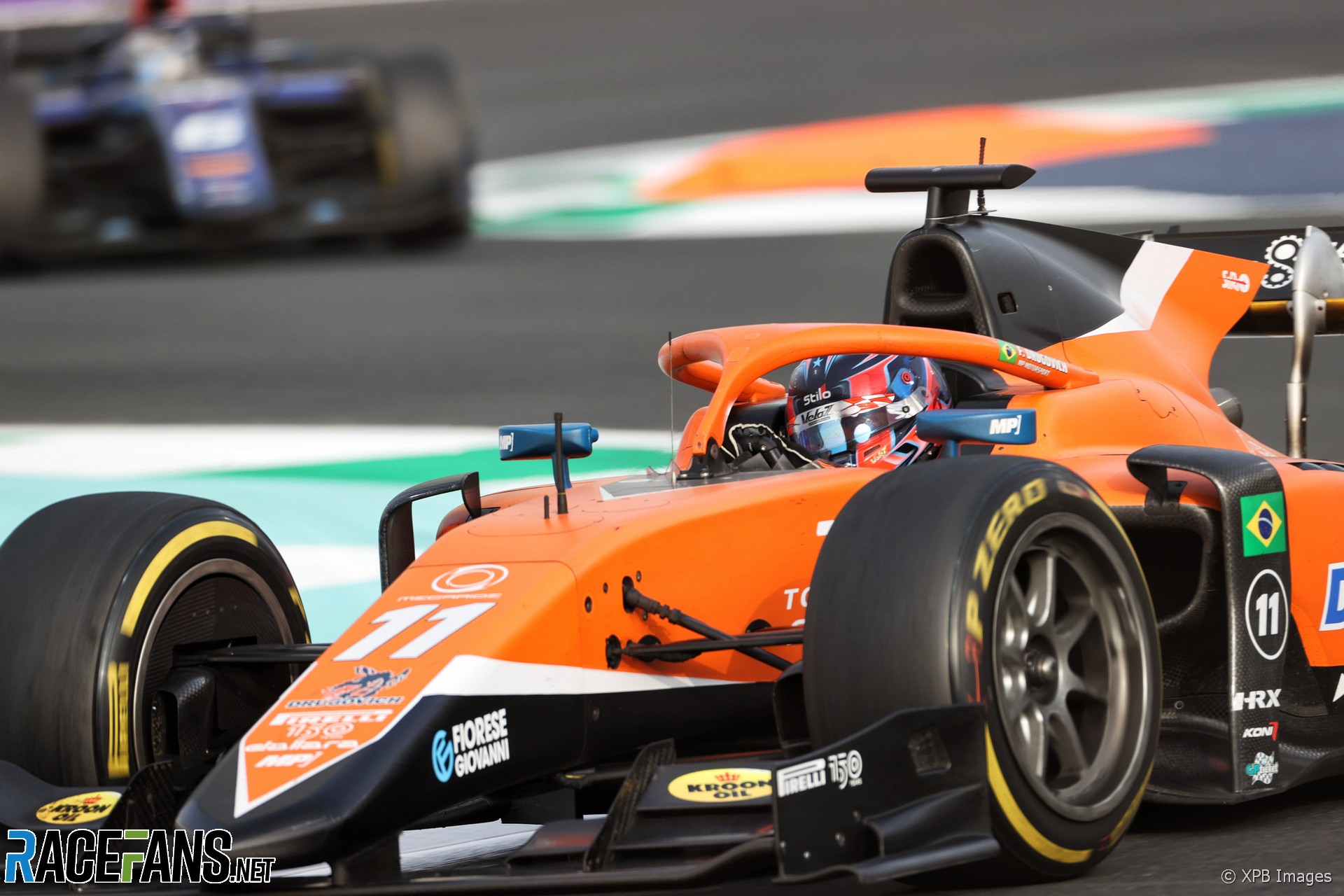 Felipe Drugovich won the Formula 2 feature race from pole in which all 27 laps were spent under green flag – the first uninterrupted session in Jeddah.

Drugovich had taken pole during Friday’s red flag-disrupted qualifying session, with Richard Verschoor lining up alongside him on the front row. Marcus Armstrong took third and Ralph Boschung, frustrated during qualifying, started fourth. Clement Novalak was placed under investigation for an unsafe release when drivers went out for the formation lap.

After drivers initially lined up on the grid, the first start attempt was aborted with drivers sent around for another formation lap. There was no obvious cause, such as a stalled car on the grid, for the aborted start but when cars returned to the grid, they got away cleanly at the second time of asking.

Drugovich held the lead, Verschoor staying in second and Armstrong in third. Boschung lost out to Lawson in the first three corners, who claimed fourth. Lawson was able to then pass Armstrong for third, the two following inches apart down the pit straight at the start of the second lap.

Boschung seemed to be fading rapidly having started on the soft tyres as he was forced down to eighth by Dennis Hauger. Jehan Daruvala, who had started 14th, was the first driver into the pits, followed by leader Drugovich on lap nine, both switching from soft to hard tyres.

Lawson suffered a disastrous pit stop on lap 11, stopping at the end of the pits with a loose wheel and ending his race, the second retirement of the day. Lawson was summoned to the stewards for the unsafe release, along with Novalak.

Drivers largely settled into a rhythm after the initial pit stops, except that Daruvala was able to continue his charge up the pack. He passed Armstrong on lap 19 and continued to move forward as drivers on the alternate strategy took their pit stops.

Hauger was one of the last drivers to pit, coming in on lap 23 and re-emerging in eighth while Jack Doohan left it a further two laps, only coming out with three laps remaining. Following his pit stop and the switch to soft tyres, Doohan set the fastest lap of the race and sealed the bonus point available for it by managing to stay in ninth.

Frederik Vesti spun exiting turn one on the final lap, but as most cars had passed him his ART only brought out a brief local yellow flag, rather than a Safety Car.

Drugovich now leads the championship, after former leaders Lawson and Pourchaire failed to finish the race. Formula 2 next races at Imola on the weekend of the Emilia-Romagna Grand Prix in late April.