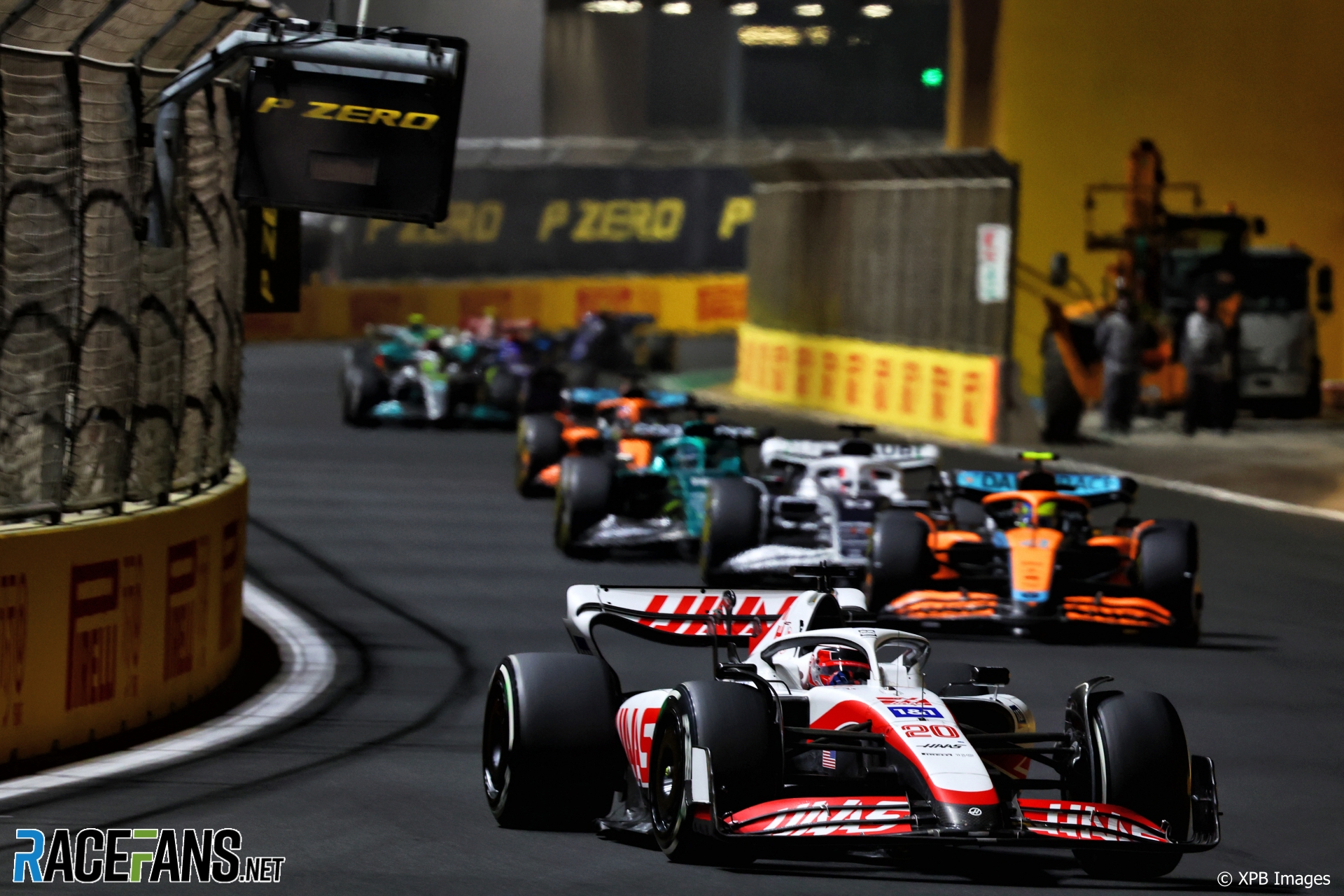 Haas car is ‘just doing what drivers want it to’ – Steiner

Magnussen’s ninth-place finish on a less than ideal weekend for Haas in Jeddah shows they can lead the midfield this year, says Steiner.

“Kevin didn’t drive an F1 car for a year, comes here, has never driven here, has a miserable Friday we did three timed laps. Then he goes out there and does this time in qualifying and couldn’t do a better lap because of his neck. And in the race he said ‘the car is just doing what I want it to do’.

“Obviously, there’s always things to improve. But he said it’s really nice to drive if you’re so competitive, he said ‘I can challenge all the time.’ So the car is pretty good and then it’s down to having a good week and finding the right set-up and getting the best out of it.

“If we get the best out of it, I would say we are at the front end of the midfield.”

Formula E to use same Monaco layout as Formula 1

Following last year’s move to use the whole Monaco grand prix track configuration, with some minor alterations to the nouvelle chicane, Formula E has confirmed that it will run the Monaco Eprix on the full grand prix circuit with no modifications this year.

“This year, we are taking the final step, removing the minor modifications that were made for Formula E, so that we can to see our drivers and cars performing on the historical layout. This is another major achievement for our discipline and we look forward to another exciting race on the streets of Monaco.”

Mercedes were waiting for McLaren cue for Hamilton pit window

Mercedes’ trackside engineering director Andrew Shovlin says the team was watching to see when McLaren pitted its drivers’ to prompt them calling in Lewis Hamilton during the first stages of the race at Jeddah Corniche Circuit.

“The situation was that the hard tyres were holding up very well, they were very consistent and what we were watching at this point was where the McLarens were, that pit stop gap behind us,” Shovlin explained. “So, the intention with Lewis was to try and pull them out of the window and we were slowly doing that.

“I think the lap that we would have stopped at would have been somewhere in that 39 to 40 region but the intention was always to try and clear those McLarens, then we would have been racing with Valtteri [Bottas] and the two Alpine cars. Our prediction said that we had enough pace to pass them on track and that would have enabled Lewis to get up to P6 in the final standings.”

I know what I'm about to say sounds extremely fake but I promise a handful of very notable NFL execs/GMs/coaches asked me this week to explain F1 at the owners' meeting becasue either they want to get into it, their kids are into it, or they just wanna know how it got so big.

Some European F1 fans seem to be annoyed at how many races America has/will have – a reminder that this continent has 10 this year. Africa, which last time I checked was a bit bigger, has 0. pic.twitter.com/6SZfVk9fea

The Governor of Nevada (largest city: Las Vegas) teasing an #F1 announcement at 7:30pm local time (3:30am tomorrow in the UK)…https://t.co/TO3VxyBqnO

Two honorary degrees will be conferred as part of the Graduation Day ceremonies. Ross Brawn is managing director of the Formula 1 motor sports division and is credited for supporting the evolution of Formula 1.

It was the first time that I'd seen Jon since the accident. As a vascular surgeon, he had one of the hardest jobs in making sure that my leg did not need to be amputated.

When you look at the Teams Standings, you will see that Hitech Grand Prix are top. And that’s without any poles or wins so far. The British squad have managed to score points with both cars on three occasions, with Jüri Vips finishing in points scoring positions in every single race.

Through pre-season tests, in-season tests and free practices, teams will be told in which session they are allowed to trial the P2P system, while in pre-event tests and in qualifying P2P will not be allowed. In all sessions where it is used incorrectly, all lap times will be cancelled, and therefore from qualifying drivers will be made to start from the back of the grid for the next race they participate in.

'I was stuck behind Mark Webber, maybe Michael Schumacher for a bit,' Grosjean said. 'I still remember going between the third chicane and the fourth one, and braking under the bridge, and thinking: ‘Well, I can’t pass those guys. I’ve been trying for 20 laps.’'

"This is F1’s most hackneyed refrain, that they can effect positive change. Yet their argument is not backed up by any evidence."

As the question about whether DRS should still be part of Formula 1 in 2022 rolls on, Dr Mouse says that, ultimately, we won’t be able to see whether drivers could make passes without it until it’s suspended.

Slipstream isn’t needed as much if the cars can be very close by the braking zone anyway, and I think we’ve seen they can from the starts and restarts, before DRS is enabled, in the past 2 races. That leaves the option of outbraking your opponent into the corner very much on the table, as well as staying behind for several laps to put pressure on them. Of course, the weak point here is probably the tyres, but it would be interesting to experiment with vastly reduced or no DRS zones.

While ever DRS is available, I don’t think we will see whether the cars can race without, though. Why go for the difficult outbraking manoeuvre or close racing and pressure when you can use DRS?
@drmouse