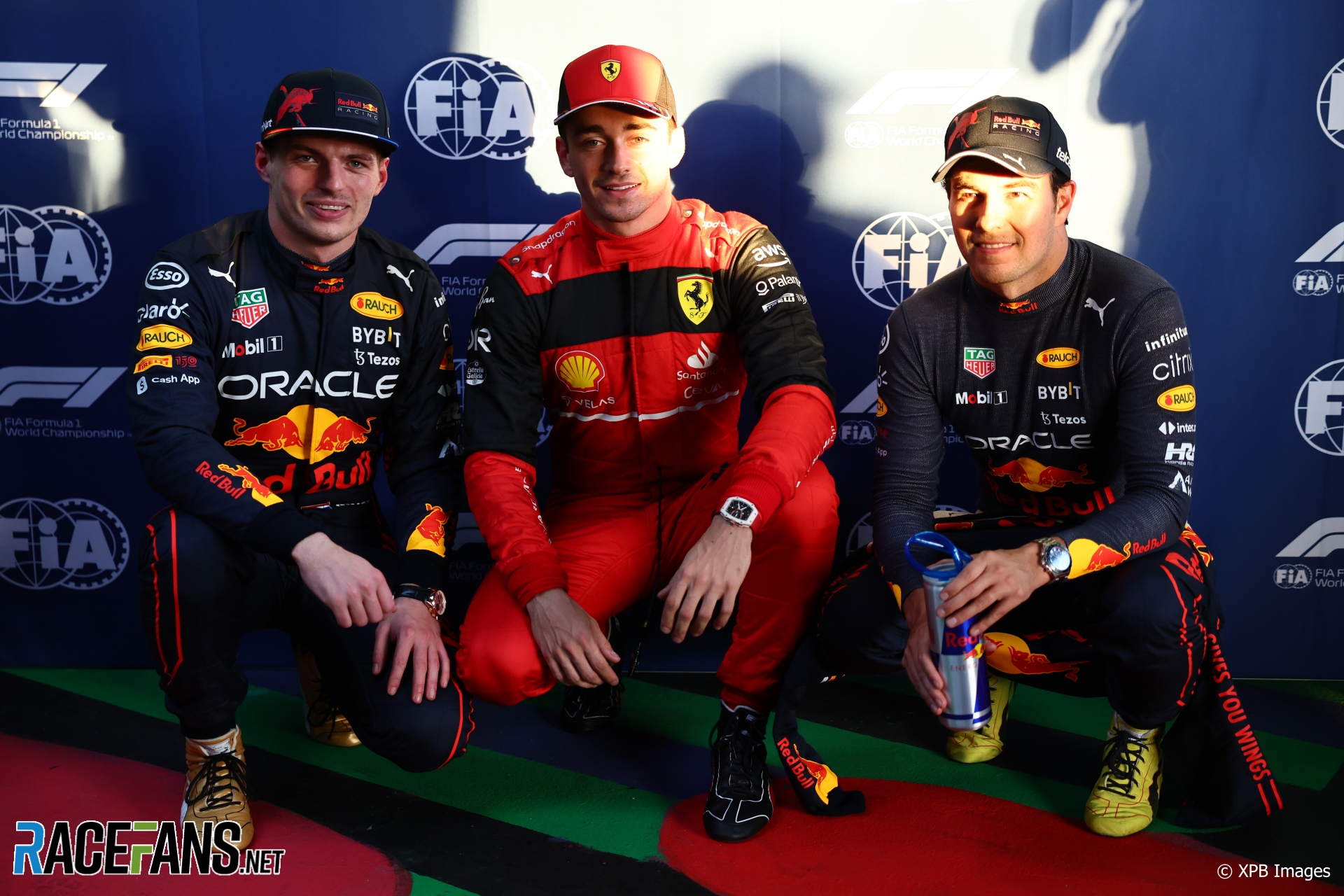 For the second time in three races at the start of the 2022 season, Charles Leclerc and Max Verstappen will occupy the front row of the grid together.

However, Sunday’s race will also be the first time this season where two Red Bulls will line up in the first three places on the grid. As much as Leclerc will be feeling confident in his Ferrari after taking pole by almost three tenths of a second – a huge gap by 2022 standards thus far – he will likely miss his team mate Carlos Sainz Jnr during the 58 laps around Albert Park as he faces what could be his third race in a row under prolonged attack from the world champion.

“It would have been easier for us to have both cars in the front,” admitted Leclerc after qualifying. “But it’s the way it is and and we’ll try to maximise it anyway.”

After arguably his most promising Friday and Saturday morning of the young season so far, Sainz did not hide is frustration at only being able to take ninth on the grid.

With a race winning Ferrari starting down in the midfield, Sainz’s progress could prove the acid test of both the new 2022 technical regulations and the heavy modifications to the Albert Park circuit. If he avoids trouble at the start, Sainz will almost certainly progress through the field over the course of the race.

This year, with cars that are easily to follow, a much faster circuit and multiple DRS zones, the Ferrari will have far greater opportunities than ever before to pick off cars ahead on track – even if Sainz is remaining cautious.

“I’ll obviously try to recover as much as possible, but without the fourth DRS zone the circuit hasn’t changed that much from the old one and it will be tricky to overtake,” said Sainz.

While one Ferrari driver plays catch up, the other will likely be staring at the mirrors rather frequently during tomorrow’s race. With Perez among the top names in the speed trap rankings around all three sectors demonstrating the top speed potential of the Red Bull, Ferrari racing director Laurent Mekies knows Leclerc is in for a long day on Sunday.

“So it’s going to be as intense as one can imagine – not only between Max and Charles, but I’m sure also with Sergio and hopefully Carlos will be getting back in the fight. So there could be a lot of surprise tomorrow. It can go either way based on how the race goes.”

And the race could develop in all manner of ways tomorrow, thanks, in part, to the elimination of the Q2 tyre rule for this season. For a second race weekend in a row, the soft tyre may not make an appearance at all in the race. Pirelli head of motorsport Mario Isola is confident teams will again prefer the medium and hard compounds.

“What we have seen so far in qualifying shows that it was the right choice to come here with two steps between the soft and the medium compounds, which has enabled the performance gaps between hard, medium and soft to be about equal,” Isola explained.

“Tomorrow should be a one-stop strategy using medium and hard, but as we saw today, the action here can be quite unpredictable.”

The most obvious route to the finish would be to start on the medium compound and switch to the hards to complete the sole stop, much as Verstappen and Leclerc – and indeed all of the top eight finishers – did in Saudi Arabia. But as Perez’s unfortunately-timed pit stop in Jeddah showed, there’s a risk of being caught out by a sudden Safety Car in a one-stop race, which could encourage some to extend the first stint as long as possible.

That Safety Car risk is especially high at a street circuit like Albert Park and likely even more so with the new cars and higher speeds around the course. As Lando Norris noted on Friday, it’s “pretty easy to make mistakes” in the 2022 cars and with cars potentially running closer together than ever before in Melbourne, all it takes is one poorly judged move or mistake to transform the race.

That brings Sergio Perez into play for Red Bull. If the fight at the front does indeed turn out to be between this season’s two race winners, then Perez could become a key weapon for his team. By running an alternate strategy to the Ferrari and his team mate, Red Bull could maximise their chances of benefiting from a sudden paradigm shift or simply making the most of Ferrari’s inability to cover off two different strategies at once with Sainz making his way through the field.

This could all become moot if Verstappen – or indeed Perez – has the raw race pace to just pass Leclerc on track and hold onto the lead. The world champion has been battling with the balance of his RB18 all weekend, but he appears confident that the car will be more consistent in its handling in a race situation.

“Normally in the race, the car stabilises a bit more, and it’s not so peaky, compared to finding the grip in qualifying,” said Verstappen. “So, it naturally should be a little bit better. And I think my long run yesterday look quite good in terms of how I felt. So hopefully, it will be the same tomorrow.”

Will Red Bull deny Leclerc a win as they did last time? Where will Sainz and Fernando Alonso ended up from the fifth row of the grid?

Share your views on the Australian Grand Prix in the comments.