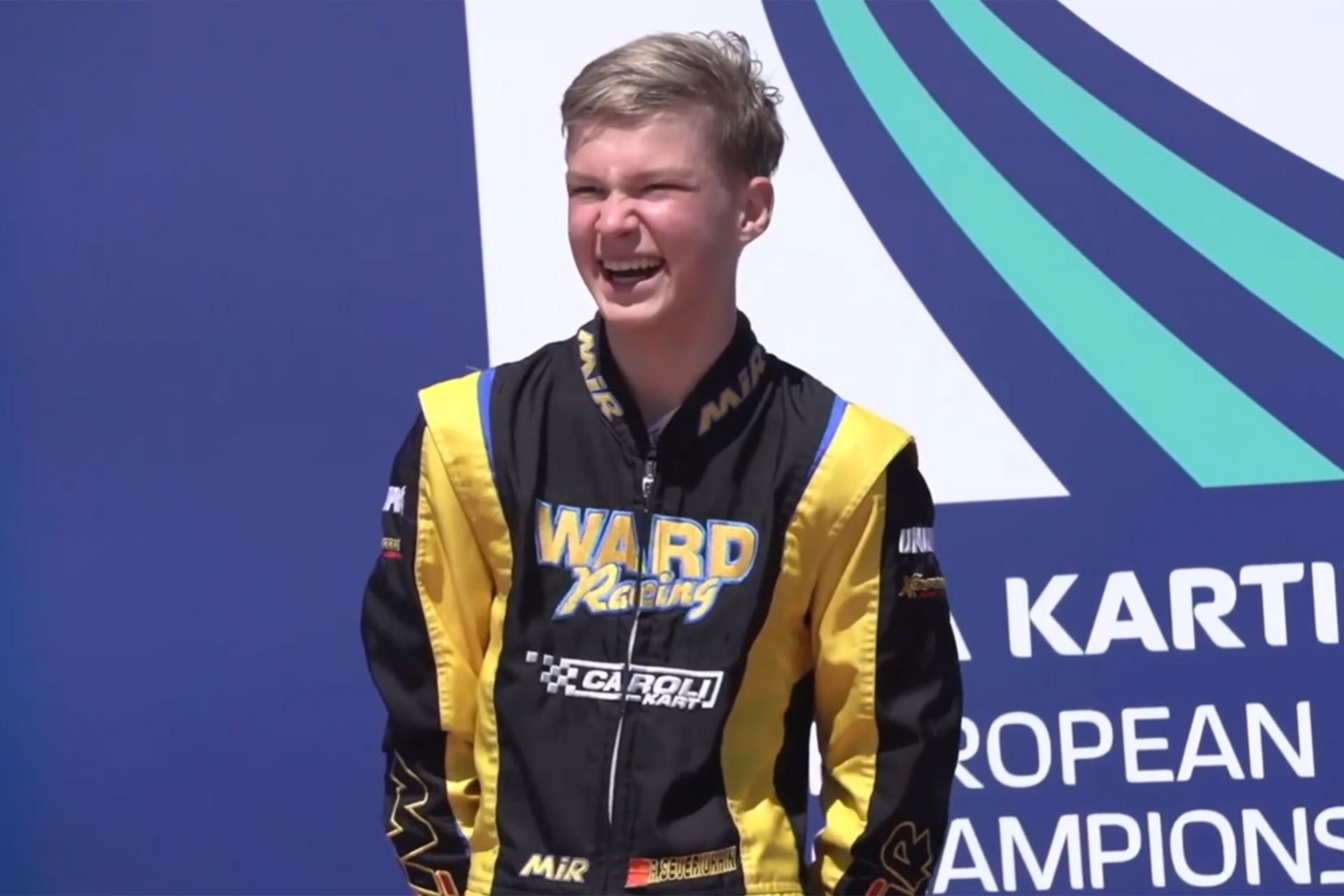 The FIA has begun an investigation into the actions of Russian karter Artem Severiukhin who appeared to perform a Nazi salute during yesterday’s FIA Karting European Championship event in Portimao.

Severiukhin won the opening round of the FIA Karting European Championship OK category on Sunday. Russian competitors are restricted from taking part in FIA events and Severiukhin was racing under the Italian flag.

During the performance of the Italian national anthem on the podium, Severiukhin struck his chest twice with his right hand, then extended his arm in front of him.

After footage of Severiukhin’s actions began to circulate on social media, the FIA issued a statement.

“The Federation Internationale de l’Automobile confirms that is has launched an immediate investigation into the [unacceptable] conduct of Mr Artem Severiukhin that occured during the podium ceremony for the OK category at round one of the 2022 FIA Karting European Championship at the Kartodromo Internacional do Algarve in Portugal,” it said.

“The FIA will communicate shortly on the further steps that will be taken in this case.”

Severiukhin’s team, Swedish outfit Ward Racing, said it condemned its driver’ actions “in the strongest possible terms” and said they will terminate his contract to race for them.

“The actions of Artem Severiukhin during the award ceremony on April 10th, 2022 were exclusively individual and do not represent the views and values of Ward Racing in any manner,” it said.

“On the contrary, Ward Racing stands with the international community condemning Russia’s invasion of Ukraine and expresses its solidarity with the people suffering because of this unprovoked and horrific attack.

“Since the start of the ongoing war, our firm stance has been demonstrated with “No War” helmets and stickers. In addition, we currently have three Ukrainian families traveling with us because they have no home to return to. As Swedish citizens, we are furthermore proud of our country which made the historical decision to send weapons to Ukraine for the fight against the Russian army.”

“Ward Racing accordingly condemns the personal actions of pilot Artem Severyukhin during the award ceremony on April 10th, 2022 in the strongest possible terms, as it considers them a manifestation of unsportsmanlike behaviour, an unacceptable violation of the ethical and moral sports codex. With this statement, Ward Racing expresses its opinion, as well as the opinion of all athletes and staff of the Ward Racing team. On the basis of these considerations, Ward Racing sees no possibility for continued cooperation with Artem Severyukhin and will proceed with terminating his racing contract.

“Finally, Ward Racing would like to apologize to those who were hurt or distressed by the occurrence.
It has long been and will remain a priority for Ward Racing to work for a more diverse, inclusive and respectful racing climate.”