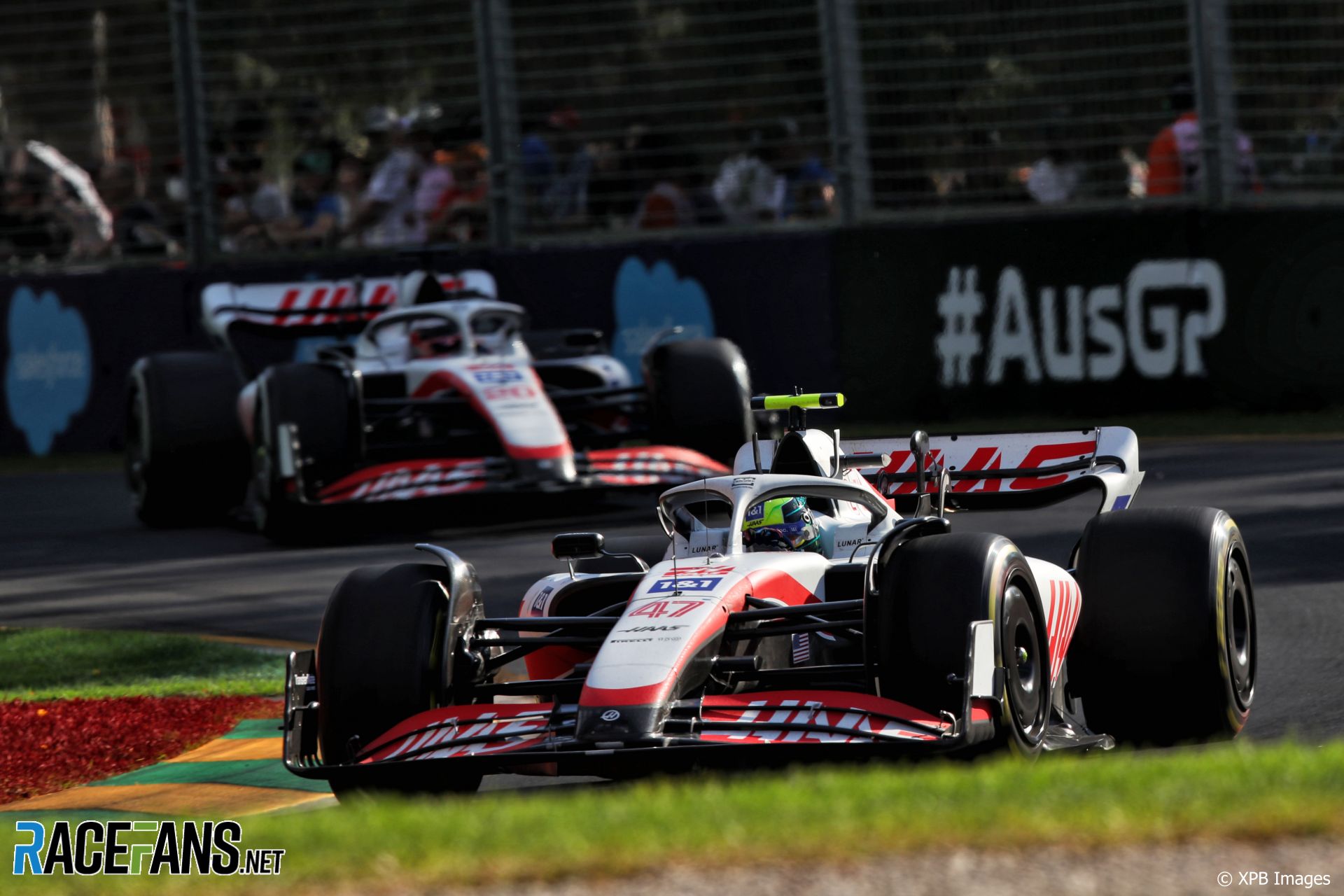 With 10 points for fifth place in the opening race of the 2022 season, Haas scored more points in one evening in Bahrain than they had over the 50 previous race weekends combined.

Not only did it vindicate the team’s decision to abandon development on their VF-21 before it had raced a single lap last season, and prioritise their 2022 car instead, it showed Haas could become regular points scorers in the midfield once again after three seasons in the doldrums.

But after Kevin Magnussen added two further points to the team’s tally in Saudi Arabia, Haas’ pace appeared to abandon them in Australia – with Magnussen and team mate Mick Schumacher qualifying only 17th and 15th, respectively, before finishing the race in 13th and 14th.

So what happened to the VF-22 in Melbourne that led to their pace over the first two night races seemingly evaporate under the Australian sun?

“Well, we’re still kind of working on trying to find answers for that,” Magnussen admitted after qualifying on Saturday. “But I think we just didn’t really nail the start set up for this track.”

Even as early as pre-season testing, teams had started to realise how the combination of radical ground effect aerodynamics and new 18-inch wheels had made the 2022 cars very sensitive to set up. On Friday – after Magnussen woke up ‘not feeling great’ – Haas completed a full practice programme and learned that they were having difficulty getting their car into that slim window of performance.

The major reworking of the Albert Park circuit saw average lap speeds jump by well over 10km/h since the last time Formula 1 visited the venue in 2019. The team quickly discovered that the track changes were more impactful than they had anticipated.

“It was a bit different to what we expected,” Magnussen explained. “We, I guess, expected it to be kind of similar to the old track, but it’s actually fairly different. And I just think we missed the starting set up and then had a pretty long way to go to get to a good spot with the car.”

Haas ended Friday ranked only 16th and 18th overall, the uneven balance more pronounced in low-fuel conditions than in race trim, fat with fuel. But after only an hour of additional practice, it wasn’t enough for Haas to get on top of their balance woes and a ‘messy’ qualifying session saw Magnussen eliminated in Q1 for the first time since his return, while Schumacher was last in Q2 after only just making the cut in the opening phase of the session.

“Qualifying was a mess with the red flag and all that just hit us in a bad spot and then I was out in Q1, so that’s a bummer,” Magnussen said, although optimistic the team could “move forward” during the race.

Schumacher too felt confident that their Sunday pace would prove better that what they had been able to produce on qualifying day.

“After a poor Friday we definitely managed to bring some pace back into the car,” said Schumacher who, like his team mate, was positive that the team could

The race started positively for Haas, with Schumacher moving up one place at the start before passing Carlos Sainz Jnr’s Ferrari as he struggled after a poor start on hard tyres, while Magnussen used the hards to good effect to pass Zhou Guanyu to move into 14th behind his team mate. But the balance problems that had affected the cars in practice and qualifying then began to reappear once more at the most crucial time of the weekend.

On lap 12, Schumacher ran wide on the exit of the fast chicane at turn 10, letting Magnussen through before Zhou followed on the exit of turn 11. Then, just a few laps later, Magnussen ran off the circuit into turn nine, cutting across the grass but managing to avoid Sainz’s gravelly fate, losing 13th to Zhou in the process.

After Magnussen eventually pitted for the mediums under the Max Verstappen-induced Virtual Safety Car, passing Nicholas Latifi and Yuki Tsunoda, while Schumacher was overtaken by Fernando Alonso’s Alpine, leaving Zhou now sandwiched between the two Haas.

As they reached lap 50, Alonso’s mediums had grained to the extent that Schumacher was tucked up behind the slowing Alpine. But after a half-hearted look on the run to turn one, Schumacher locked up and ran wide, allowing Zhou through for a second time in the race, before Magnussen nipped past on the way to turn three. Eventually Magnussen’s own mediums began fading, allowing Schumacher to slipstream his team mate on the run to turn three on lap 56 and through, Magnussen not holding up his younger team mate.

After the team had missed the mark both in the garage and on the track over the weekend, team principal Guenther Steiner was fairly magnanimous about his team’s fortunes over the three days.

“It didn’t work out as we planned,” Steiner said. “The car was strong and the drivers did a good job, so we know if we qualify better we can score points, and that is what we keep on trying to do.

“As I always say, this year we’ve got a car that can score points, we’ve just had a difficult weekend. It’s one of three which was difficult, here we go again in Imola.”

Schumacher was less sure about the root causes of the team’s lack of pace, but confident they would get to the bottom of the matter before the next race.

For Magnussen, the conclusions to draw appeared to be clear. The Australian Grand Prix weekend showed how sensitive these new 2022 ground effect cars are to set up and unlocking tyre performance. Fail to get either in the right range early on and a difficult race weekend will await you. An important lesson to learn, given that there will be only one practice session before qualifying next weekend in Imola – the first sprint weekend of the season.

“In Jeddah, the car we put on track was good, we were in the right window with the car for that track and I just had to kind of get up to speed,” Magnussen explained. “We didn’t really need to do any big changes to the car.

“Whereas this weekend it’s been a different story. We haven’t started in the same way as we did in Bahrain and Jeddah. I think with the field this year, if you miss your window a little bit, you’ll see it very visibly in the standings because it’s closer this year. So I’m not panicking.”