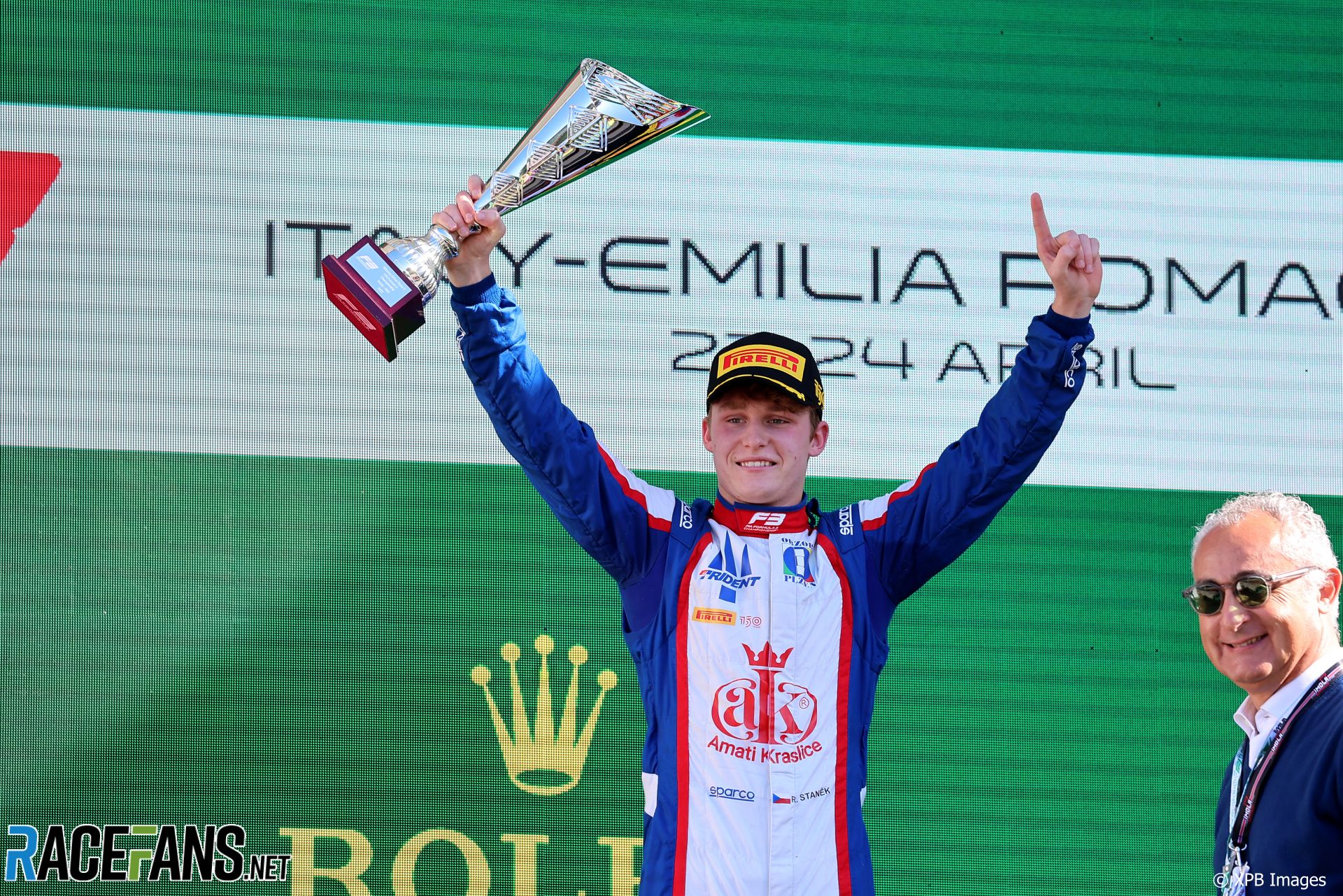 After overnight rain, drivers gambled whether to start the race on slick tyres or opt for full wets, F3 having no intermediate option. Pole-winner Zane Maloney and second-placed Stanek both opted to start on slicks, while Caio Collet, Franco Colapinto, Hunter Yeany, Reece Ushijima, Josep Maria Marti and Enzo Trulli took the option of wet tyres on the still very damp track.

Maloney initially held the lead at the start but drivers on slicks were reluctant to venture beyond the drying groove. Collet and Colapinto on their wets quickly rose from ninth and 12th, the former grabbing the lead halfway around the opening lap.

Their progress was halted after Ushijima and Brad Benavides came together at Villeneuve, Ushijima’s race over but Benavides able to continue. Francesco Pizzi also found himself beached in gravel after losing grip through the second part of Tamburello, the combined incidents bringing out a safety car on lap three.

Collet and Colapinto pitted for slicks during the safety car, putting them to the back of the pack. F3 crews are seldom called upon to make tyre changes during races, and swapping tyres is a lengthier process than in F2 or F1.

At the restart on lap five, Josep Maria Marti and Hunter Yeany still had wet tyres on their Campos cars, letting them hunt their way forwards against the drivers still struggling for grip. Marti was able to move up from fourth to take the lead, passing Oliver Bearman, Stanek and Maloney easily and Yeany following behind him, up to third from fifth by lap six.

Franco Colapinto, already down in 21st following his pit stop, was issued a 10-second stop-go penalty for being out of position behind the safety car line on the formation lap.

By lap seven, cars on wet tyres were losing their advantage and Maloney reclaimed the lead from Marti, the two Campos drivers fading quickly. Marti and Yeany pitted under the safety car after Benavides ended his race in the wall with rear damage. He was also issued a 10-second stop-and-go penalty for the earlier incident with Ushijima.

Maloney led the field when safety car pitted but disastrously spun on the entry to Rivazza, handing the lead to Stanek. The new leader was immediately overtaken by Bearman into Tamburello after going side-by-side down the pit straight.

A full safety car was called, to retrieve Maloney’s car, with Bearman in the lead on lap 12. Racing resumed at the start of lap 14, Bearman getting away cleanly followed by Stanek and Jak Crawford. Stanek was able to stay within a second and a half of Bearman, who instantly set the fastest lap of the race so far but Crawford dropped more than two and a half seconds back by lap 15, backing up the pack.

Bearman set a new fastest lap every time around from the restart to lap 18, when Stanek found enough speed to cut Bearman’s lead to half a second. Bearman was barely holding on to the lead, Stanek right on his rear as they went through Acque Minerali on lap 22 and Stanek managed to get alongside and then pass on the pit straight, despite DRS not having been enabled.

Behind them, Isack Hadjar and Gregoire Saucy were battling for fourth, allowing Leclerc to make more gains on them. Seventh-placed Kush Maini was a safe two seconds back from them but

Bearman attempted to hold on to second but with very little left to fight with, was passed by Crawford in almost the same place as he had been by Stanek, forced back to third place at the start of the final lap. Behind him, Saucy was too distracted by his own tyre woes and the challenge from Hadjar to take advantage until the first Rivazza when he made an attempt to pass, colliding with Bearman and spinning out of any contention.

Hadjar was able to profit from the chaos to take third, Bearman fourth with a likely penalty for the contact. Stanek comfortably crossed the line in the lead with Crawford behind him.

Victor Martins retains the lead of the championship, Stanek’s win claiming him second place in the standings and Crawford taking third.