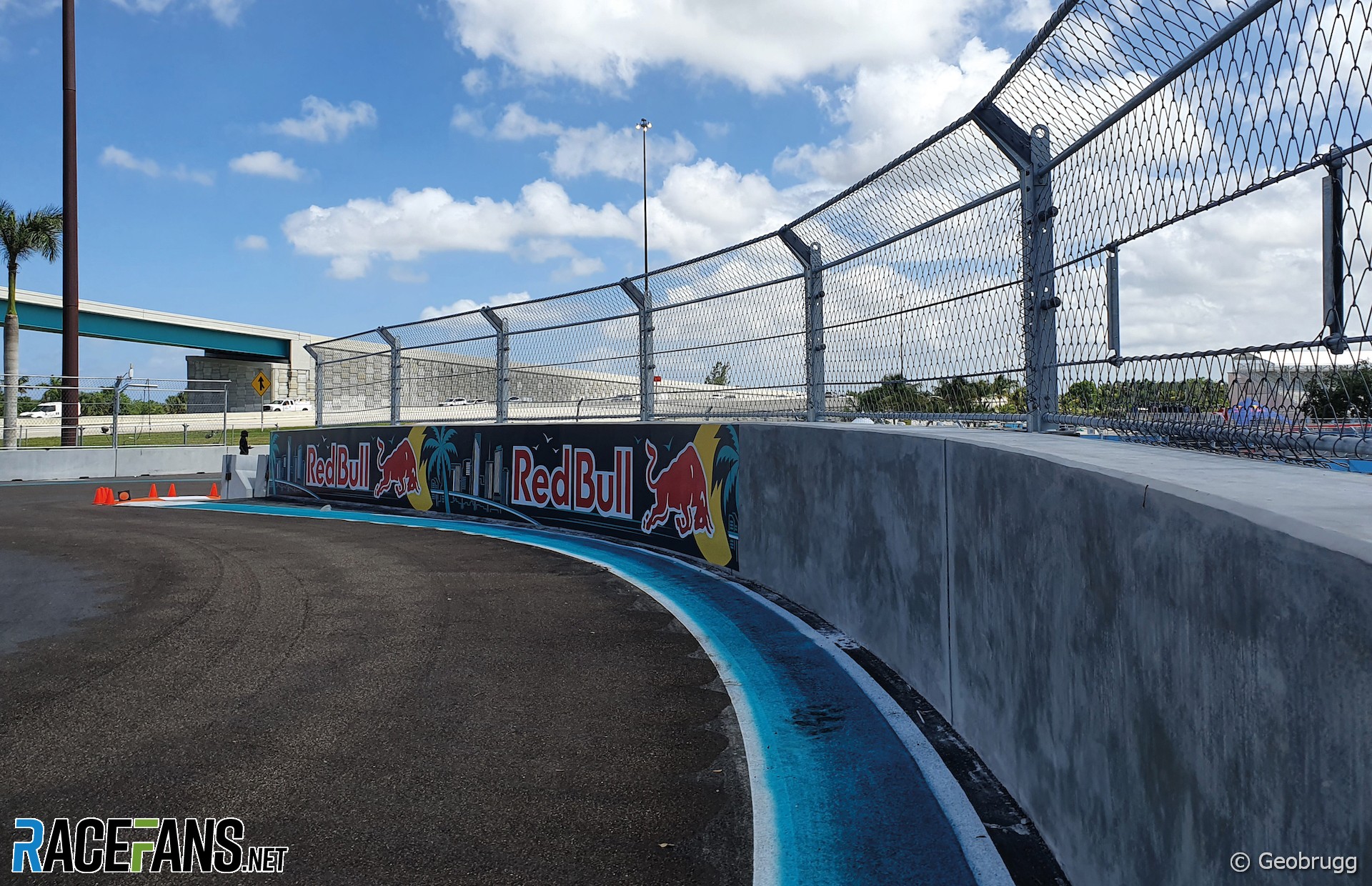 In the round-up: The Miami International Autodrome constructors say the sequence between turns 13 and 16 is designed to create overtaking opportunities through driver error.

“Jekyll and Hyde” Miami track will force errors from drivers

Clive Bowen, the founder and director of Apex Circuit Design, the team behind the Miami Grand Prix track, explained how they intend to challenge drivers throughout the 5.4-kilometre lap.

“We had to ensure that we had a race track that had enough of a ‘Jekyll and Hyde’ personality,” said Bowen. This included “sections with [gradient] change and a lot of traction which require a soft set-up on a car, then some super high-speed sections where you want to have a stiff setup to get the best from aero performance and therefore lateral grip through the corners.”

The positioning of some barriers has been configured to provoke mistakes from drivers, he added. “The sequence from turn 13 through to 16 is where we thread the needle under the turnpike overpasses,” said Bowen. “Going into turn 14, you don’t see the apex of turn 15 until you’re on the apex of turn 14. It’s what we call a ‘mistake generator’ so the opportunity for drivers to gain position because somebody in front overdrives is quite high.”

Downforce levels will be hardest setup item to choose – Perez

Sergio Perez said he believes the biggest challenge for teams this weekend will be choosing what level of downforce to run on the unfamiliar Miami track.

“I found the new circuit fun on the simulator and it can potentially be a good place for racing with those very long straights,” Perez said. “I think choosing the right downforce level will be the biggest challenge for all the teams.”

He welcomed F1’s addition of a second race in the USA this year. “It is great that the calendar is expanding more in America, which is a lot closer to home for me and one day I might end up living there,” added the native of Guadalajara, Mexico. “It is a great market for Formula 1 and I am sure there will be a lot of Latin Americans and Mexicans at the race, so hopefully I get a lot of support and it will be a very important race for the team both on and off the track.”

Crypto.com will use trackside sensors to gather data on the speed and sound of F1 cars during the Miami Grand Prix weekend, which will be used to make visualisations. The visualisations will be displayed in an on-site gallery, where fans can enter a draw to win one of 57 minted into NFTs, awarded the following week.

Alfa Romeo performance “not a fluke”

Alfa Romeo team principal Frédéric Vasseur says the team is determined to continue its strong results from opening races. Valtteri Bottas scored the team’s best finish of the season so far with fifth place at the last race in Imola.

“We approach this race in a strong position and with a confident mood,” said Vasseur. “We showed in Imola, where we fought for the highest positions, that our form from the beginning of the season was not a fluke.”

Alfa Romeo lies fifth in the constructors championship after the first four races. “We are actually improving with every round, and we are in a situation in which we can reap the rewards of our work, but we cannot get carried away,” Vasseur continued. “The whole field is still very compressed and a minor swing in performance, be it track-related or due to upgrades, can mean the balance can shift significantly.

“That’s why we have to keep working hard to extract everything from our package: we know we can score big in every race, but execution needs to be flawless if we want to beat our rivals.”

Tom Brady, Marcus Allen and Lewis Hamilton are golfing together today at an event at Miami Beach pic.twitter.com/dO0tvAz648

Our new grandstand is now officially open ! What a view ! pic.twitter.com/NlOOeJofsV

Formula 1: Mercedes boss Toto Wolff wants China to be like US, host 3 races in a season (South China Morning Post)

'I’d like to not only race in Shanghai, I’d also like to race in Beijing,' he told Xinhua. 'It’s a fantastic market for us as Mercedes, and I believe we should be embedded there with a strong footprint.'

Miami hosts its first F1 Grand Prix this weekend, and thousands of fans are spending a ton just to be in town (CNBC)

The crowds and spending are expected to surpass Miami’s 2020 Super Bowl and its annual Art Basel festival, according to local officials. Miami’s top hotels are charging more than $100,0000 a night for their top suites. Chefs are offering special dinners for $3,000 a plate, and night clubs are bringing in top DJs with tables going for up to $100,000 a night.

Liberty Media CEO on F1 growth: ‘We have a lot of demand’ (Associated Press)

Andretti: 'It fell apart because all of a sudden they changed the terms and they wanted to control everything. They wanted veto power on every decision. They changed that two days before the deal was supposed to be signed.'

By scoring eight points, Lucas scored his 920th in Formula E to date while the result also marked the team’s 40th point scored in Monaco. Venturi now sits a mere four points shy of 600 all-time points while, with 86 points on the board from the first six races this season, the team has also scored twice as many points as it did at this stage in Season 7.

Formula E Photographer Louise Johnson: 'I was dreaming that I could be a motorsport photographer' (Females in Motorsport)

Johnson: 'On a race weekend, I often don’t have longer than a couple of minutes to edit a single picture, so it’s about working quickly and instinctively most of the time, especially in between sessions when there is very limited time to edit and deliver images to clients before the next session starts.'

With seemingly wall-to-wall positive response to Miami from within teams, GT Racer raises that it would take a very significant incident for F1 drivers to break ranks on anything to do with the race, as happened in Jeddah:

You won’t hear much criticism of the venue over the weekend as drivers and media have been told to push a positive impression of the circuit.

It’s getting rarer and rarer that you actually get to hear the actual options of those around F1 now. Was a big part of what made what drivers did back on the Friday night in Saudi Arabia rather surprising. They actually half made their actual views public although did very quickly get back on script.
@GT-racer