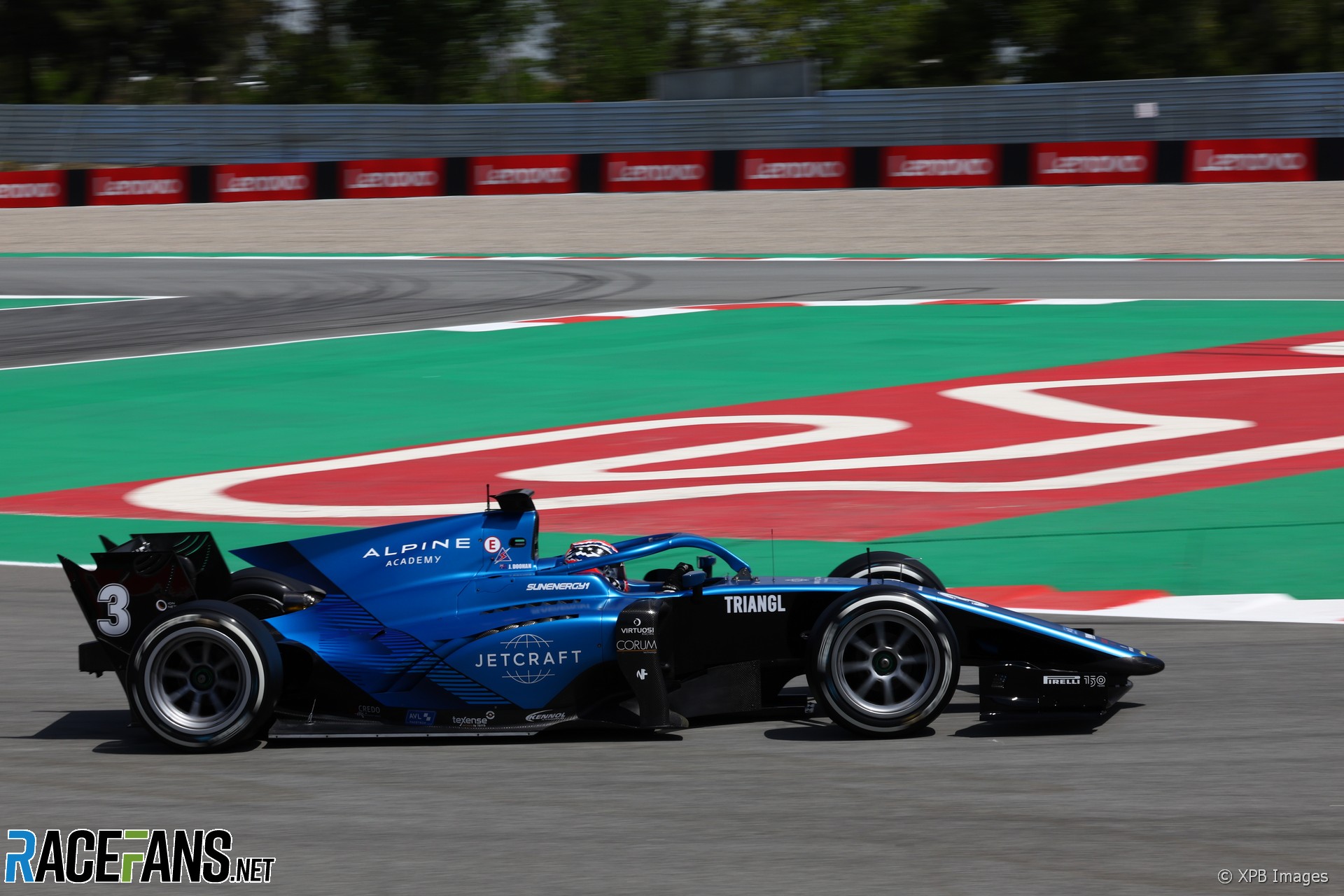 Jack Doohan has taken Formula 2 pole in a tactical qualifying session where drivers attempted to predict when grip levels would be at their highest.

Felipe Drugovich had been fastest during the F2 practice session, which was disrupted by two red flags following a crash at turn nine for Olli Caldwell and Marcus Armstrong’s car needing to be retrieved after he spun on – and then off – the track.

In qualifying, Liam Lawson, Logan Sargeant and Theo Pourchaire were the first to set times, each improving on the one before for Pourchaire to set a 1’30.083. Marino Sato and Jehan Daruvala then further improved, both into the 1’29s with Daruvala putting together a 1’29.512.

Clement Novalak set the second-fastest time. However, puzzlingly, his MP Motorsport team mate Drugovich remained in the pits, without having set a lap, with 22 minutes left in the session.

Drugovich still did not go out and was one of four drivers with no time set after ten minutes had elapsed in the session. Jack Doohan, Richard Verschoor and Marcus Armstrong also had not set lap time by this stage.

With Formula 2’s qualifying rules forbidding cars from being refuelled during a session, waiting until track grip has evolved to its highest level is a valid strategy. Doohan and Drugovich went out at the halfway point of the session to set very competitive times, Doohan topping the board momentarily with a 1’29.147 and Drugovich just behind him.

However, Daruvala reclaimed his place at the top almost immediately with a 1’28.884, the first driver to dip below a 1’29 lap time. Daruvala then got out of his car to speak to engineers on the Prema pit wall, his run seemingly now finished.

Many drivers went for final runs with five minutes remaining, Doohan improving on his previous time and looking potentially in contention for pole. A tow in the final sector saw him improve to a 1’28.612, only for Frederick Vesti to follow him over the line and demote Daruvala to third-fastest.

Theo Pourchaire encountered Drugovich at the start of another fast lap, breaking his run and leading Pourchaire to say “he’s impeded me, he’s impeded me” on the radio. Another messy moment was Ayumu Iwasa hitting a queue of cars returning to the pit at the tight final sector the end of his final flying lap, having been only a tenth off pole prior to that point.

Following his free practice run with Red Bull Formula 1 in the afternoon, Jüri Vips set almost the fastest lap of the session, having been 21st in the times until the chequered flag. He snatched second place from Vesti, just 0.023s from Doohan’s time, securing the Vertuosi driver pole position.

Doohan’s pole is his second of the season, after also topping the times in Bahrain at the opening round. Drugovich takes the consolation prize of partially-reversed grid pole for the sprint race, having qualified tenth.