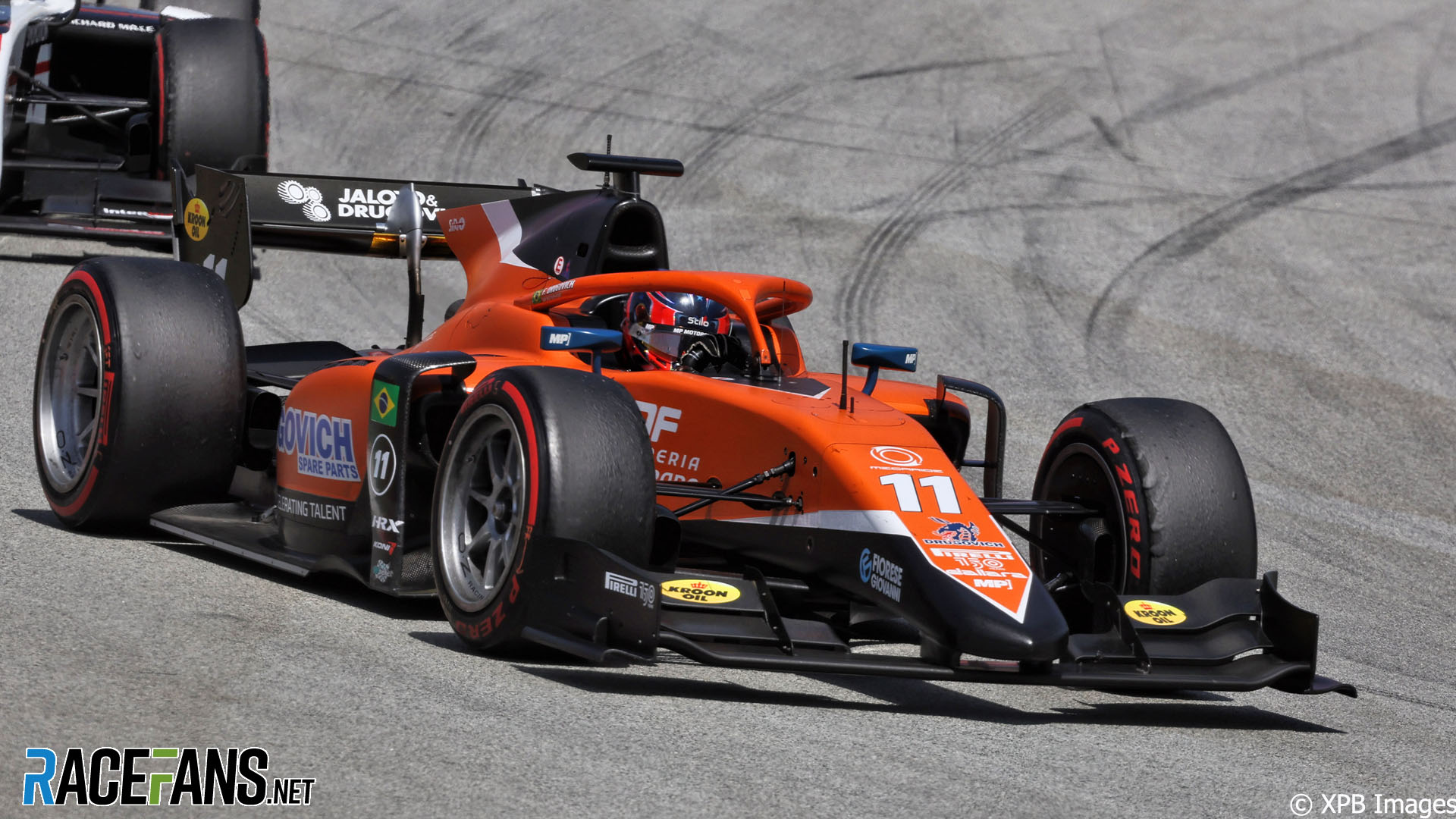 Felipe Drugovich has taken a clean sweep of Barcelona Formula 2 wins after a feature race victory from tenth on the grid to extend his championship lead.

Jack Doohan had taken pole position, Jüri Vips alongside him on the front row and with Vesti and Jehan Daruvala on the second row. Drugovich, who had struggled in qualifying, started tenth.

Doohan got away with the lead off the line, covering Vips and allowing Vesti to get past into the lead up to turn one, forcing Vips down to third. Logan Sargeant passed Daruvala into turn one but with Daruvala running the alternate strategy, having started on harder tyres.

On lap three, Olli Caldwell and Dennis Hauger made contact after Hauger attempted to pass Caldwell around the outside of turn 14, clipping the Campos’ front wing.

On the fourth lap, Daruvala’s Prema suddenly slowed on the exit of turn five, leaving Ayumu Iwasa with nowhere to go to avoid clipping the back of Daruvala’s car with his own front wing. As Iwasa pitted for repairs, the Safety Car was deployed due to Daruvala’s car being left strange in the middle of turn seven.

Hauger also pitted behind the Safety Car for a new front wing, following the contact with Caldwell, for which Hauger was given a five-second time penalty.

The Safety Car came in on lap six, Doohan moving away in the lead while Felipe Drugovich challenged Sargeant for fourth into turn one. Drugovich was repelled but stayed on the back of Sargeant throughout the lap.

Jüri Vips was the first driver to make a scheduled compulsory pit stop, at the start of lap eight, Jake Hughes following him into the pits. Hughes led the Hitech out, however, after a slow pit stop for Vips that saw his race unravel from then on, a lengthy hard tyre stint ahead of him.

Drugovich stayed out in the lead. Doohan, Vesti and Sargeant had pitted and Drugovich, in clean air, was able to extend a nearly 30-second lead over Doohan by lap 14.

Hauger, who had pitted early following the contact with Caldwell, ran wide at turn eight on lap 16 and through the gravel, ruining the hard tyres he had switched to.

“Yeah, now the tyres are going” said Drugovich, on lap 16, finally being called into the pits by his MP Motorsport team. However, Drugovich stayed out for a further lap before eventually coming in for hard tyres. Drugovich’s stop was relatively slow, putting him back out in ninth place – a net third, behind Doohan and Vesti.

Doohan and Drugovich were able to start moving up the order of drivers on the alternative strategy on lap 20, with Drugovich also passing Vesti as he swept past Hauger on the main straight.

Clement Novalak pitted on lap 24, giving Doohan the true race lead but Marcus Armstrong stayed out, keeping Drugovich back from Doohan. Drugovich passed the Hitech driver – who was attempting to extend a hard tyre stint – at the start of lap 24.

Closing in on Doohan with five-lap fresher tyres, Drugovich finally took the lead through turn one on lap 27. The MP pit wall instructed him to push and draw out at least a five-second gap on Doohan, already two seconds behind, on lap 29 – presumably out of concern for the investigation into his pit stop. By lap 32 Drugovich had extended his lead by more than four seconds, Vesti over six seconds back from the leaders in third.

Novalak was hunting down Calan Williams on lap 33, passing him easily along the main straight for seventh. The other MP driver was able to continue up the order, passing Pourchaire for fifth on lap 35. Enzo Fittipaldi followed him through, pushing Pourchaire down to seventh and into the clutches of Armstrong.

Drugovich had a 5.3 second lead on the final lap, coming across the line with more than half a second in hand to Doohan, even if he did receive a five-second penalty, Vesti following to complete the podium. Novalak, meanwhile, had closed a five second gap to Sargeant to just three tenths at the chequered flag, Sargeant narrowly keeping fourth.

The result extends Drugovich’s championship lead to a healthy 26 points ahead of Theo Pourchaire, as Formula 2 heads to Monaco next weekend.