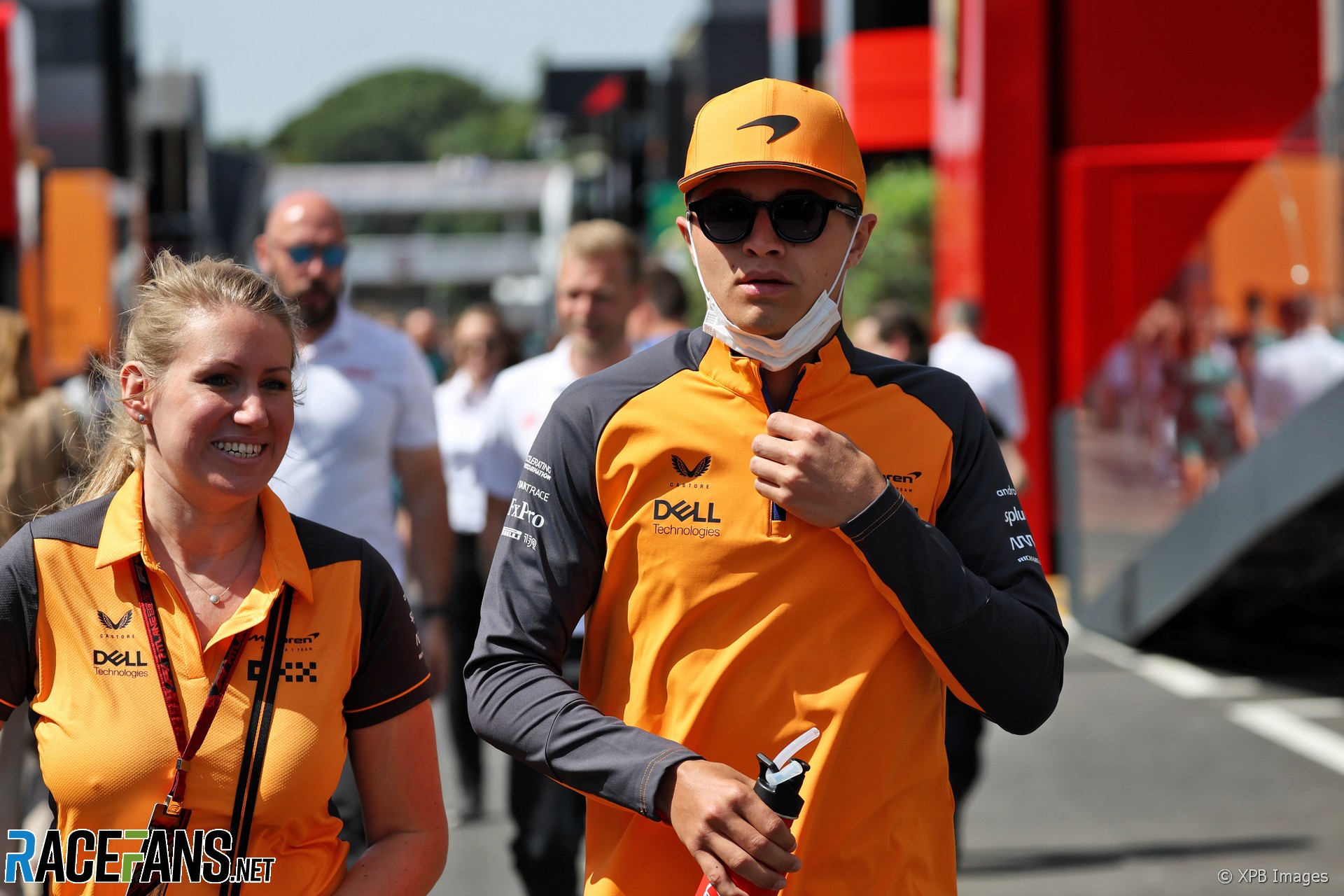 In the round-up: Lando Norris revealed he was unwell during qualifying for the Spanish Grand Prix where he almost reached Q3.

Norris pleased to almost reach Q3 despite “suffering” with illness

Norris finished Q2 in 10th place and originally progressed through to the final phase, until his best time was deleted by the stewards for narrowly exceeding track limits on the exit of turn 12.

Asked by RaceFans if he was physically feeling well due to his visible discomfort after the session, Norris said “I’ve been much better. I’ve not been great all weekend, to be honest with you.

“I’m just suffering with my throat and my eyes and seeing, which doesn’t help,” he continued. “My sleep and everything – energy levels are probably the worst I’ve had in a long time. So definitely not at my peak this weekend.

“But I was so happy even to be into Q3 and to do the lap I did with how this weekend’s gone so far. I was quite surprised by it, it does make me feel good.”

Caio Collet, who finished third in the Barcelona Formula 3 sprint race, said that although he did not hesitate to pass Juan-Manuel Correa, he did regret having to take a possible podium finish from the American driver.

Correa recovered from life-threatening injuries sustained in the Formula 2 crash that took Anthoine Hubert’s life at Spa in 2019, returning to racing last season in Formula 3.

“He’s one of the guys that I don’t want to take the podium away from,” Collet said. “He deserves it quite a lot. And when I saw him, I felt it was bad, but I knew I had to go for it.”

Abbi Pulling overtook Alice Powell at the very start of the Barcelona W Series race and then fought to keep the more experienced driver behind her.

Pulling is a protege of Powell, who coached her during her time in British F4, with the pair also sharing a flat together. She is an Alpine Academy affiliate driver, with Powell now also holding a role as a talent identifier and coach to the junior driver programme.

“I really appreciate everything that Alice has done for me,” Pulling said. “If it wasn’t for Alice I wouldn’t be in a lot of places. She introduced me to Alpine and got me that connection with them.

“So I’m almost indebted to what she’s done to my career. We’ve got so much respect for each other on track. As much as we’re racing each other and we’ll probably discuss this when we’re home – she’ll be like ‘if you didn’t get past me at the start,’ this and that and I’ll say the same and we’ll go back and forth with it forever. It’s a nice kind of dynamic that we have. It’s quite unique and I really enjoy it.”

I had a need for speed 🏎💨 Good Luck tomorrow @LewisHamilton @GeorgeRussell63 @MercedesAMGF1 pic.twitter.com/EZLcjmewoK

🇪🇸 P3. Struggling a bit with the rear, but feeling positive because the upgrades seem to work well. Thank you to the mechanics for changing the chassis overnight and to every fan, the track was packed! We'll try to fight for the win tomorrow!

P8 on the startgrid tomorrow! I struggled with a failing DRS system during the whole qualifying session, so it could have been even better. But it's great and promising that we have the speed – and awesome for the @HaasF1Team to have both cars in top 10 👏🏻 #HaasF1 #F1 pic.twitter.com/axO6Bs950i

As the teams develop their cars, resolve problems & seconds of deficit become tenths, then hundredths, the performance converges. The top drivers then come into play in squeezing those margins. #F1

A surprise birthday cake for @jamiechadwick from the team today 😁

I still can't believe @rinusveekay put down a four-lap average that was only beaten by turbo V8 cars from an open-chassis, open-tyre category from 26 years ago. #Indy500

Out of neutral, F1 drivers shift debate as well as gears (Reuters)

"Formula 1's modern drivers have accelerated away from the stereotype speed merchant and are finding strength in discussing subjects the high-octane sport has previously often found uncomfortable."

"Roger Federer took a high-octane break from the practice court in Barcelona on Saturday as the Swiss legend caught up with Formula 1 great Lewis Hamilton at the Spanish Grand Prix."

"(The heat) was terrible. I'm driving down the straight, DRS open, going up the gears and I had a bit of sweat come down my face. I was so itchy, I needed to scratch it off but I just had to keep going."

Brian Roberts’ One That Got Away (Puck)

"In recent years, as media companies have taken greater interest in the rapidly-growing gaming industry, Wilson and Electronic Arts have held talks with a number of different potential suitors, including Disney, Apple and Amazon, sources with knowledge of those talks told me. Several sources familiar with these talks say EA has been persistent in pursuing a sale, and has only grown more emboldened in the wake of the Microsoft-Activision deal."

"Actor and self-proclaimed Formula One nerd Jeremy Irvine assumes hosting duties for Episode 8 of The Williams Warm-Up, brought to you from the Circuit de Barcelona-Catalunya in Spain."

With George Russell’s top speed in qualifying leading some to suggest that low downforce set ups are now the ‘meta’, @srga91 isn’t so sure it’s the best way to go around the Catalunya circuit…

This might be the case for medium downforce tracks with a mix of high and low speed corners, but without medium speed corners, like in Jeddah or Miami.

As for Barcelona, I doubt low downforce is a good option there, because you risk sliding too much in S3 and thus overheating the surface of your rear tyres over longer runs.

Ferrari tried a lower downforce setup in FP2 and that resulted in very high tyre degredation.

Lower downforce might be a good choice for Baku & Montreal or possibly even Silverstone.
@srga91

Happy birthday to Travis and Cristian!