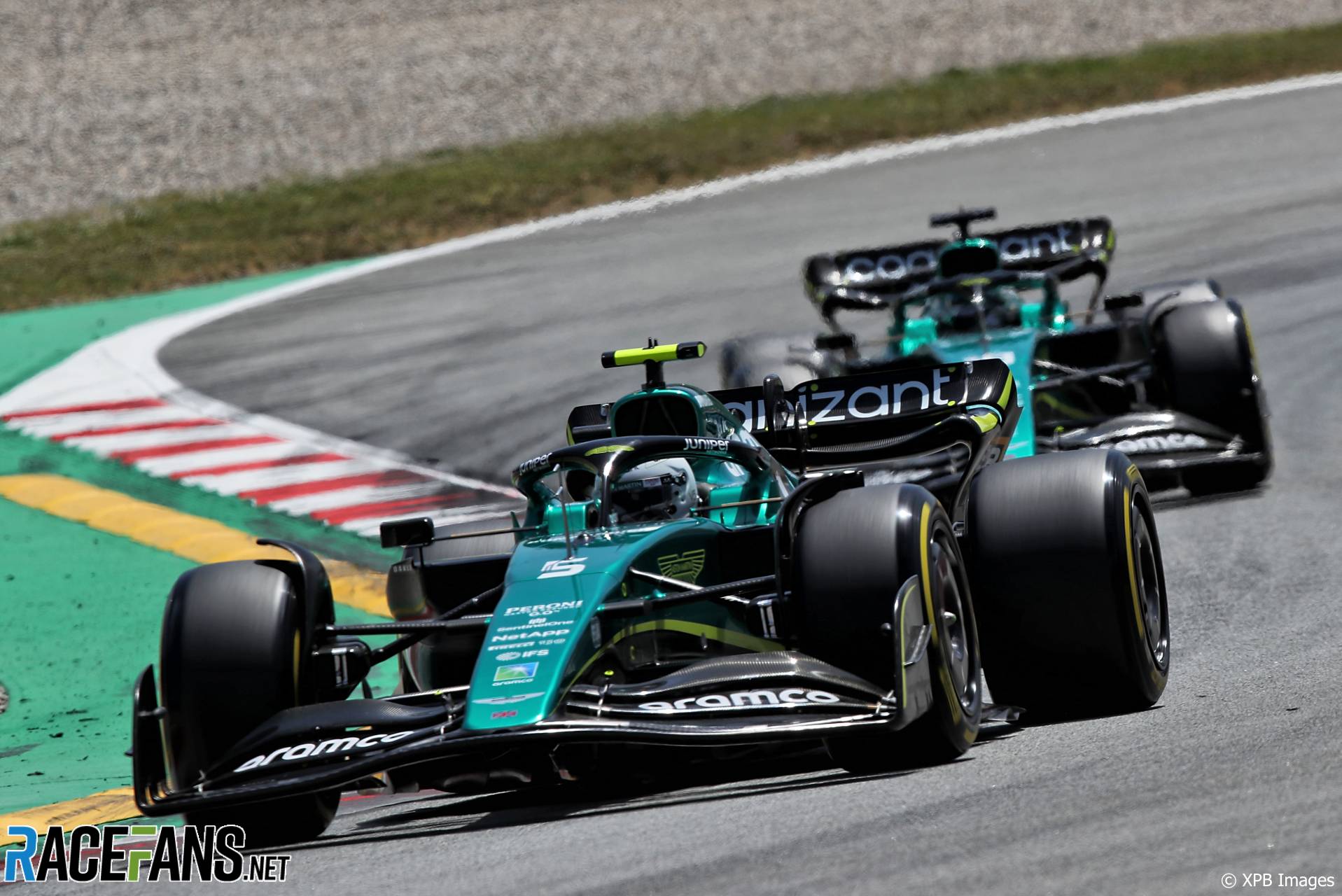 In the round-up: Sebastian Vettel says that Aston Martin will stick with their new car concept despite failing to score in the Spanish Grand Prix.

After introducing a new car concept in Barcelona there was no points reward for Aston Martin, Sebastian Vettel finishing in 11th and Lance Stroll in 15th place.

However, Vettel said that despite that the team believe the revamped car offers greater development potential than its predecessor.

“We know that there’s still a lot of work to do with this with this new package,” he said. “And we know that it’s not going to be a massive step forward straight away. But we believe it’s the better direction in the future.”

“I think for everybody [in the race] the car felt poor because it was so hot, so slippery with the tyres,” Vettel continued. “We were going so slow, if you look at the lap times. We were doing like Formula 2 qualifying pace in the race. But we managed well I think and managed the tyres better than most people.”

Fernando Alonso exited qualifying for the Spanish Grand Prix in Q1, after hitting traffic during his final run. Alonso had believed he needed to get over the line quicker to not face the chequered flag, which turned out not to be the case.

Alpine team principal Otmar Szafnauer said that the team would revise the way they communicated track position to Alonso. “In the future, we’ll tell him how much time he has because we know on the pit wall at different areas of the track.

“So he knows exactly because he thought he had two seconds when he had 16. So it’s a big difference.”

Szafnaur said that it wasn’t a case that Alonso had misinterpreted Alpine’s relay of data, simply that he hadn’t asked for clarification. “I don’t think he got the message.

“But also communication is a two-way street. He could have asked as too, ‘how much time do we have?’ and he didn’t.

“So now as a default we in those situations, we will tell him three or four times on track. So he knows and we’re telling him. It’s easy to fix.”

Monaco bumps will be aerodynamic challenge for 2020 cars

Williams’ head of vehicle performance, Dave Robson, has said that Monaco’s bumpy surface will demand an aerodynamic compromise, in the ground-effect cars.

“Monaco is always a challenging circuit that requires a specific approach to setup and car management,” Robson explained. “With the new 2022 cars, this is going to be an even greater challenge as it will be necessary to move the car away from the aerodynamic optimum in order to be able to deal with the bumps and kerbs of the Monte Carlo streets.

“Apart from some additional brake cooling and steering options, we have no test items or upgrades for this event and so we will be free to spend the practice sessions exploring the car setup and helping the drivers to get maximum confidence in the car.”

Sim at @NISMO for Jakarta 🇮🇩 @FIAFormulaE
The track is a good one.
Prep day getting all the settings and systems in line. 🫡 pic.twitter.com/jJDxme7cNO

Vesti's guest column: qualifying pace is back but still more to come (Formula 2)

I can do qualifying – I haven’t lost it! I need to work really hard to understand F2, the tyres, what I need to do in order to produce a good qualifying because it’s just so much easier to do a good weekend if you start at the front of the grid, no doubt.

Formula E co-found Alberto Longo in interview: Berlin is a matter of course for us (E-formel.de - German)

Longo: 'The Vancouver race track is owned by various owners. One of them didn't sign the contract in time to get approval from the city. By the time we were asked to find a solution to this situation, it was already too late.'

Lining up on the front row of the grid for the third time in seven races, Edo secures the perfect launch to lead into turn one. By posting a 1'13.890 lap, he opens an early lead over Sims by 0.890 seconds before setting into a rhythm and meeting energy targets.

"Leading sports car team Valour Racing has confirmed it will join the GB4 Championship with a two-car entry from this weekend's (28/29 May) Donington Park rounds onwards, as the Northamptonshire squad expands into single-seater competition for the first time."

It’s odd to think Max has now won more races (24) than his somewhat-father-in-law Piquet with 23. Yet, Nelson has three world championships. This whole having almost twice as many races does skew figures, Fangio won five world titles, more than Senna, Prost… well everyone apart from Lewis and Michael. But isn’t in the top grand prix winners list.

I don’t think it’s a problem, Fangio’s achievements aren’t going to be forgotten. But someone new to the sport might assume Nelson Piquet must have been quite good at coming second a lot.
@bernasaurus