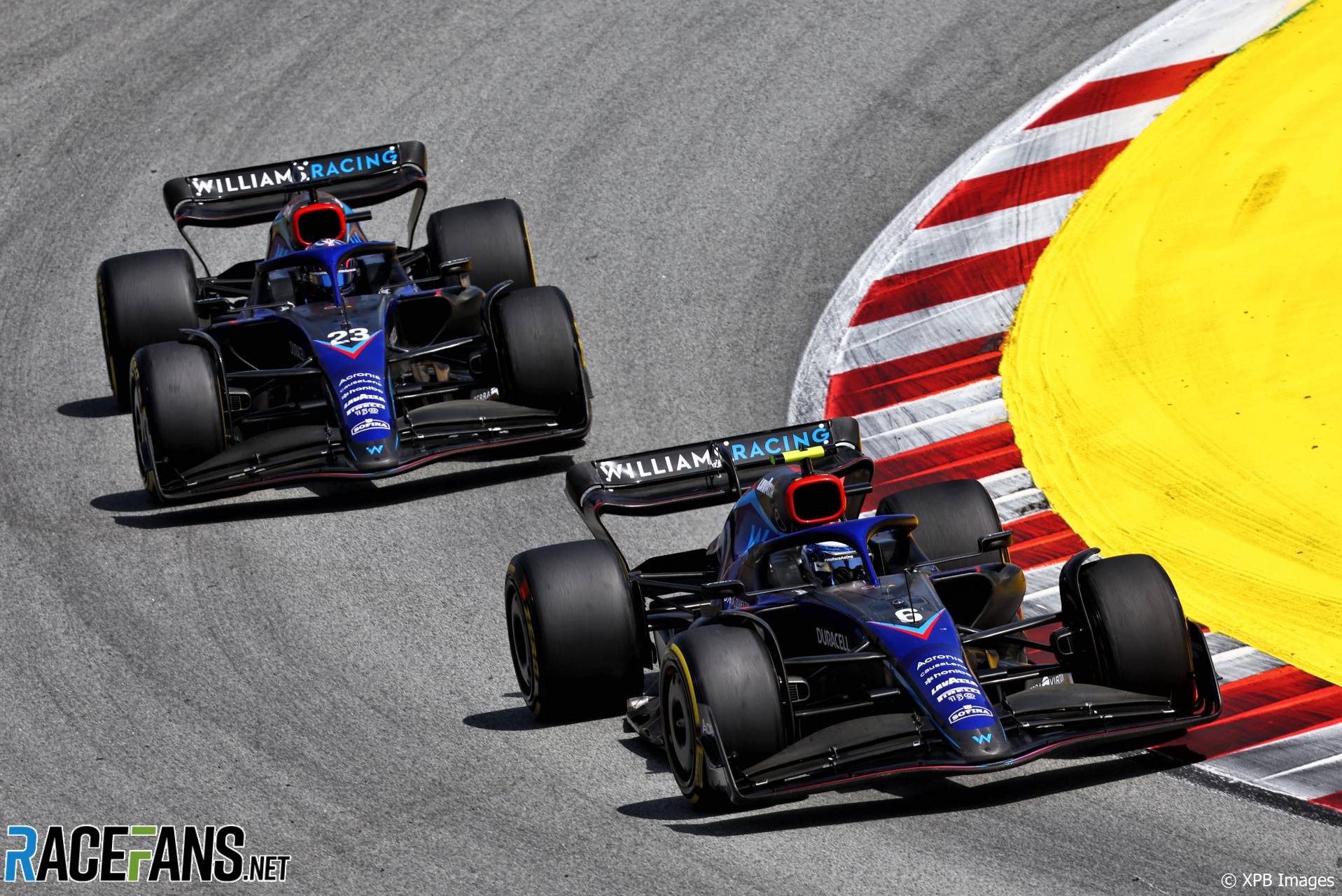 In the round-up: Nicholas Latifi says last weekend’s race in Spain shows Williams have a fundamental lack of downforce compared to their rivals.

The first day of practice at the Spanish Grand Prix was “the worst Friday we’ve had in three years”, said Latifi.

“This track just relies so much on maximum downforce, so although the balance is not perfect, this track has exposed we’re just missing so much,” he explained.

While his team mate Alexander Albon has delivered some points finishes for the team this year, the Circuit de Catalunya proved their weakest track so far.

“This track is the reference track for everyone,” said Latifi, “you just put the downforce you have. And we’re still one of the quickest on the straights by far – so that shows we need a bit more – and we’re very, very slow in the corners, especially the high speed, compared to everyone else.

“It just makes managing the tyres so much more difficult. You’re just constantly sliding around. So it definitely gives, I think, some good info for the guys back in the factory.”

After suffering retirements in both Miami and Barcelona, Zhou Guanyu is confident Alfa Romeo have resolved the reliability problems on his car.

The 2022 rookie said Monaco was a track it was especially important to trust your car at. “It’s a place where you need to respect the track and finding the right feeling in the practice sessions will be very important, but I know the team is behind me and I can rely on them to make the most of the weekend.

“We have all been working very hard to make sure reliability issues don’t get in the way of our work anymore and I’m confident we can show again how competitive we can be. I have some very good memories from Monaco, where I won last year [in Formula 2] and I am keen to make more now that I am in F1.”

“Our cars are bigger than ever before, wider than ever before, the track is the same width that it’s been forever and we’re faster than ever through Monaco so the percentage chance of overtaking is minuscule, the chances of crashing are massive and so qualifying position is everything,” he explained.

Hamilton, who has won the Monaco Grand Prix three times, described it as “a track where you have to be able to have your cake and eat it, in terms of how you approach each corner. In other circuits sometimes you brake a little bit earlier going in and work on making sure you get the exit; in Monaco you want to make sure you take everything on the way in and everything on the way out.”

Ferrari’s esports team has signed repeated F1 esports finalist Fabrizio Donoso to its squad. The Chilean sim racer has competed in every year of the tournament, having been with Renault and Alpine’s esports team for the past two years.

“Coming into 2022, my future wasn’t decided and I can say today I’m very lucky that Ferrari put its trust in me for the upcoming season,” said Donoso.

“Racing for that legendary name has always been a dream of mine for those who know me very well and it’s finally coming true. I’m looking forward to the season with Brendon [Leigh, 2017 and 18 champion] David [Tonizza, 2019 champion] and Kamil [Pawlowski] as I’m sure we can achieve the success we want.”

On this day three years ago… 💜

"My favourite part of the track is definitely the ‘Piscine’, which is the corner combination of two esses by the swimming pool. It just feels amazing, I really enjoy driving there."#F1 pic.twitter.com/vKTHsfyAuc

"We haven’t won this race in 10 years. That’s what we need to do. It’s nice to win the pole and that’s great, but there is only one lap around this place that matters, and that’s the last lap of the race next Sunday."

Professional athletes are often held to higher standards and praised for their strength – but what’s not shown on camera are the personal moments of adversity. Even after I accomplished my life’s mission, I faced the question of, 'What now?'

Charles and Carlos: Voice actors for a day (Ferrari)

Charles Leclerc and Carlos recently put aside their race suits and helmets to become voice actors for a day, stepping up to the microphone for the latest Disney Pixar feature film, Lightyear which tells the 'true' story of Buzz Lightyear, the hero of the Toy Story film franchise, which first appeared on screen back in 1995.

"The Formula Regional European Championship resumes after a three-week break for rounds five and six at Monaco as part of one of the most important events of the Formula 1 calendar."

Mexican driver and Campos Academy member Carrasquedo is 20th in the standings after the Algarve season opener, and explained on Instagram that he will not be able to race at Jerez this weekend. Wurz is racing for Prema in F4 this year and started his 2022 by winning the United Arab Emirates championship. He’s currently embarking on a dual campaign in ADAC and Italian F4, and sits fifth and ninth respectively in the two series.

The FIM, IRTA and Dorna Sports are obliged to announce changes to the 2022 FIM Moto GP™ World Championship calendar. Homologation works at the KymiRing, together with the risks caused by the ongoing geopolitical situation in the region, have sadly obliged the cancellation of the Finnish Grand Prix in 2022.

After McLaren joined the list of teams saying it will be nearly impossible to stick to F1’s budget cap if inflation and freight costs continue to rise, Frood 19 raises a point about F1’s international status. Will teams based in different countries need different budget cap increases? And if so, how could that be implemented?

What happens if inflation is different in different countries? For example, it could be as high as 9% in the UK but lower in Italy. Similarly, energy costs are rocketing in the UK but not increased nearly as much in France. In that scenario would Ferrari and Toro Rosso get given a different cap to the UK teams?

To extend this thought, if the UK goes into recession and it effects F1 teams (or wider supply chain) significantly, what happens then? Is it a sporting issue for the FIA?
@frood19

Happy birthday to Lustigson and Zazeems!