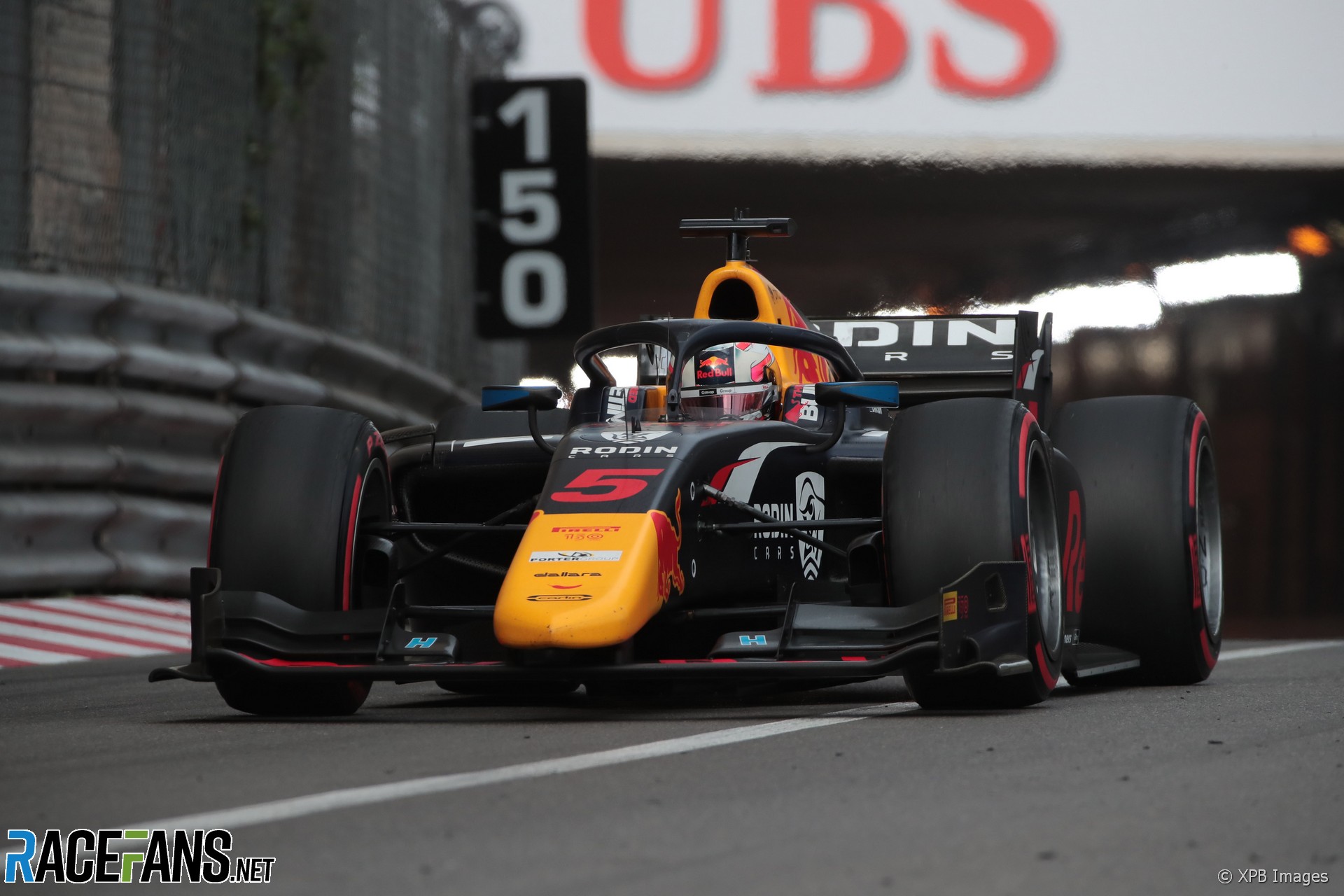 Liam Lawson set the fastest time during Formula 2’s split Monaco qualifying session but is under investigation for improving under yellow flags.

The Red Bull Junior Team driver was quickest out of the two combined qualifying sessions. However he set his best time after Felipe Drugovich crashed out of the final Anthony Noghes corner and yellow flags were waved.

Instead of a single 30-minute session, drivers are split into two sixteen-minute group sessions for Monaco qualifying. One driver from each team is put in group A or group B, with track evolution occasionally resulting in more favourable conditions for one group or the other.

Track temperature was 41C at the start of Group A’s session, with drivers only going out for sighting laps in the first minutes. The fastest lap only a 1’23.693 from Cordeel, at the halfway point in the session.

Drivers went back out on track in the final seven minutes of the session, Drugovich setting a 1’21.795. Doohan and Lawson were unable to do better than 1’22 times but Armstrong and Boschung slotted in behind Drugovich’s times.

Boschung radioed the Campos pits to say “I’m sorry mate, I’ve hit the wall, my steering is bent” with a minute and a half remaining, effectively ending his session at sixth-fastest in the group and five tenths off Drugovich’s time.

At the chequered flag, Drugovich clipped the wall on the final corner and brought out a yellow flag in the final sector. Lawson set a faster time, beating Drugovich with a 1’21.299, as did Iwasa with a 1’21.288 but with yellow flags being waves, both times were called into question. Every car that had passed Drugovich’s car was placed under investigation.

As with the first group, no drivers set representative times in the first half of the session, with genuine hot laps coming in the final seven minutes.

Logan Sargeant’s 1’22.230 was the first fast time on the board, just over a second off Lawson’s fastest time in the first group. Pourchaire improved to just behind Sargeant before Nissany set a 1’22.178 to go fastest in the session so far.

Hughes clipped a barrier in the final corner but managed to keep it on track, setting a 1’22.011, only to be immediately beaten by Daruvala’s 1’21.928. Fittipaldi was then able to beat both of them, taking the fastest time of 1’21.719 into the final three minutes.

Vips and Pourchaire were both able to improve but not by enough to match Group A’s times, Pourchaire’s 1’21.535 still two tenths off the fastest laps in the first group.

In the final two minutes, Hughes made an error into the fast entry of the Swimming Pool complex, clipping the inside barrier, catching the kerb and launching the car, hitting the outside barrier hard. His Van Amersfoort car was wrecked and the session was red flagged. Thankfully, Hughes affirmed to his team that he was okay, despite the violent crash.

The session was not resumed with no time available for drivers to start further laps, putting Group A’s drivers at a significant advantage but with drivers still under investigation for improving times under yellow flags in the final sector.

The results mean that Lawson takes provisional pole for Sunday morning’s feature race, with Pourchaire alongside on the front row having topped Group B with a slower time. The order then interlocks, with Group A drivers starting ahead of the Group B driver corresponding to their position.