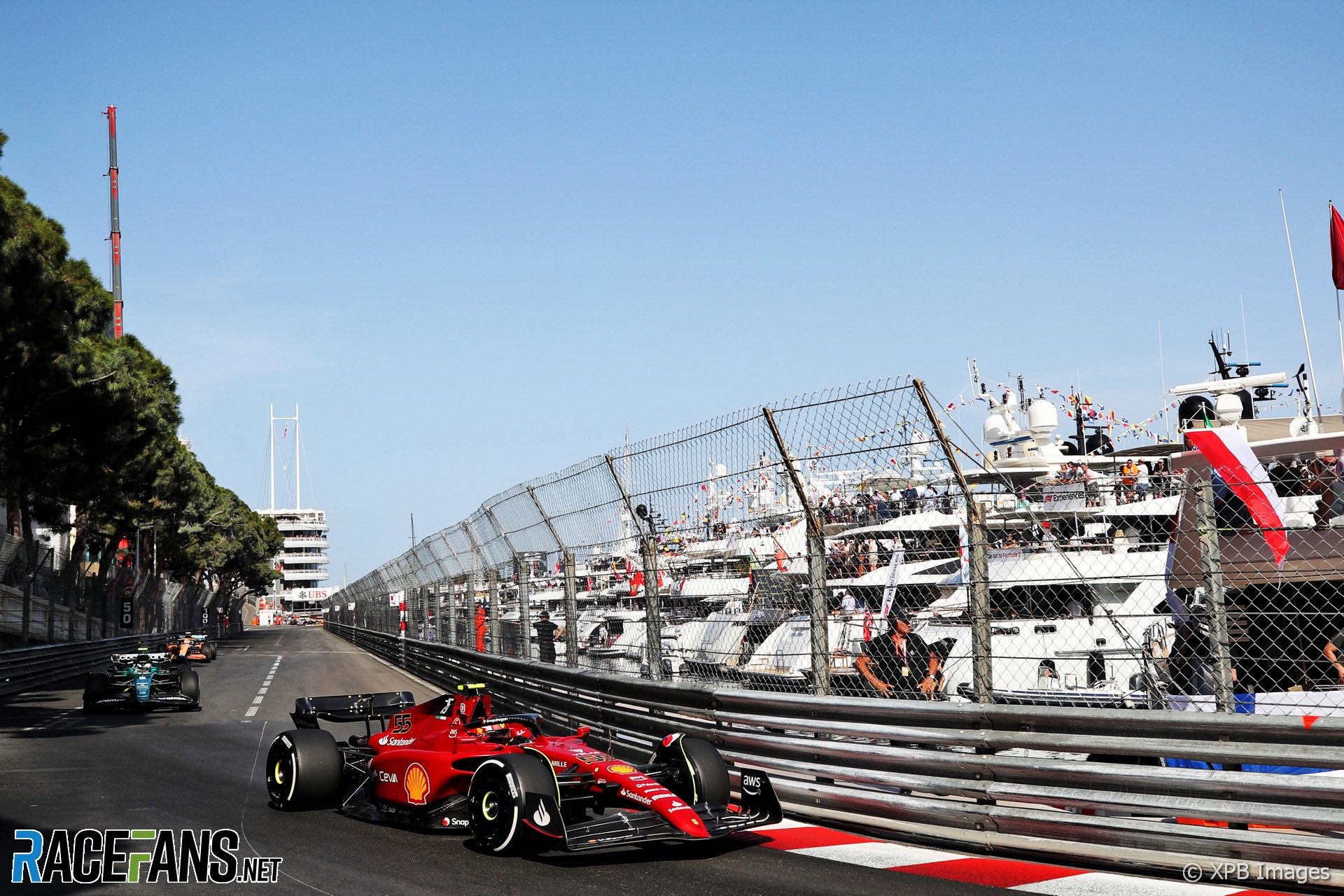 The Monaco Grand Prix stewards have fined Ferrari €25,000 (£21,240) and handed Carlos Sainz Jnr a reprimand after an “unacceptable” impeding incident in practice.

Sainz impeded the Aston Martin of Lance Stroll at the final corner of Anthony Noghes around 21 minutes into the final hour of practice. Stroll was completing a push lap when he passed Yuki Tsunoda’s AlphaTauri exiting the Rascasse corner, before having to back off to avoid hitting Sainz into the final corner, who was preparing to launch on a push lap of his own.

After investigating, the stewards handed Ferrari an unusually severe fine of €25,000 and giving Sainz a reprimand for the incident.

The panel of stewards explained that Sainz had been given “a series of grossly incorrect messages, by radio, about the gaps to the cars behind” by his Ferrari team prior to the incident.

“It is unclear to the stewards why such misleading information was given to the driver, who was under the impression that there was no car immediately behind him,” the stewards continued. “Due to the poor rear visibility at that part of the circuit, the driver was relying entirely on the team’s messages.”

Despite having not been given sufficient information from his team, Sainz was also reprimanded for driving too slowly before he was caught by Stroll.

“Notwithstanding the above, it was noted that the driver of car 55 [Sainz] almost came to a stop on the circuit,” said the stewards. “This is unacceptable and hence the penalty of a reprimand is imposed.”

Sainz was also involved in another incident Sainz and Sebastian Vettel approaching the Casino Square, where Sainz was considered to be driving “slower that can be considered reasonable in view of the location and circumstances” by the stewards and leaving Vettel irate over team radio. This second incident was not officially investigated by the stewards.

Ahead of the upcoming qualifying session that “similar behaviour by any driver during qualification may involve much more severe penalties”. Sainz’s reprimand is his third driving related reprimand of the 2022 season, leaving him two away from an automatic 10-place grid penalty.

The stewards also fined Alfa Romeo €10,000 (£8,500) after Zhou Guanyu was found to have impended Max Verstappen. The stewards noted his team advised him he was about to be passed by Nicholas Latifi, but not the Red Bull driver. Zhou was also given a formal warning.

“The team admitted it was at fault and taking into consideration the lack of rearward visibility in various parts of this circuit, the stewards impose the lesser penalty of a formal Warning on the driver.

“As previously noted, the stewards stress the importance of accurate and swift communication between the teams and their drivers, and note that drivers must exercise care in where they position their cars, and their respective speeds, during qualification.”

The stewards explained a lesser fine was handed down in comparison to the Sainz incident “because in this case there was a lack of information, in the former case the was significant wrong information.”