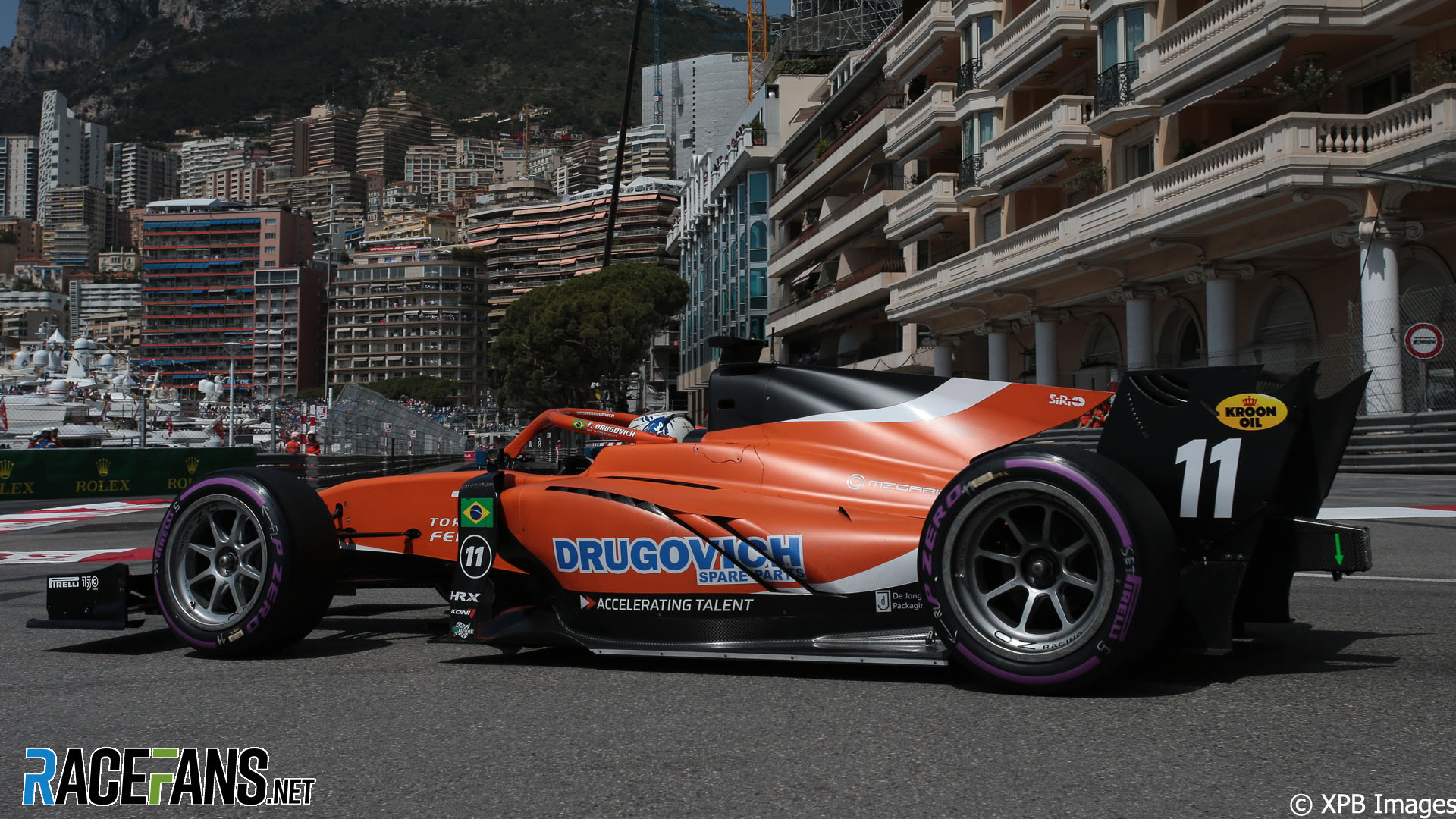 Drugovich had inherited pole for the feature race, after Liam Lawson and Ayumu Iwasa were penalised for yellow flag infringements in qualifying, with Pourchaire alongside him and Jüri Vips and Jack Doohan on the second row.

Liam Lawson failed to get away for the formation lap from fifth, so was pushed back into the pit lane to start.

When the lights went out, Drugovich got away cleanly with the lead, but yesterday’s race winner Dennis Hauger managed to steal a march on Enzo Fittipaldi with after battling from Saint Devote through to Massenet to take fifth, the main action of note from the opening lap.

After 19 laps, the yellow flags were shown in sectors one and three on due to Amaury Cordeel parking his car just after the start/finish line, having hit the barrier on the exit of Anthony Noghes, and bringing out a Safety Car.

Drugovich and Pourchaire both pitted at the same time and both endured equally messy, slow stops. Those who had pitted were then halted at the end of the pit lane in a bizarre incident where pit exit was blocked by marshals wheeling Cordeel’s retired car back into the pit lane. However, Drugovich kept the lead, as cars eventually rejoined behind Bernd Maylander in the Safety Car.

The Safety Car was brought in on lap 22. Liam Lawson managed a move around the Fairmont hairpin to take 12th place from Marino Sato, shortly before Clement Novalak found the wall in the same corner, prompting another Safety Car.

“Lawson is the biggest dick on the track, I don’t know what to do with these guys, man, it’s a joke” mourned Novalak after his second collision-related retirement of the weekend. However, stewards concluded that no further action was necessary over the contact.

Pourchaire made a valiant effort to pull himself to the back of Drugovich’s car by lap 30 and by lap 35 was just inches away from the rear of Drugovich’s car through the tunnel. However, the ART driver could not find a way to get alongside the MP Motorsport car no matter how hard he pushed.

Jehan Daruvala made an incredible late move on Calan Williams for eighth through Tabac on lap 38, forcing Williams down the order and allowing Logan Sargeant past him as well.

On the final lap, Iwasa and Williams found the barriers at the Fairmont hairpin. However, this did not deter the leaders, who were close to crossing the finish line. Drugovich took the chequered flag with Pourchaire following behind with the pair holding a substantial lead to third-placed Jüri Vips.

Drugovich retains the lead of the Formula 2 championship having extended his advantage to 32 points over Pourchaire, ahead of the next round in Baku.