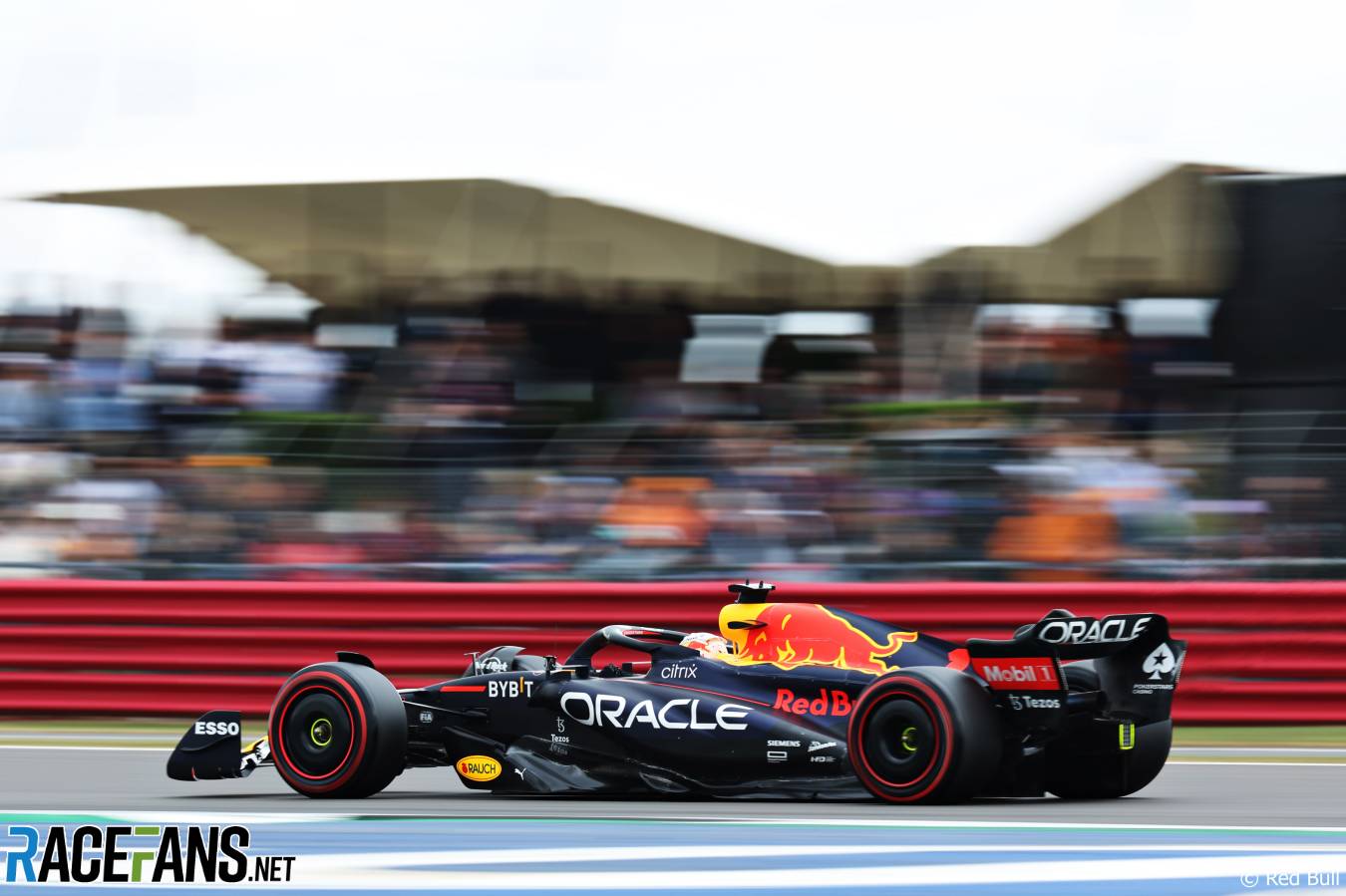 Max Verstappen stated his intentions for qualifying by going fastest by four tenths input a second in final practice for the British Grand Prix.

Verstappen’s best time of a 1’27.901 was enough to see him end practice comfortably clear of Red Bull team mate Sergio Perez and almost half a second clear of Charles Leclerc.

The two Mercedes of George Russell and Lewis Hamilton were fourth and fifth, ahead of Carlos Sainz Jnr in the second Ferrari.

Overcast skies greeted drivers over Silverstone as they prepared for the final hour of practice ahead of qualifying. Air temperature was only around 17C, while the track itself was a cool 24C.

Teams were keen to get out with many drivers heading straight onto the soft tyres to dial in their cars ahead of qualifying. Charles Leclerc set the early pace with a 1’29.452, just under two tenths faster than Red Bull’s Sergio Perez. The two Mercedes of Russell and Hamilton moved into third and fourth places, before an improvement by Hamilton saw him move ahead of his team mate.

Then it was Verstappen’s turn to venture out on the soft tyres and he used them to move to the top of the times with a 1’28.498, over three tenths faster than Leclerc. Hamilton also improved his personal best time to move up to second, just under two tenths slower than Verstappen’s best.

Around half way into the session, the risk of rain for the remainder of practice had reduced further. With 25 minutes remaining, the track fell silent as teams brought their cars in for checks and last set up tweaks ahead of their final practice runs ahead of qualifying.

Russell was the first of the top six runners to attempt a qualifying simulation run. He improved to go third fastest, just over five hundredths off team mate Hamilton. Leclerc then set a personal best to go within two thousandths of a second of Verstappen, but then the Red Bull driver delivered a strong lap of his own to improve by almost half a second and break into the 1’27s for the first time all weekend.

Perez lowered his own personal best time to move into second place – albeit just over four tenths from his team mate’s benchmark time. With only two minutes remaining, Verstappen took to the track for one final run before qualifying. However, he opted not to start a flying lap before the chequered flag, continuing around for a final tour before lining up on the grid for a practice start.

Verstappen therefore ended the session fastest of all by over four tenths from Perez, with Leclerc third fastest almost four hundredths behind the Red Bulls. The two Mercedes of Russell and Hamilton were fourth and fifth, just over half a second away from Verstappen’s best time.

Carlos Sainz Jnr ended the session sixth in the second Ferrari, four tenths ahead of Lando Norris in seventh and Valtteri Bottas in eighth. Mick Schumacher ended the session ninth for Haas, ahead of the two Alpines of Fernando Alonso and Esteban Ocon.