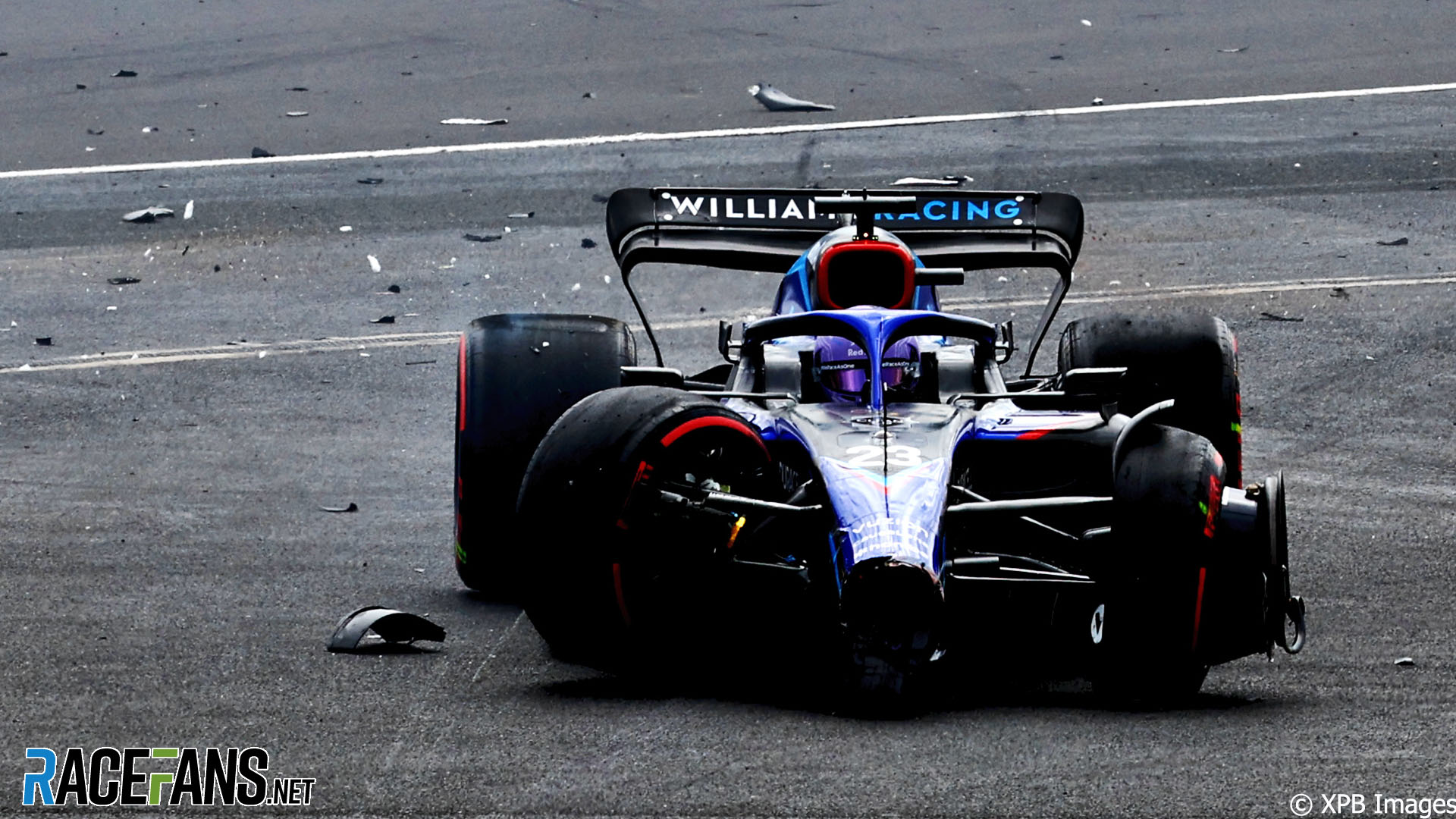 In the round-up: Williams says it has been able to repair the upgraded aero package on Alexander Albon’s car after his crash at the start of the British Grand Prix.

Albon will be able to run upgrades at Austrian Grand Prix

Albon was the only Williams driver to run the team’s major upgrade package at the British Grand Prix. However it was heavily damaged when he was taken out in the multi-car crash at the first corner of the race.

However Williams’ head of vehicle performance, Dave Robson, said it had been possible to repair much of the damage.

“Having damaged Alex’s car at the race start last weekend, coming straight into a sprint event is logistically difficult,” Robson acknowledged. “However, we have been able to repair or replace much of Alex’s car such that we can continue to understand the updates during FP1 on Friday.”

The team’s efforts to assess the changes will be made more difficult by the loss of one practice session this weekend. “There is very little time to change the car before it passes into parc ferme at a sprint event and so we will need to be bold going into FP1 if we are to continue to push the performance,” said Robson.

“I think we’ve mentioned it several times and every now and then you maybe have a year where you get away with it and nothing happens and everyone’s like, ‘oh, it’s okay,'” said Norris. “But you have freak accidents, like turn one [in the grand prix] and like what you saw in the last corner in F2, that it can happen even when you least expect it.”

Norris said the sport has been “lucky” to avoid worse crashes involving the kerbs, “because I think the halo genuinely did save someone’s life again today. Maybe not many people saw it, but good to see.”

He said that “something needs to be done” about the kerbs. “It’s always hard because you’ve got a guy, whatever kerb is there, if you’ve got a guy coming to T-bone you, no matter what height they’re at, it’s never a good thing.

“But the way that they get smashed up into the air and launched in the air is it probably comes out worse that way than if it was just a pure side impact in some circumstances.”

Lawson yet to learn when he’ll drive Red Bull

Liam Lawson does not yet know whether he will get to for Red Bull after replacing Juri Vips as the team’s test and reserve driver.

Vips drove in the first practice session for Red Bull in Barcelona, one of two sessions the team is obligated to give over to young drivers during 2022. He was subsequently dropped from the team after using a racial slur during a live stream, though he remains part of their junior driver programme.

“For me, it’s a very, very cool opportunity, obviously,” said Lawson. “But that stuff, I’ll wait to find out more, I guess. I don’t know exactly what sessions I could potentially be doing this year, but for now it’s it’s just carry on focussing on F2 and we’ll see what happens later. But it’s a great opportunity.”

The @FIA confirms no changes the the three DRS zones at the Red Bull Ring for the #AustrianGP weekend:https://t.co/TmIzPuyazf #F1

Great day back at home with some friends celebrating the victory! Got the chance to give them a lap around Fiorano on this F1 3 seater. 🤩

Alex Albon: 'I feel pretty much back to normal' (Williams)

The good thing is that it looks like our aero package is salvageable. The guys are now obviously working really hard to get that fixed and ready for Austria.

Carlin: 'It’s no secret that we’ve struggled a bit in F3 recently, so I didn’t expect us to have the weekend we had. However, the engineers and the mechanics worked very hard in the gap to understand where we thought we were missing performance.'

Bruno Michel's debrief: still all to play for at the halfway point (Formula 2)

We have seen half of the 2022 season unfold, and as I said above, Drugovich has been the most consistent driver so far. He took control of the championship after round two in Jeddah, saw Pourchaire reclaim it following Imola, but has since retaken the top spot and managed a comfortable gap to the French driver since Barcelona.

@Flig disagrees that Ferrari should have reacted more quickly to Charles Leclerc warning them he was losing time behind Carlos Sainz Jnr.

No matter what the decision (orders or not) the team will receive criticism.

We’re not even halfway through the season, Sainz still has a shot at the title and he did outscore Leclerc last year, so while I agree Leclerc looks faster, it’s too early to destroy Sainz’s racing spirit with a clear number two status.

Let’s see what a win does to his confidence, it could be a turning point.
@Flig