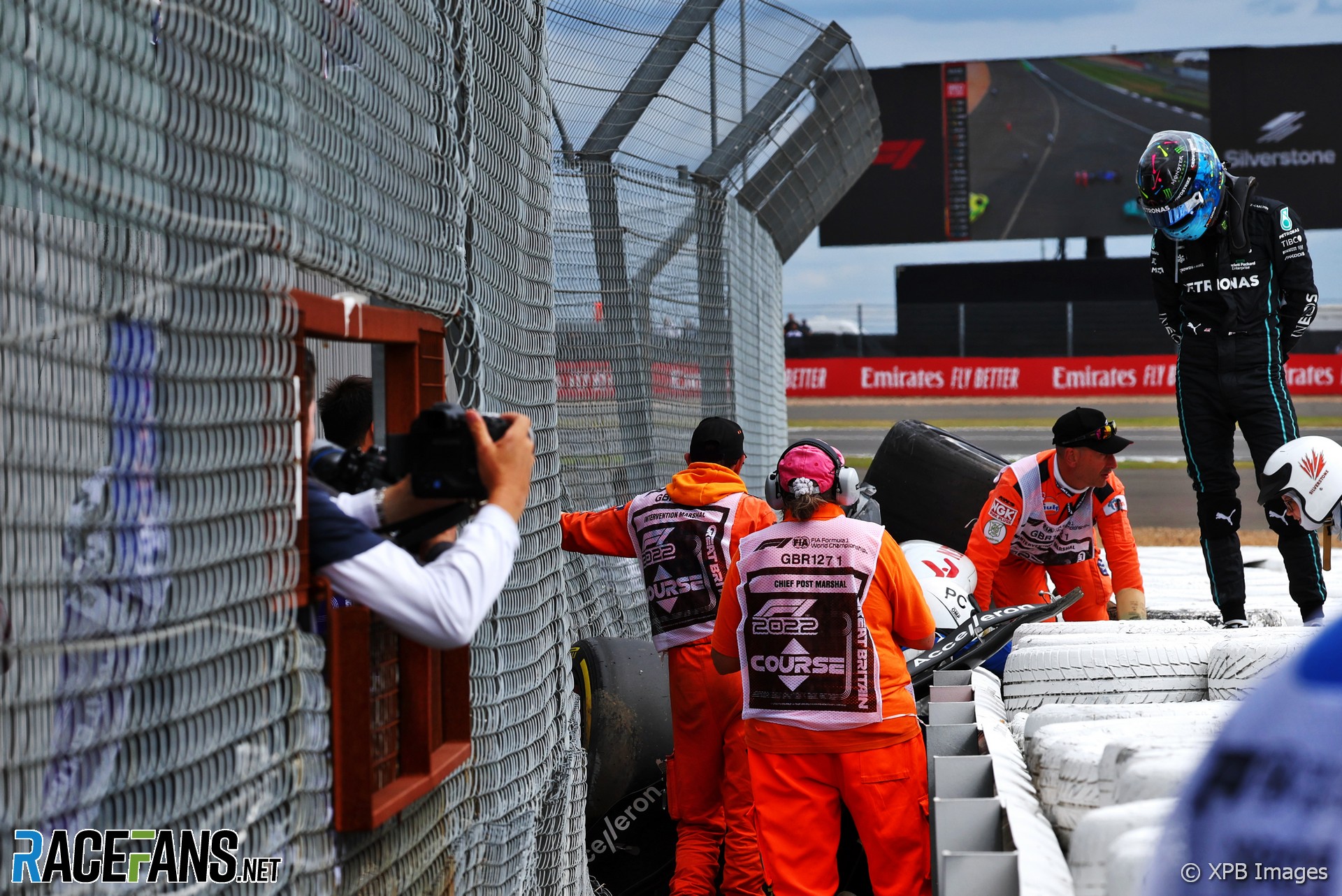 Zhou Guanyu did not realise his car had landed between two barriers until he saw pictures of his Silverstone crash.

His Alfa Romeo was sent airborne after he tangled with at the start of the British Grand Prix. It skidded though Abbey and into the gravel trap on the halo, before digging in and flipping again, over the tyre barrier and being caught by catch fencing.

“When the flip happened the first thing I was trying to deal with was release my hand off the steering wheel because you never know, you can break your hand very easily with a crash like that,” said Zhou. “The next thing while I was just rolling on the ground, I knew I would be facing a massive impact because the car wasn’t stopping.

“And then I tried to lock myself in a position that is the most safe possible, just waiting for the last impact. So I was just holding my hands back but keeping it reasonably tense so it doesn’t get flying around when you have the last impact.

“So that was the case, basically I was just waiting for the last, stop hit.”

Videos from the crash showed Zhou’s engine still running when the car landed. “Once I was basically stopped I didn’t know where I was because I was upside down and the next thing I felt was there was some leaking,” he explained.

He was concerned the leakage could cause a fire. “I wasn’t sure if it was from my body or the car,” he said.

“So I just tried to switch the engine off because the engine was still on [and] I knew if a fire starts it would be difficult to get out. So I switched my engine off.”

Zhou said that he now believes what he thought was liquid was numbness caused by the impact. “It wasn’t hurting, but it was very cold on that side. So I don’t know if it’s just the blood and not feeling anymore or something. I was just making sure.

“I was more worried about if the engine caught on fire because in that position you’re really stuck, even though I don’t know [if I could have got out] between the fence but you have to wait for them to get you down to get out.”

Zhou remembered speaking to the marshals and medical team members who arrived at the crash scene. “He was obviously making a conversation with me, he was just making sure I was conscious, everything okay, that I could remember what happened.

Members of the crowd shouted to Zhou to check on him but he said while he was trapped in the car he could not hear them, or George Russell, who had run over to try to help. “I couldn’t hear anyone, mostly probably the crowd when I finished getting out but by then I couldn’t hear much. It was just that one medical guy was making conversation.”

He said that the full scale of the crash did not strike him until “maybe afterwards, when I [was] out of medical centre” and saw replays of the crash. “Because I didn’t realise I was inside the barriers, I was thinking I was next to the barriers.

“I was actually between the barrier and the fence, which was – I don’t know how I survived but then looking back, obviously the halo, I saw, saved me.”

“I managed to get myself kind of out and the medical [them] put me into the medical car,” he explained. “But I only realised that when I saw the incident afterwards.

“I don’t know what happened, who hit me, because I was going straight next to the white line before turn one and suddenly there was a massive shunt.

“I had to kind of slide myself a little bit out so at least to have my leg kind of out of the top of the seat, then they were able to pull me out.”