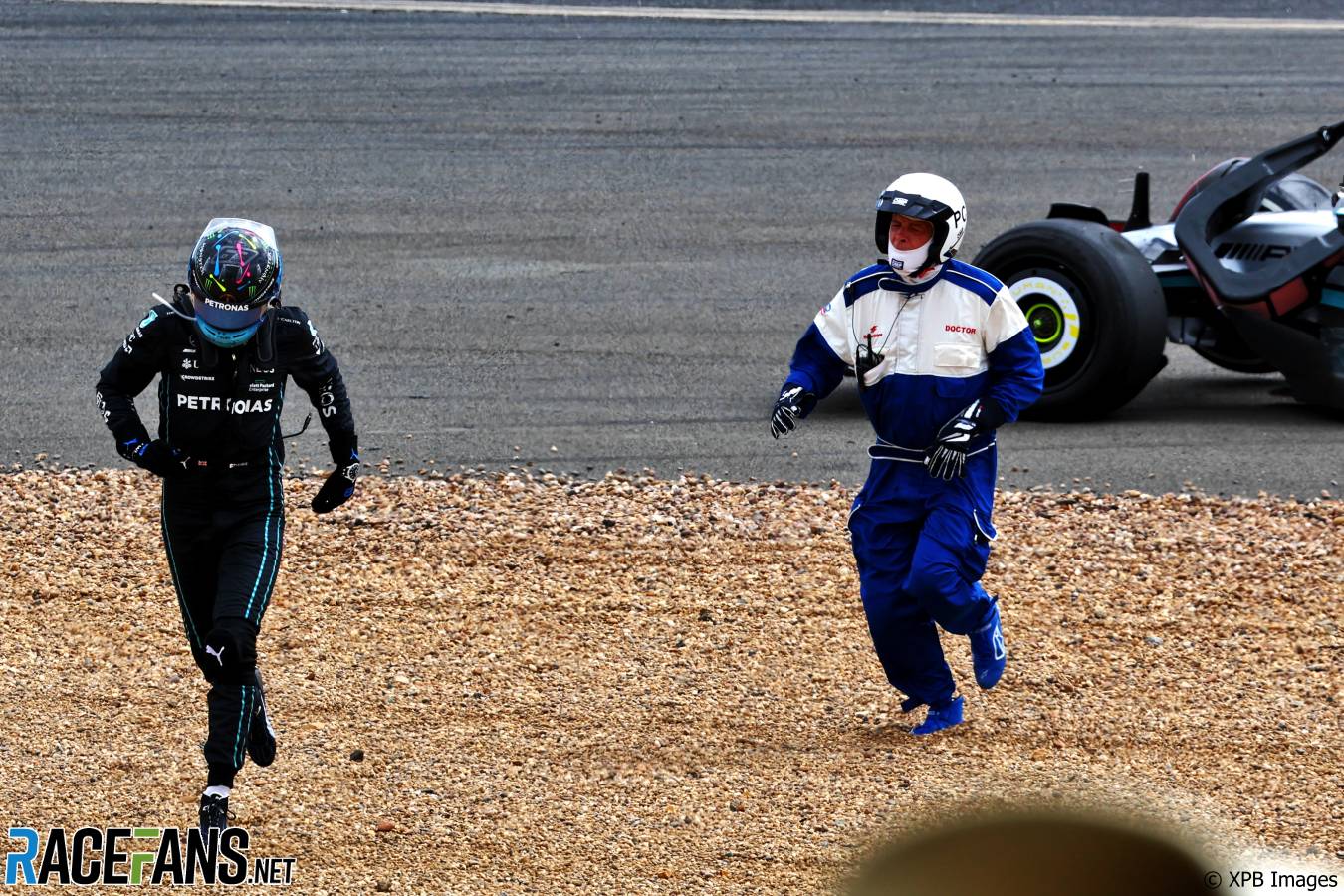 George Russell says his Mercedes team understood why he felt the need to check on Guanyu Zhou following his crash at the start of the British Grand Prix, despite it leading to his retirement from the race.

The Mercedes driver was knocked into Zhou’s car at the start of Sunday’s race, flipping it upside down, and sending it over a tyre barrier.

Russell stopped his damaged car and went to check on Zhou. When he returned to his car it was already being retrieved by marshals, forcing Russell to retire from the race, though it later emerged the damage to his car was not enough to prevent him continuing.

“It was just a natural reaction,” Russell explained. “For me to do that, obviously the race was red-flagged, and seeing such a horrific incident, I thought at the time as well my car was probably game over. As it turned out, it wasn’t.

“So I think that just added to the emotions, the frustrations, because we definitely could have got going again and probably could have scored a strong result.”

Mercedes team principal Toto Wolff said they were “proud of the character he showed after the incident” on Sunday.

“For me, it was sort of horrifying to see him trapped in there, literally not being able to get out of the car,” he said. “He was obviously fine and I could see he was moving.

“But I think we all, as drivers, we all know how sort of – I wouldn’t say claustrophobic – but you’re sort of in there pretty tight, you’ve got the helmet on, you’ve got the Halo there, the headrest, and then when you’ve got a tyre wall effectively on top of your head blocking your exit, hanging upside down, it’s just a horrible situation to be in.”

Zhou’s experience shows more thought needs to be put into the layout of barriers to prevent a repeat in the future, Russell believes.

“I think from every sort of disaster there’s an opportunity to improve as a sport or whatever it may be, and clearly things could have been maybe positioned slightly differently to have given him that exit.

“There was a gap between the barriers and the catch fence and he was obviously trapped in there. That needs to be resolved and, yeah, it wasn’t nice for sure.”

Footage of Zhou’s crash shot by fans showed how “scary” the moment was, said Russell.

“I think it’s an element of motor sport that you’re always going to have big accidents at some point during every calendar year. Every incident offers an opportunity to learn from.

“I think, the roll hoop got smashed off, and where the car rolled into, and also just for the fans as well, seeing the fan footage was pretty, pretty scary. So, it’s a constant evolution.

“I think as a sport, we’ve come so far, but it’s never going to stop. And if we fast forward 30 years we’re still going to be probably talking about the same things. And that’s just racing and what happens when you go at speed.”

Russell pointed out he had a similar experience of being trapped in a car earlier in his career. “I actually rolled my kart in a race in 2008,” he said.

“I was trapped under the car and I was actually burning my arm because the exhaust was stuck on top of me. And this other driver stopped to lift the kart off me and helped me out there.”