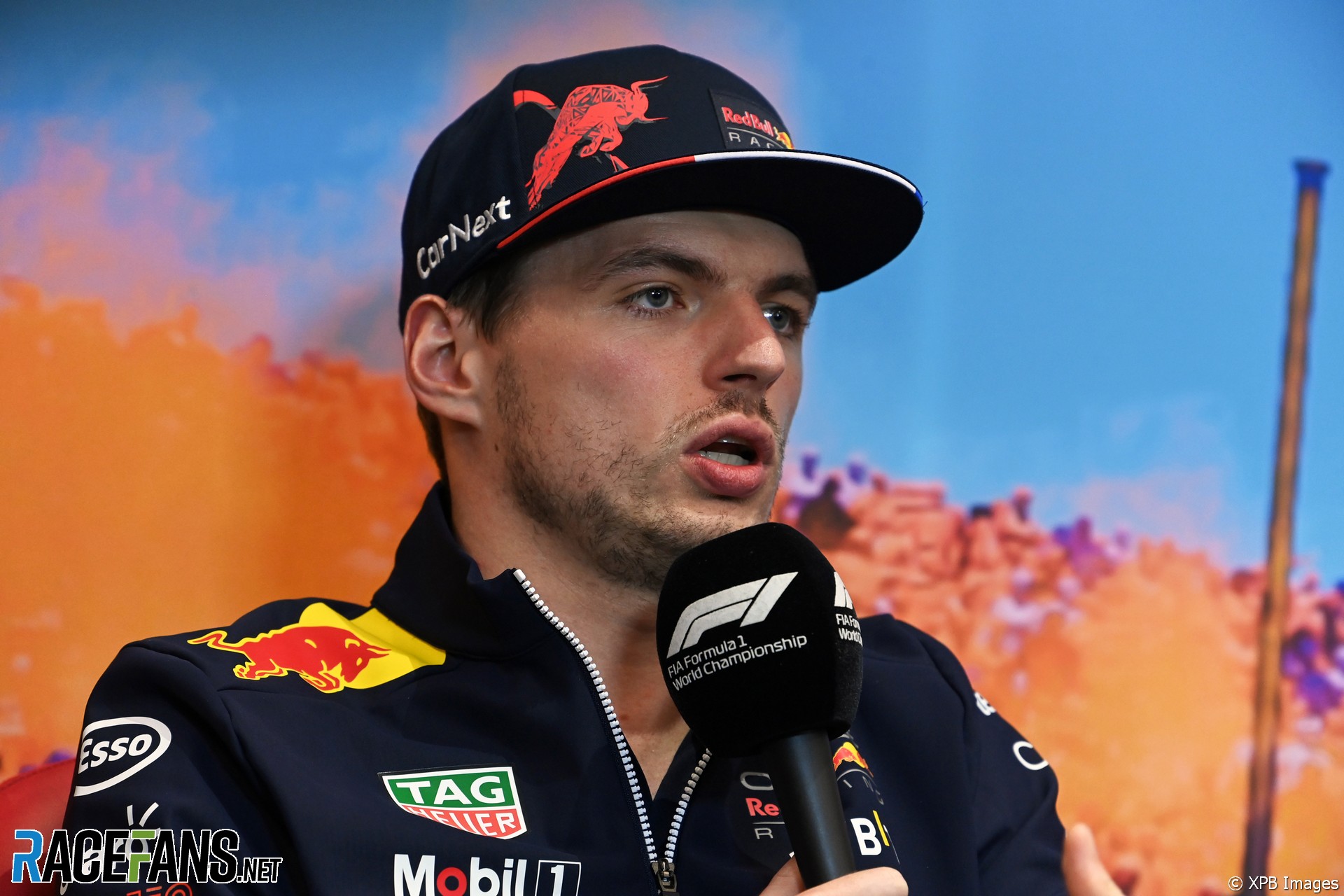 In the round-up: Max Verstappen and Lewis Hamilton exchanged digs at each other over their collision last year at Silverstone.

A pointed remark by Hamilton about his duel for position with Charles Leclerc in last weekend’s British Grand Prix prompted a response from Verstappen yesterday.

Hamilton and Verstappen collided at Copse in the race 12 months ago. The Mercedes driver was judged “predominantly to blame” for the collision by the stewards who noted he had “room available to the inside” when contact was made between him and Verstappen on his outside.

During Sunday’s race Hamilton successfully went through Copse side-by-side with Leclerc. “He’s a very sensible driver, clearly a lot different to what I experienced last year,” Hamilton said of the Ferrari driver in an interview with Sky.

Asked for his response to this by Dutch journalist Erik van Haren, Verstappen replied: “I think it’s great that, when you’re 37 years old, at some point you understand how to get the apex. So he will learn.”

AlphaTauri need rain to be competitive this weekend – Gasly

Pierre Gasly says AlphaTauri’s car is unlikely to suit the Red Bull Ring. “The more high-speed corners we have, the more we struggle because we don’t have the load,” he said. “The low-speed corners like Baku, for example, we seem to be more competitive.

“So on paper this one is not going to be an easy one. But that’s why if it rains it brings the minimum speed lower, which is always better for us. So we’ll see.”

Sergio Perez felt like he deserved a change in luck at the British Grand Prix, after the appearance of the Safety Car helped him to finish second, having fallen to the back of the field early on.

“I felt like I [was] definitely back into the game,” Perez said. “It’s probably the first time, definitely in [this] season that a Safety Car helps me so I was happy with it.”

Esteban Ocon has a new set of wheels this weekend #F1 #AustriaGP pic.twitter.com/yqdMelxqGq

Early rain in the paddock on Thursday has dried up but it's due to return on Saturday evening and could linger until the grand prix…https://t.co/boWgrwOnhf#F1 #AustrianGP #RaceFans pic.twitter.com/uSRgyVAqBt

Dilano will be replaced by Francesco Braschi for the 6th round in Budapest. Due to his injury, Dilano is not able to drive.

Great to get back to @iowaspeedway today! 230+ laps in the books. Felt really strong all day. Only 7 cars but always nice to be P1! Can’t wait to get back here for the race. @ToddAultIII @ECRIndy pic.twitter.com/ikcjFTyDnt

Dear @CSainz_oficial, I am happy you are safe. We will review the report and look into the matter with our @FIA safety department. https://t.co/zuRAq8g0ea

The Formula 1 Exhibition will tell its story with unprecedented access in a partnership with Manhattan West and renowned production company Round Room Studios – that produced or promoted the likes of Jurassic World: The Exhibition, Tupac Shakur. Wake Me When I'm Free, and Mandela: The Official Exhibition.

Insider: How Arrow McLaren SP will decide its third IndyCar driver for next season (Indy Star)

'I had to agree on terms for both,' Rosenqvist said this past weekend at Mid-Ohio. 'It was almost like doing two contracts, and Zak has the final say over where I’m going to be.'

This is the team that obliterates the opposition in F3. It last went title-free in the category in 2010 (while competing in the Italian and Euro Series), but in 2022 it took a long time to get off the mark. It came close a couple of times prior to Arthur Leclerc’s feature race win at Silverstone last weekend.

After the roll hoop structure appeared to fail on Zhou Guanyu’s car, Green Flag points out that absorbing an impact sometimes means a structure collapsing, to prevent what it’s protecting feeling the force:

The roll hoop absorbed the initial impact and the halo protected the driver after that. So the system worked. Could it be improved? Most likely, but the cars are pretty darn safe right now.

Zhou’s, Romain’s crashes, and Max’s last year, were as bad as F1 has experienced yet all three drivers are still racing.
@greenflag