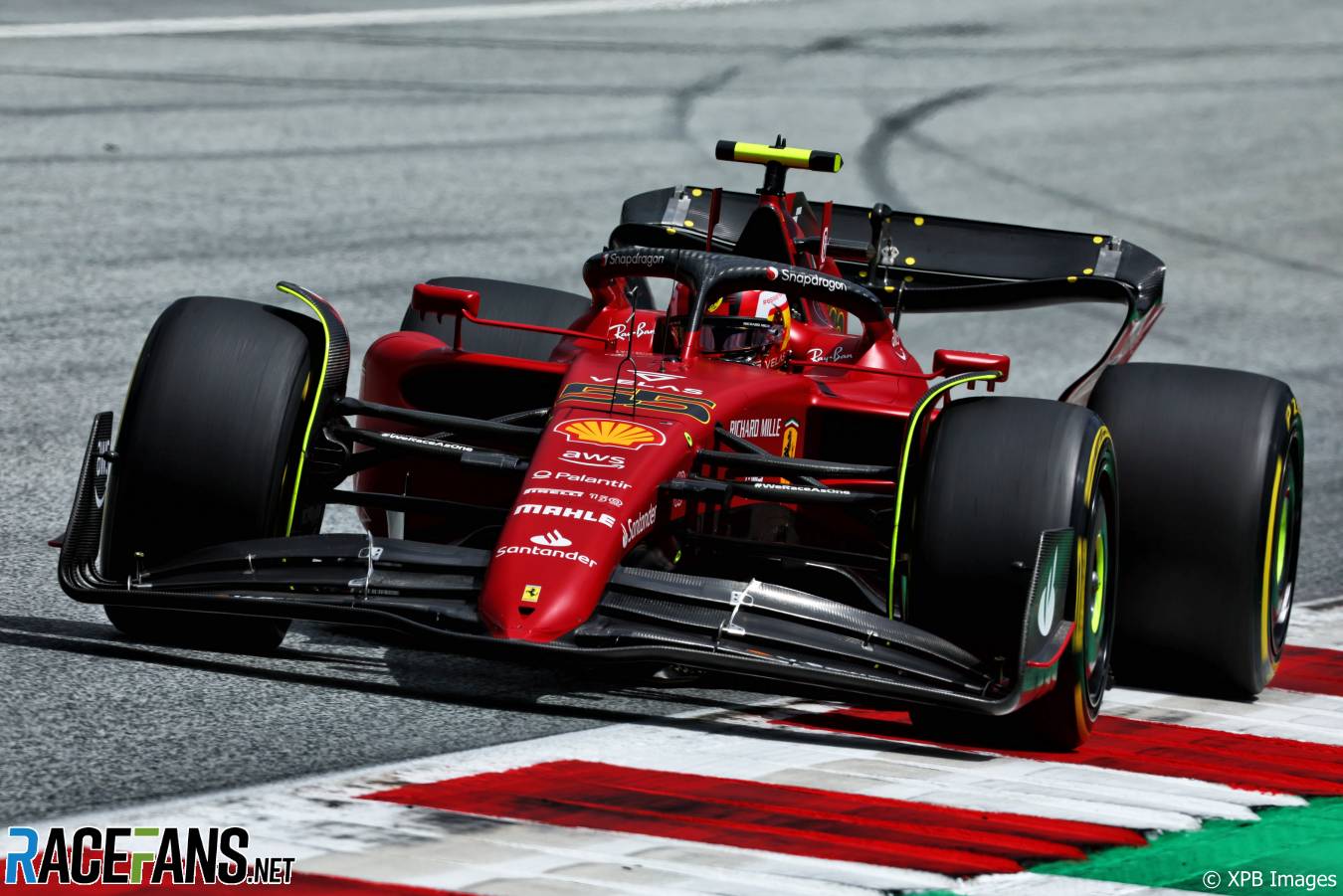 The Ferrari pair used soft tyres to sit top of the time sheets in the busy second practice session, with Sainz ending the session quickest overall by exactly five-hundredths of a second over his team mate. Sprint race pole winner Max Verstappen ended the session third fastest, having set his best time of the hour on medium tyres.

Although the skies were filled with clouds after a sunny start to the weekend of Friday, air and track temperatures were virtually identical to qualifying when the teams took to the track for the final practice session of the weekend.

Prior to the start of practice, Mercedes announced that they had swapped Lewis Hamilton to a spare chassis following his crash in qualifying on Friday and that they did not expect to get their cars out onto the circuit until around half an hour into running. However, Hamilton’s team mate George Russell was released out onto the track after only a short delay once the track had gone green at the start of the session.

Teams opted for a mixture of medium and soft tyres as they focused on long runs ahead of the evening’s sprint race. The Ferraris of Sainz and Leclerc went to the top of the times on the medium tyres with Sainz setting the benchmark of a 1’09.515, before Max Verstappen headed out on the soft tyres to set the fastest time, almost half a second quicker than the Ferraris.

Leclerc came over the radio to question if there were any problems with his power unit after sensing he may not have been getting optimum power from his car, however, he was reassured it was simply his engine mode setting and Leclerc was able to continue on his run uninterrupted. Both Verstappen and Sainz improved their times, while Russell moved third on the soft tyres with a 1’09.240, a quarter of a second off Verstappen’s best.

After spending almost half of the session in the garage, Alpine eventually sent Fernando Alonso and Esteban Ocon out onto the circuit, with Alonso going fourth fastest on the medium tyre. Verstappen then switched over to the mediums and used them to improve his own overall fastest time by just over the tenth of a second, before Alonso moved up into second place behind the sprint race pole winner. Ocon then replaced his team mate as the second ranked driver, setting a personal best time that was only half a tenth slower than Verstappen’s best.

Just after the half-hour mark, Ferrari chose to move onto the soft tyres for both Leclerc and Sainz. Leclerc made use of the faster rubber to immediately go quickest of all, a tenth faster than Verstappen. Later, Sainz replaced his team mate at the top of the times, setting a 1’08.610 to go exactly half a tenth faster than Leclerc.

With just under 15 minutes remaining, Mercedes finally released Hamilton out onto the track for the first time in the session having completed repair work on his car. Hamilton headed out on the medium tyres and completed a total of 14 laps, setting a best lap time that was good enough for him to go ninth quickest, just over a tenth behind team mate Russell in seventh.

None of the drivers at the top of the times improved their fastest laps over the final minutes of the session, leaving Sainz to take the chequered flag as the fastest driver of the session. Leclerc was second, half a tenth behind his team mate, with Verstappen third having set his fastest time on the medium tyres.

The two Alpines of Alonso and Ocon were fourth and fifth, respectively, with Sergio Perez sixth quickest in the second Red Bull. Russell ended the session in seventh, ahead of Valtteri Bottas and Hamilton in ninth. Lando Norris completed the top ten for McLaren, nine tenths slower than Sainz’s overall best.