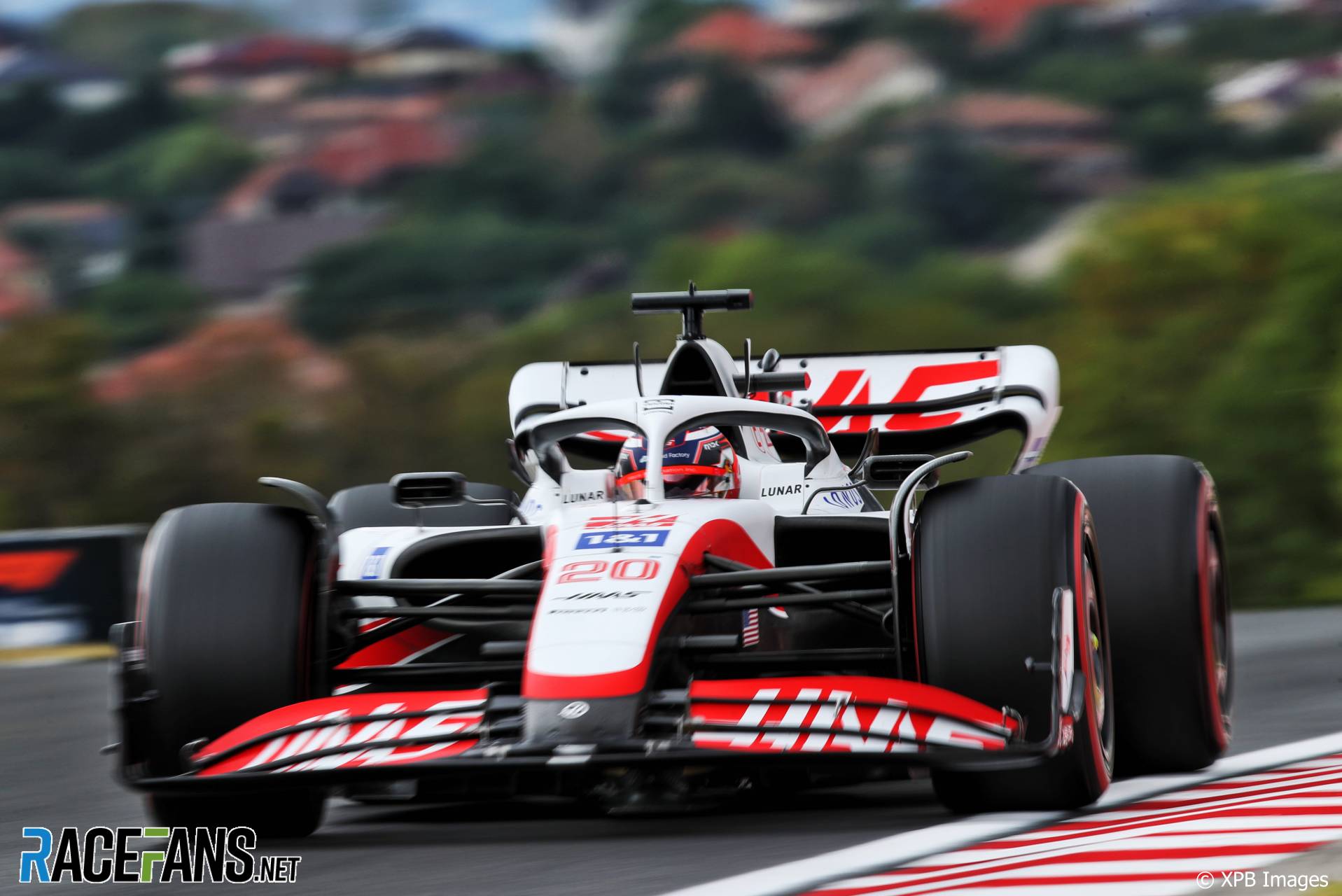 In the round-up: Kevin Magnussen says Haas’ major upgrade package for this weekend is working as expected after his first qualifying session in the updated car

Kevin Magnussen says Haas’ major upgrade package for this weekend is working as expected after his first qualifying session in the updated car.

Haas have introduced major revisions to their bodywork and sidepods for this weekend’s Hungarian Grand Prix on Magnussen’s car alone, with team mate Mick Schumacher racing with an older specification. Despite only qualifying in 13th place for today’s race – two places ahead of Schumacher – Magnussen insists the new package is working as intended.

“We need to give it a bit of time so we can extract more performance out of it, lap time wise,” he said. “But I think we at least have put an upgrade on that is doing what we expected it to do and we know there is potential there, so that’s a good step at least.

“It doesn’t look like we’ve taken a step back with it. It actually looks like already a bit of a step. Although we seem a bit off as a team this week, it seems like my car is a bit better and it’s supposed to.”

The Williams team were fined €1,000 by the Hungarian Grand Prix stewards for inadvertently sending out Alexander Albon in Q1 on a tyre set they had previously logged as having returned to Pirelli.

Albon was released by his team on a set of tyres that had been electronically logged as returned to Pirelli, prompting an investigation by the stewards. Williams explained to the stewards how an “administrative error” by the team had seen them return a set of unused tyres to the tyre supplier, rather than the set they had intended to surrender.

The stewards accepted that it had been a genuine error, but handed Williams a €1,000 fine for having breached the regulations. Albon qualified 17th on the grid for today’s race, with team mate Nicholas Latifi in 20th.

Nyck de Vries lost his podium finish at the first London EPrix after he was handed a post-race time penalty by the stewards for weaving while defending from Nick Cassidy late in the race.

Cassidy was pressuring the Mercedes driver for third as they began the penultimate lap, with De Vries deemed to have moved more than once along the start finish straight to defend his position heading to turn one. De Vries would eventually finish in third and participate in the podium ceremony, before the stewards penalised him with a five second post-race time penalty and one penalty point for his defending.

The penalty sees Cassidy promoted onto the podium in third, with De Vries dropping down to sixth in the final classification behind Oliver Askew and Mitch Evans.

Unbelievable job from the whole team to take us from our toughest Friday to our best Saturday together so far. YES TEAM!! 👊 pic.twitter.com/gYh3JDVVD3

George Russell is the type of guy who puts it on pole out of absolutely nowhere!

Eyes on tomorrow.
Pace is there, we didn’t manage to put the tyres in the right window for Q3 but it’s only Saturday. Huge congrats to @GeorgeRussell63 for the great lap. pic.twitter.com/oI8T4TwOX4

Today's decisions have left us completely speechless. Incredible job by Lucas to climb from P22 to P9 in the race. We won’t be giving up this title without a fight and we won't let injustice hold us back. (2/2) pic.twitter.com/u8QHg5JuG0

"George Russell became known as 'Mr Saturday' in F1 for his outstanding performances in qualifying. This year, that sobriquet has become 'Mr Consistency', for his record of finishing in the top five in every race. But at the Hungaroring Mr Saturday was back with a vengeance."

"They say there's two things certain in life - taxes and death, and I think for this race, the third thing that was certain was front-left graining."

"Sometimes, it takes that 30,000-foot view to say, ‘Hey, let’s try a different path this time, and let’s just see how it works this weekend.’ And I’m so glad they did."

"I said ‘hang on a minute, how long’s the recovery?’ They said three to four months. I couldn't afford that time, I couldn’t afford to miss the testing and development."

"David Beckham, Lewis Hamilton and members of the men’s team have all been in touch, but the Lionesses are taking their newfound celebrity very much in their stride. "

"Ever since the start I thought ‘I want to be in Formula 1’. That’s the place where I want to be. It makes me feel very lucky that I am in a racing household because if I wasn’t I don’t know where I’d be. I wouldn’t be sitting at a race track, I know that."

After Max Verstappen rued a mistake on his first flying lap in Q3 that left him exposed when he suffered power loss problems on his final effort, @krichelle thinks there is an emerging pattern to the crucial final phase of qualifying…

At this point, I am still surprised drivers rely on their second lap in Q3. They know very well that a yellow flag or red flag instantly ruins that. If anything the first laps of qualifying I’d say could be the most important laps of the weekend. They are at similar importance to race outlaps and inlaps.
Kribana (@krichelle)

Happy birthday to Egc and Osvaldas31!

A selection of RaceFans’s top reads from last month which you might have missed:

3 comments on “Haas upgrade “doing what we expected” insists Magnussen”