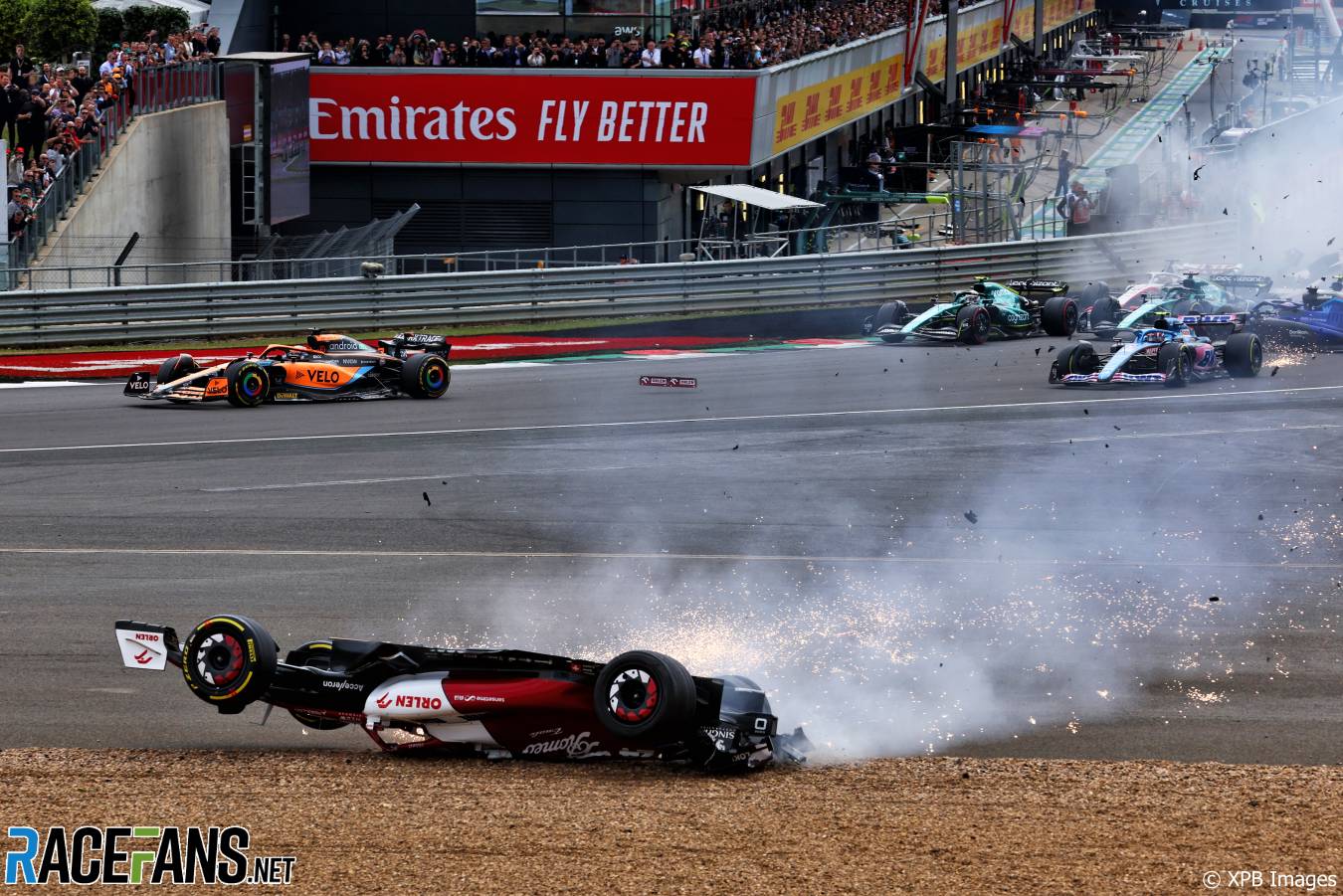 In the round-up: The FIA have confirmed that the design of roll hoops on Formula 1 cars will be changed in a bid to avoid similar accidents to the one experienced by Zhou Guanyu at Silverstone

The FIA have confirmed that the design of roll hoops on Formula 1 cars will be changed in a bid to avoid similar accidents to the one experienced by Zhou Guanyu at Silverstone.

Alfa Romeo driver Zhou survived a frightening accident at the start of the British Grand Prix when he was pitched upside down by contact with his helmet millimetres from the track before his car dug into a gravel trap and rolled.

Despite his roll hoop breaking off his car after his half-roll, Alfa Romeo later confirmed that his roll hoop had not technically failed, but that the forces placed on the roll hoop in the accident exceeded the threshold they are tested for.

From next season, roll hoop designs will be modified, such as featuring a rounded top in a bid to reduce the risk of them digging into the ground in an accident and a new load test applied on the hoops in a forward direction. The FIA say that roll hoop tests will be overhauled to make them more stringent.

“It was evident that an update to the requirements for the roll hoops was needed after the crash of Zhou Guanyu at Silverstone,” said FIA president Mohammed Ben Sulayem.

“While this incident showed us all how remarkable the safety systems in Formula 1 are, it also proved once again that we must continue to innovate and pursue safety matters without compromise.”

Christian Lundgaard has signed a multi-year extension with Rahal Letterman Lanigan Racing to keep him in the IndyCar Series with the team beyond 2023.

Lundgaard, who is competing in his rookie season in IndyCar in 2022, is 15th in the drivers’ standings with 272 points with a best finish of second place in last month’s Gallagher Grand Prix in Indianapolis.

“I am so pleased with Christian’s progress with the team and within the series,” said team owner Bobby Rahal.

“He has shown that he can be a force to be reckoned with in these races. He works well within the team, and we are pleased that we are continuing for the next several years because I believe he will continue to improve and be a potential winner in the very near future.”

Venturi Formula E CEO Susie Wolff has announced she will leave the team during its transition into Maserati ahead of next season.

Wolff was previously the team principal of the Monaco based team, before moving to the role of CEO and being replaced by Jerome D’Ambrosio. Venturi finished the 2022 Formula E season second in the team’s championship, losing the title in the final round after taking five wins with Edoardo Mortara and Lucas di Grassi.

“When I joined Venturi, my goal was to build a team that was not just successful on track, but stood for a greater purpose,” Wolff said in a post on social media.

“Little did I know four years ago the scale of the challenges we would face as a team. It was these tough moments that defined the resilience, faith and trust that we have built in each other: to come from racing at the back to consistently fighting for victories and titles. It was an honour to have led and represented such a talented and motivated group of people.”

Today our World Motor Sport Council voted to approve the new @F1 Power Unit regulations for 2026. I'm very proud of the @FIA management and technical teams who've worked with all stakeholders to deliver this. 1/2 https://t.co/bHu0BgRWbm

It's always a pleasure to welcome some familiar faces into our world. 💚

Who have you most enjoyed seeing in our #F1 garage so far this season? pic.twitter.com/5q72fOsNbm

immerse yourself in an F1 cockpit and see what it's like hitting the marks for a live pit stop! 👌

tap below for the full video! 👇

I was excited for summer break, but now I’m ready to get back on a track again, been too long 🗓
Missing that pre race buzz!!#wseries #rethinkracing #summerbreak pic.twitter.com/EbX5SLJfUx

"I studied why great teams were not able to repeat great title (runs). No sports team in any sport has ever won eight consecutive World Championship titles and there are many reasons for that, and what is at the core is the human."

"In the past at Mercedes, normally it used to be only one team we battled against, so then it was just focused on those two cars. But now I can have six cars around that we need to be aware of. So that’s nice. This season is probably the most enjoyable so far. Okay, maybe you don’t always remember things, but it really feels like I’m enjoying F1 more than ever."

"My perspective on that was from the other end; we (Brawn GP) started brilliantly, didn't have the resources to keep up and were struggling to get near the podium by the end of the year. If you looked at the situation with McLaren back then, the car that they launched wasn't really equivalent to the capability within the team."

"Ricciardo favors a neck harness and resistance band for building both strength and endurance. For strength, trainer Michael Italiano has Ricciardo step back with the band taut around the back of his head. Ricciardo then moves his head from side to side, for 4 sets of 30 repetitions."

"The big-budget biopic kicked off physical production in the town of Maranello, known worldwide as the home of Ferrari and the iconic car’s Formula 1 racing team. It follows the former racecar driver and auto manufacturing giant in the summer of 1957."

DRIVER'S EYE Under Lights - With Pit Stop! (AlphaTauri via YouTube)

"Enjoy a lap around the Bahrain International Circuit in 4K and see what it's like for a driver to stop on the marks for a live pit stop!"

Charles Leclerc can be forgiven for feeling frustrated at how his championship bid has slowly disintegrated over 2022, but @bascb believes Leclerc still has room to grow as a driver himself…

Funny how the article is formulated as if it is Leclerc’s right to challenge for that title and be the no. 1 at the team. Sure, he is the faster of them, able to get magic out of the car quite often. And he is really good at racing, attacking and defending.

But just like Ferrari as a team have things they badly need to do – get a strategist who actually watches what is going on out there on track and react/predict and be flexible AND learn how to do that in a timely manner, sort out their reliability – Leclerc has to learn as well. He does seem to have gotten over the thing where he went through his tyres a lot faster, but yes, he needs to be the one to tell his team what he wants, has to read he races himself.

We’ve seen the likes of Vettel, Alonso, Hamilton, and Verstappen as well do that – ask about where the race is going, watching what was going on off the big screens and anticipating etc. Sainz seems also capable of doing that, and it helps him even out the lack of top performance with his teammate.

This year the title is out of their hands. Ferrari should stop overthinking their races. Just get out there, make the car fast, focus on having their drivers get the most out of it on Saturday and prepare for Sunday. And on Sunday cut the mistakes, make timely decisions and get the drivers’ input in the loop. If that all works, they might have another shot (if things go south reliability wise at Red Bull) or at least can stay ahead of a slower but far more consistently scoring Mercedes team.
@bascb

Happy birthday to Luts and Electrolite!