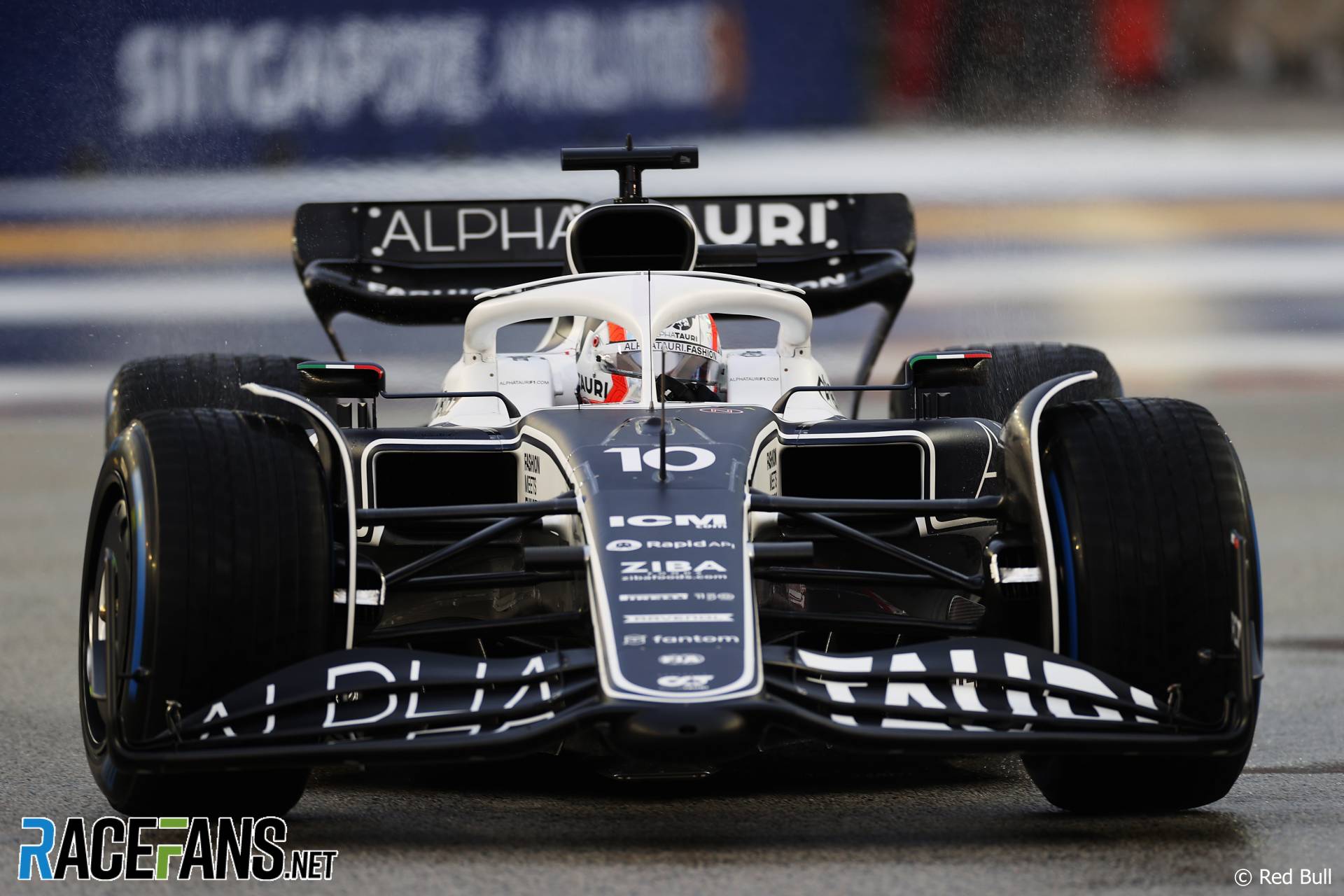 In the round-up: AlphaTauri’s Pierre Gasly says the team must take advantage of having both cars starting in the top ten in Singapore to score points

AlphaTauri’s Pierre Gasly says the team must take advantage of having both cars starting in the top ten in Singapore to score points for their constructors’ championship position.

Gasly and team mate Yuki Tsunoda will line up seventh and tenth on the grid for today’s Singapore Grand Prix. AlphaTauri are currently eighth in the constructors’ championship on 33 points, just one behind Haas, who have not scored any points over the last five races. Gasly says the team must take advantage of their starting positions to score solid points and improve their championship position.

“We know how important your starting position is here in Singapore, so being in P7 is really positive, with Lando [Norris] and Fernando [Alonso] just ahead of us, so we’ll see what we can do from there,” said Gasly.

“I think we have a big opportunity tomorrow to score points with both cars, so we need to utilise this to help in our championship battle, and we’ve seen today that we can do well in these difficult conditions so I’m hoping for some more rain.”

Alfa Romeo driver Zhou Guanyu says that he and his team made the “wrong choice” in switching to slick tyres for the final minutes in Q2.

Zhou was one of three drivers – along with the two Aston Martins of Lance Stroll and Sebastian Vettel – to fit dry soft tyres in the closing minutes of Q2 in qualifying for the Singapore Grand Prix. Zhou was already in the drop zone when he took to the track on slicks, but failed to improve his time and was eliminated slowest in 15th. Vettel and Stroll also both failed to progress to Q3.

“Looking back, definitely it wasn’t the right tyre to go,” admitted Zhou. “The track was pretty dry apart from like three or four corners and these four corners are very damp.

“Unfortunately I think we had a chance today but first lap in Q2, we got blocked by the yellow flag of Mick [Schumacher] in the wall and then I got my best lap, was second on inters so there’s a lot more potential. I feel like we have the chance, but unfortunately a wrong choice put us out.”

The rain became heavier during the session, prompting a red flag 15 minutes in. By that time, Garcia had set a provisional pole time of a 2’30.762, which would ultimately turn out to be the fastest time.

The session restarted with nine minutes remaining but with no cars able to improve and conditions still treacherous. After cars began to aquaplane into corner runoffs, qualifying was red flagged again and not resumed.

Dominant championship leader Jamie Chadwick will start eighth, with Abbi Pulling ahead of her in seventh. Juju Noda and Bianca Bustamante were unable to set times within 110% of the pole lap but will be able to participate in the race based on their practice performance on Friday.

"When Singapore hosts the most popular motor sport this weekend, the visibility of digital assets will be far more subdued. The Monetary Authority of Singapore will let teams show their crypto sponsors’ logos only on cars and uniforms at the Singapore Grand Prix, but no advertising will be permitted around the track or in the local area."

"Both Lance and Sebastian showcased their wet-weather abilities in FP3 and were strong in the first part of qualifying, before a change to Soft tyres near the end of Q2 nearly helped them into Q3."

"Formula One racers are still more than a year out from zooming down the Strip, but numerous Las Vegas hotels are already fully booked. Bryan Ercolano, a vacation-property owner, is looking to cash in too. His portfolio includes the 59th-floor penthouse at the Palms Place tower and he wants to rent it out for $100,000 per night during the race."

"he people are really showing the potential. I think it takes a lot of time for a team in F2, like in F1, to get to the top. But luckily we are managing to do things very nicely and proper stuff now, with good strategy… I think every side in the team now is very complete."

"Alex Dunne, the 16-year-old Offaly native, has been making waves in the ROKiT British Formula 4 championship says that a career in Formula One remains the ultimate goal following a really strong 2022 season, and a trial at the Ferrari Driver Academy."

An issue with the brakes that got progressively worse led to a really tough qualifying. Disappointing, but we’ll be working hard overnight to find a solution. The car has very strong pace here and we’ll be doing everything we can to recover the lost positions tomorrow. 👊 pic.twitter.com/LpvZbNIY4o

Interesting to see Lewis in P3 on a drying track with slicks when the main struggle this year seems to have been warming up tyres for the W13. If it's dry he is gonna be flying. 👀

Slightly bizarre moment during @tedkravitz's Notebook – the usual @SkySportsF1 behind the scenes stuff during the Notebook in the media pen, only for an @F1 official to throw him out! #SkyF1 #SingaporeGP

Eight races in, @NaomiSchiff sat down with #WSeries rookie @racerbia on her season so far and hopes for the remaining 2022 races. 🙌

At the @f1nightrace this weekend, Bianca is hoping for a top 10 finish, adding valuable points to her standings. 🏁#WSeries #WSeriesSingapore pic.twitter.com/wdjGouYiL6

Word on the street at Petit Le Mans is the #NASCAR Le Mans car will be a lineup of Jeff Gordon, Jimmie Johnson and Mike Rockenfeller.

Max Verstappen may have been furious at his Red Bull team after they called him in to abandon a likely pole lap in qualifying because of a lack of fuel in his car, but @f1mre argues that the Red Bull pit wall made a wise call to prevent Verstappen starting from much further back…

I appreciate Red Bull’s decision to pit him. (after realizing their error) They just threw away a pole lap because they knew they’d probably be disqualified otherwise. They could’ve finished the lap and stopped immediately and tried something. But they knew they had no chance so took the hard pill of 8th with an aborted pole lap instead of disqualification and pitlane start.

These decisions make a top team. After an error they limited the damage.

I wonder how other teams would’ve reacted in the same situation. I think half of them would’ve finished the lap.
Imre