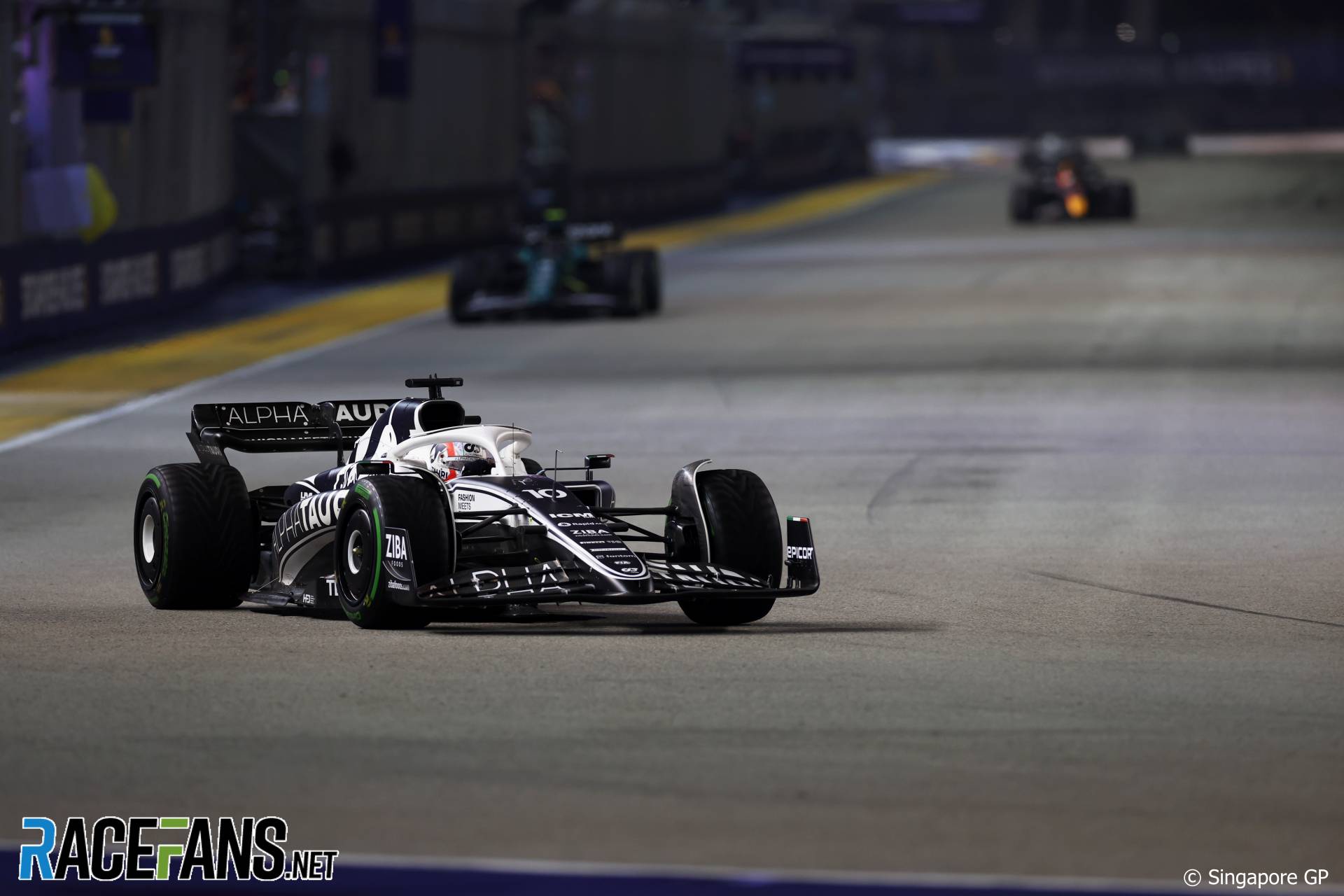 In the round-up: AlphaTauri admit they were too quick to put their drivers onto slick tyres as the track dried in the Singapore Grand Prix.

Pierre Gasly said he was “very disappointed” with his tenth place finish in the Singapore Grand Prix, saying his team threw away a chance to score more points by pitting early for slicks on the drying track.

“We took a massive risk boxing early and lost some positions,” he said. “I don’t fully understand why we made this decision, so we’ll need to review everything and learn from this mistake. For sure we left a lot of points on the table today, so it hurts quite a bit.”

His team mate Yuki Tsunoda crashed out after switching to slicks, causing a Safety Car period in which several of Gasly’s rivals were able to jump ahead of him by making their pit stops while the race was neutralised.

“After all of the hard work put in by the team and drivers over the weekend, we have failed to maximise the opportunity to score good points with both cars tonight,” said technical director Jody Egginton. “This is due to our engineering team committing too early to the switch to dry tyres.

“This has cost track position for both drivers, with Yuki also unfortunately sliding off track soon after. This meant we have only got one car to the flag and come away with far less points than we should have.”

Alexander Albon’s return to action in the Singapore Grand Prix ended early when he crashed out. He said it was a “confusing” incident as he did “nothing different from the previous lap.”

“However I just locked up on the front-left with the wet making it difficult to predict the brakes,” he explained. “Whilst there wasn’t an issue and ultimately it comes down to driver error, the brakes are very tricky in the wet and it’s hard to get them in the right window.”

There was some cheer for Daniel Ricciardo in Singapore as he ticks down his final races at the end of a disappointing stint at McLaren. He scored his best result of the season with fifth place yesterday.

“I’m very happy,” he said. “I haven’t had a top five all year so I’m very pleased with that.

“I feel like some things fell in our favour today, but I also think we were very patient and mature. It was very tempting to jump on a slick and try to be a hero in the position we were in but I think we were just sensible, bided our time and that obviously allowed an opportunity with other cars, and then a Safety Car.”

'Bond Muir said the decision on whether to complete the season was 'separate' to the survival of the series as a whole. She admitted W Series could potentially sacrifice its final three races of this year if it helped to secure its future.'

'Hugh Barter made it three wins out of three in Spanish Formula 4 at Navarra, but it was not enough to stop Nikola Tsolov becoming champion.'

French TV asking Fred Vasseur about staffing in Singapore and at home :
"For here we have the usual… Plus 2 lifeguards."

Verstappen was told about the decision from Mercedes.

That was an exceptional drive by @SChecoPerez. If they take that off him for a SC infringement, that would be a disgrace. I agree, that was his best ever drive, can’t underestimate how difficult those conditions were. #SingaporeGP

How did @SChecoPerez not get a penalty for safety car restarts ??? though???? @fia @f1

Guess Max has left a bit of an impression on this place…. pic.twitter.com/sN88ssxjol

Seriously weird wording there. ‘We don’t accept that conditions were a mitigating factor, but actually, we do so no penalty’. Since when has a wet track been a reason for a driver to fall unnecessarily far behind the safety car?

Everyone knows the rule. This appears to me to be the stewards trying desperately not to make the dreadfully unpopular decision to strip a driver of a win. The easy solution would have been to issue a drive through penalty. It seems like a silly precedent they’re setting here.
@Tommy-C