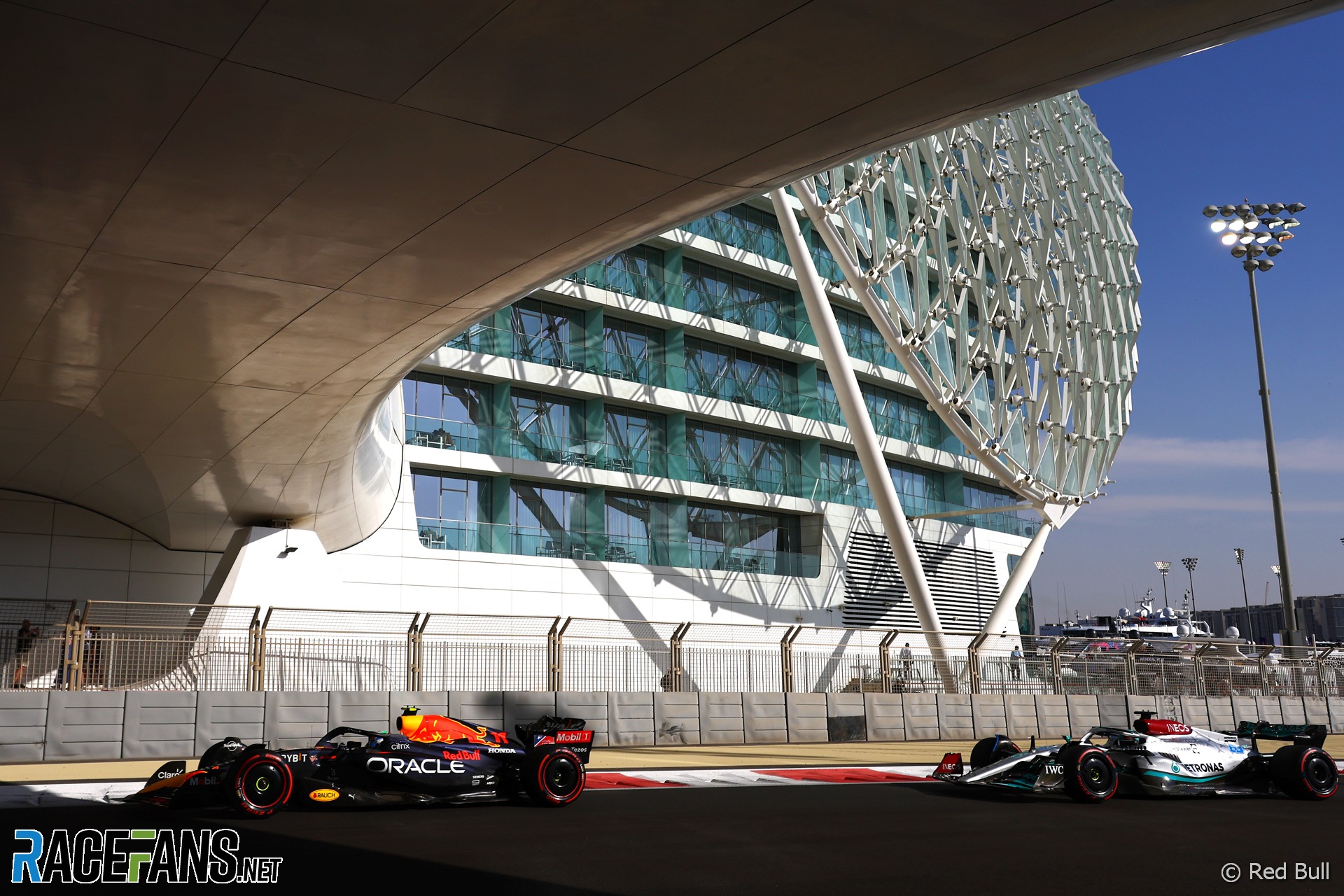 After knocking on the door of a possible first win of the season a handful of times after the summer break, Mercedes finally tore door off its hinges last weekend in Brazil by winning the sprint race and backing that up with a one-two victory in the grand prix.

As well as a reward for months of intense development, Mercedes’ victory was also strong evidence that they had finally overtaken Ferrari as Red Bull’s closest rivals at the front of the field, even if they still sit behind them in the championship.

But after Red Bull and Max Verstappen pointed to their set-up choice in Interlagos being a crucial factor in their defeat to Mercedes as they were locked into their setup from the end of the first practice, the question heading into the first day of practice in Abu Dhabi was how much would Verstappen be compromised this weekend by having to miss out on the first hour of running.

Fortunately for Verstappen and his team, Red Bull junior Liam Lawson successfully kept all four wheels on the circuit for the full 60 minutes of the earlier session. Once it was Verstappen’s turn in the evening, he duly delivered the quickest time of the day to sit more than three tenths ahead of last weekend’s winner, George Russell.

“It was alright, to be honest,” came Verstappen’s nonchalant response to sticking his car to the top of the times sheets on his only session of the day. “I think the car was in a good window. I think Liam did a very good job in FP1, just calm and steady – that’s all what we want, right?

“In FP2, no real problems. I mean, the car was in a good window. We tried a few things. And in the long run also the car was working quite well. So I’m pretty happy with that.”

Despite having won so many races since the end of the summer break, Verstappen has not always enjoyed a clear advantage over his rivals heading through a race weekend. But given the apparent margin he held on Friday, he was able to accept that he “should be” competitive heading into qualifying on Saturday and the race beyond it.

Looking at the times, it’s clear to see why Verstappen is happy. As well as being three tenths faster than the Mercedes over a single flying lap on soft tyres, Verstappen’s higher fuel run on the medium tyres looked rather favourable compared to Russell – the quicker of the two Mercedes drivers.

Over six timed laps on medium tyres over the final half of the session, Verstappen’s average lap time was a 1’30.477 – almost exactly two tenths of a second a lap quicker than Russell’s nearest comparative six lap run. The Mercedes driver was clear in his mind that Verstappen and Red Bull had the edge at the conclusion of the first day of running. Something that Russell was not surprised about, due to the characteristics of the Yas Marina circuit.

“The race run, [we were] a little bit behind Red Bull,” Russell admitted. “We know they’ve got a really slippery car down the straights, very efficient. On a circuit like this, with two long straights and lots of slow speed corners, this kind of suits them down to a tee.”

However, just the fact that Mercedes appeared to be the closest to Verstappen was encouraging enough for Russell. “I’m pleased we’re much closer than we were, let’s say, at Spa, where it’s not too dissimilar to this.”

It was not all satisfactory for Mercedes, however. Comparing their data to Red Bull and Ferrari, the team’s trackside engineering director Andrew Shovlin noticed that they could have more difficulties with their tyres than they have at most points during the season.

“Unusually, the degradation looked higher than for our competitors, so we’ll dig into that to work out what is causing it,” Shovlin explained. “That’s our biggest concern right now.

“Clearly a bit to do, but the gaps don’t look massive so hopefully we can put ourselves in contention if we can find a few small steps in the right direction.”

Meanwhile, Ferrari’s relative lack of performance compared to Red Bull and Mercedes was so evident, it could be seen without the team having to take a deep dive into the data. Towards the end of the session, Charles Leclerc asked race engineer Xavier Marcos Padros how his pace was looking compared to the two ahead of him in the standings. He would not have been encouraged by the answer.

“Our pace is not great at the moment,” came the reply. “Pace is similar to last race. Slightly slower than the Mercedes and Red Bull – around two tenths.”

Leclerc’s long run on the mediums averaged a 1’31.136 – around half a second a lap slower than Russell’s pace with Verstappen even further ahead. However, he did at least set the quickest time of the day on the medium compound. Like Mercedes, Leclerc was experiencing a drop off in his tyres through the long run – only his was one Ferrari had anticipated.

“We struggled a bit with the race pace due to tyre degradation, which was expected,” Leclerc explained. “Our qualifying pace was a little better, but our competitors seem to be a step ahead.”

While not in the fight for the win this weekend, there are some crucial battles for final championship position to be resolved – namely between Alpine and McLaren for fourth, while Alfa Romeo and Aston Martin will battle each other for sixth. At the end of Friday, Alpine clearly had more reason to be cheerful than McLaren, with both Esteban Ocon and Fernando Alonso quicker than both McLaren drivers, while Valtteri Bottas was left feeling confident after he had ended both sessions in the top half of the field.

“I finished both sessions in the top ten, which is definitely a promising start,” Bottas said. “On the back of the last couple of races, where we were quite strong, it’s a good sign and hopefully we can keep this momentum going.”

But none will be happier heading into qualifying than the world champion. Having secured pole position for the last two races in Yas Marina, it’s difficult to see how he can be easily prevented from taking a third.

“Just very happy with how that session went for me,” he stated. “Of course you always try to find a few things, but overall it was good.”