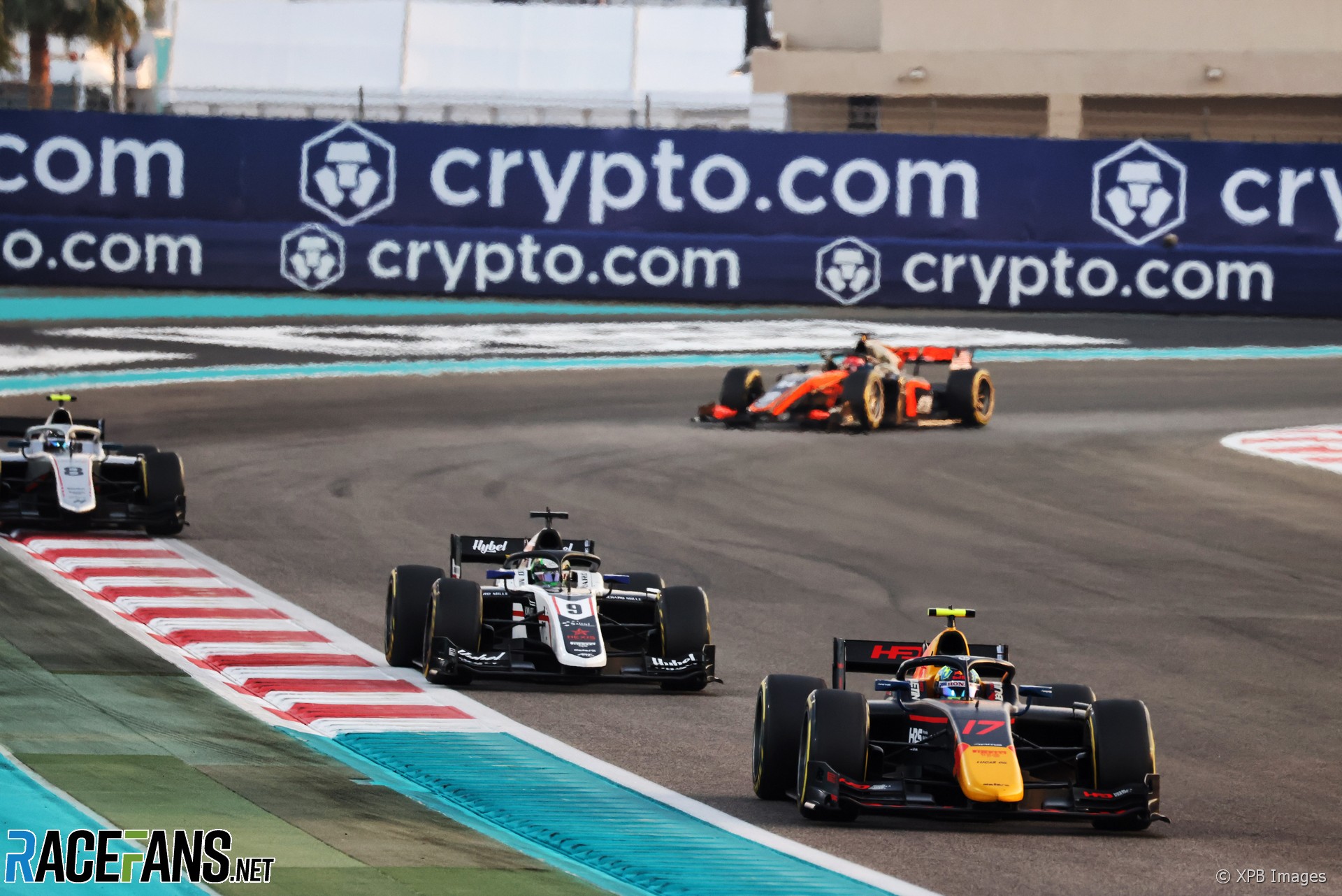 Iwasa had taken pole during Friday’s qualifying session, team mate Roy Nissany joining him on the front row for DAMS’ first front row lockout for a decade. At the start, the two went wheel-to-wheel, with Nissany slightly ahead into turn one, however by turn six Iwasa had secured the lead.

Liam Lawson pushed Logan Sargeant wide, the Williams hopeful forced to go over the kerbs in order to remain on the track and keep his hopes of securing a superlicence alive.

Ralph Boschung spun on the entrance to turn nine, causing a brief yellow flag after his car stopped, which became a Virtual Safety Car to retrieve the Campos. Unable to pit under VSC or in the opening laps, drivers on soft tyres were unable to take any advantage.

Nissany’s pace dropped off rapidly on the restart, Iwasa able to draw away and deny his team mate DRS. Drugovich had no such issues, cleanly passing Nissany on lap six, before Pourchaire almost did the same a lap later, only for Nissany to fight back through turn nine.

Pit stops started on lap eight, Dennis Hauger and sprint race winner Liam Lawson the first to pit. Iwasa and Théo Pourchaire followed on lap nine, with Drugovich pitting on lap ten and Sargeant finally coming in on lap 11. Aggravated, he asked Carlin why he had pitted so late, audibly stressed on the radio as he found himself behind team mate Lawson, the driver who could take third in the standings from him most easily.

At the front of the pack that had pitted, Lawson was harassing Drugovich for net second, on lap 14 and forced an error from the 2022 F2 champion that allowed him to take the position from the MP driver.

Jack Doohan was on the alternate strategy, starting on a medium tyre. By lap 20 he had an enormous lead, although still needed to pit. Marcus Armstrong was issued a five-second time penalty for track limits infringements, already more than six and a half seconds back from Doohan and sliding half a second further back by lap 21.

Doohan finally pitted on lap 26, giving the lead on track to Enzo Fittipaldi but with Iwasa just behind him. Doohan’s pit stop, however, turned disastrous, his front left tyre coming off seconds after emerging from the pits. Other drivers managed to avoid the loos wheel on the run down to turn five and Doohan pulled off to the support paddock pits, his race undone.

A brief Virtual Safety Car to retrieve the wheel ended on lap 28 with Drugovich right behind Iwasa. However, the DAMS driver was able to run more than a second down the track almost immediately, keeping Drugovich from having DRS.

Sargeant claimed sixth place from Nissany into turn one of lap 30, then almost immediately gained another place for fifth as Pourchaire’s ART gave up two laps before the end of the race.

Drugovich refused to halt his hunt for the win, while Iwasa was equally determined not let him have it. A speculative move around the outside of turn 12 kept Iwasa under heavy pressure, but he resisted. Suddenly, the race was once again neutralised by a Virtual Safety Car due to Olli Caldwell’s Campos stopping on track.

The Virtual Safety Car ended on the final lap, as Iwasa and Drugovich crossed the control line for the penultimate time. Drugovich fought Iwasa hard around the outside of turn nine, but the DAMS driver held him off until the final corner, taking his second win of the season. Lawson followed the pair to take the final podium of the season in third.

Drugovich’s second place means MP claim the teams’ as well as drivers’ title for 2022, with Carlin beating ART for second place. Sargeant’s fifth place finish makes his superlicense secure, although Lawson passes him for third in the 2022 title standings. Pourchaire remains second, despite his failure to finish.